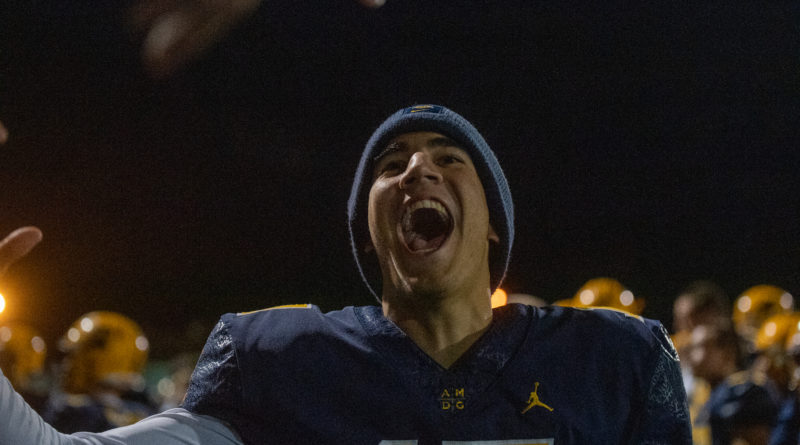 Aurora played the thriller of the second round, but the Greenmen fell in overtime to Dover, which went for two in overtime and converted.

The regional semifinals next week will be especially huge through the lens of SBLive’s Ohio Top 25, as No. 1 St. Xavier will play No. 4 Lakota West, and No. 3 Medina will take on No. 5 St. Ignatius (photo by Mike Cook).

HOW SBLIVE’S OHIO TOP 25 FARED IN ROUND 2

Top-seeded St. Edward had no problem with No. 9 Berea-Midpark, and No. 4 Canton McKinley is next.

Drew Allar was a force with his arm and his legs, leading Medina to another easy win and a regional semifinal date with St. Ignatius.

Lakota West cruised past Milford to earn a date with St. Xavier in a game that might feel more like a state semifinal than a regional semifinal.

St. Ignatius’ convincing win over No. 3 Stow shows how under-seeded the Wildcats were, leading to another regional semifinal that will feel more like a state semifinal at Medina next week.

Springfield’s dominant defense was on point Friday, and the offense wasn’t bad either. Up next is No. 6 Findlay in the Region 2 semifinals.

Braden Awls had two pick-sixes in another Central Catholic rout, and the Fighting Irish will take on No. 1 Highland next week.

Carson Gresock amassed over 200 yards on the ground as Upper Arlington sprinted away from a once-close game. The top-seeded Golden Bears take on New Albany next in a battle of unbeatens.

Avon dominated on the ground and through the air to move on to the Region 6 semifinals against Olmsted Falls.

As has been the case throughout 2021, Chardon has one of the easiest wins in the Top 25. Up next for the top-seeded Hilltoppers is No. 4-seeded Canfield.

Pickerington Central’s defense was too much for Hilliard Bradley, as the Tigers move on against Pickerington North for a chance to avenge their only loss and reach the regional final.

Top-seeded Moeller scored a workmanlike win and will take on Princeton in the Region 4 semifinal.

Marysville got off to a quick start and cruised past Perrysburg and on to the regional semifinals against Whitmer.

Lamar Sperling scored five touchdowns as Hoban pulled away from Austintown-Fitch to set up a big game next week against No. 2 Nordonia.

Princeton survived a frantic Sycamore comeback attempt and has to regroup quickly before playing Moeller next week.

Massillon Washington made it look easy against Westerville South and will play top-seeded Big Walnut in the Region 7 semifinal.

Benedictine pulled away late after going back and forth with Riverside. Up next is No. 4 Walsh Jesuit at a neutral site.

Darby hung in there at 14-14 early at New Albany, but then running back Jadyn Garnes took over to earn the Eagles’ matchup against Upper Arlington in the regional semifinals.

Piqua entered the fourth quarter trailing 13-10 but pulled out the win and will play No. 5 Edgewood next week in the Region 8 semifinals.

Walsh Jesuit trailed 14-7 at the half but went on a 16-0 run to advance to the Region 5 semifinal against Benedictine.

Mentor suffered a hard-fought loss in Round 1.

Hudson controlled the game on the ground in the first half but couldn’t get anything going in the second.

T.C. Molk found Joey Farthing for the winning two-point conversion in one of the most exciting games of the entire season. Dover plays No. 3 Kenston next.

Nate Severs’ big night on the ground and the Big Walnut defense lead the Golden Eagles into the regional semifinals against Massillon Washington at a site to be determined.

Kings fell behind 31-7 at halftime and couldn’t recover, as Winton Woods advances to the Region 8 semifinal against La Salle.