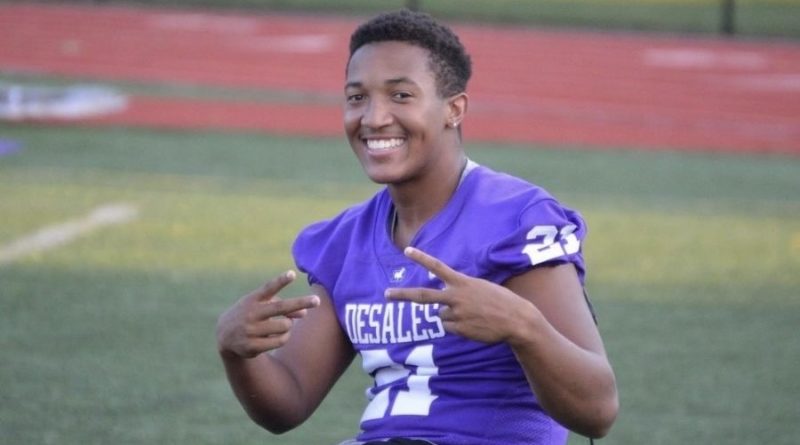 The senior linebacker had been named the Division III Central District Defensive Player of the Year and first-team all-state while leading St. Francis DeSales to the state final last season.

All of those expectations came to a crashing halt on Aug. 13, when the Cincinnati commit suffered a broken left ankle during the Stallions’ final scrimmage. On that fateful day, Thompson was tackled from behind while carrying the ball on a running play, and his left ankle was bent backwards.

“When I ran off the field, I thought that my ankle was sprained and that I’d be back on the field for our opening game the next Friday,” Thompson said. “So when I found out it was broken, I was shocked and I just couldn’t believe it. That was a heartbreaking moment, because I love football and I love my teammates, and I thought my season and my playing career at DeSales were over.”

Thompson’s recovery has exceeded expectations by coming back in time to lead DeSales’ defense once again, just as the Stallions are attempting to make another long run in the playoffs.

After pushing his ankle through two hours of often-painful physical therapy each day and working with a physical trainer at DeSales an additional two hours each day, Thompson was medically cleared to return to the field in the Stallions’ regular-season finale on Oct. 22 at St. Charles.

Despite being limited to only 22 plays, Thompson made an immediate impact in the Stallions’ 35-8 victory over the Cardinals, as he had three tackles for loss, including one on a fourth-down play.

“I was upset about my ankle, but it made me work harder, because I was motivated to get back on the field with my teammates,” Thompson said. “I was a little nervous before the St. Charles game, but I was also extremely excited because I had no doubt that I was fully healthy and ready to play again.

“I was a little tired because I’m only about 85 percent back into football shape after missing the first nine games. But I got a tackle for loss on St. Charles’ quarterback on my first play, and that felt amazing.”

Thompson looked even better in the Stallions’ Division III playoff opener against Sheridan on Oct. 29, as he racked up a sack, three tackles for loss and three quarterback hurries. He also deflected a pass that ended up being intercepted to help lead DeSales to a 21-14 victory.

“Jonathan’s still not in great football shape yet, but he’s healthy and getting back into shape, and he’s given us a huge boost,” said DeSales coach Ryan Wiggins, whose squad is 7-4 overall. “Coaches like to say it’s ‘next man up’ when a player is injured, but Jonathan’s a special athlete and a team leader, and you don’t have a scenario like that when a player of his caliber goes down. We had to have multiple guys step up to fill his role, and now that he’s back, he’s making our team better.”

Thompson was known more as a running back before he broke into the Stallions’ starting lineup as an outside linebacker during the last four games of his sophomore season, finishing with 61 tackles and 9.5 tackles for loss.

The 6-foot-2, 215-pound athlete then gained the attention of college recruiters across the nation during his junior season, when he racked up team-highs in tackles for loss (31.5), sacks (9), pass break-ups (5) and interceptions (5). Thompson also had 74 tackles and two forced fumbles.

“Jonathan’s strong, quick and athletic, and his versatility allows him to make plays in the backfield, as well as drop back into coverage,” Wiggins said. “I’ve never seen a player lead us in tackles for loss, sacks and interceptions in the same season before. He’s got great instincts. He knows when to rush the passer or stop a runner, and he’s even made two interceptions on screen plays.”

“They both motivate me to do my best to make them proud,” Thompson said.

Thompson credits his older cousins, Aaron and Trae Tiller, for teaching him how to play football. The Tillers both played as defensive linemen at Southern University, before playing in the Arena Football League.

He also said working with trainers Chuck Gresham and Kenny Stafford has taken his speed, strength and conditioning to a higher level.

Thompson comes across as humble and polite, answering many questions with “Yes, sir.”

Even after being recruited by dozens of Division I college coaches and receiving scholarship offers from 14 college football programs, Thompson didn’t let his success go to his head.

“Jon’s a great friend and teammate,” DeSales senior quarterback Whit Hobgood said. “Jon’s one of the most humble people I’ve met, and he never makes himself bigger than he is.

“When Jon came back from his injury, everyone was so excited for him, and he’s given our team a lot of confidence that we can keep winning big games in the playoffs.”

The eighth-seeded Stallions will play Friday at top-seeded Granville in the second round of the playoffs.

The Blue Aces are 10-0 overall, but DeSales defeated Granville 56-35 in the second round of the playoffs a year ago. Thompson had two interceptions in that game, returning one of them for a touchdown, and forced a fumble that was scooped up by teammate Matthew Stewart and taken 55 yards for a score.

Thompson is hoping he will get the opportunity to contribute to DeSales’ spread offense as a running back if the Stallions need a boost in the playoffs.

As DeSales’ No. 2 running back last season, Thompson rushed for 690 yards and seven touchdowns on 96 carries.

Thompson had some of his top performances in the playoffs, as he ran for a career-high 126 yards to help his squad beat Jonathan Alder 31-6 in a regional semifinal, and he had a career-high 12 tackles and 5.5 tackles for loss in a 31-28 double-overtime loss to Chardon in the state final.

“He’s a good running back, too,” Wiggins said. “He’s a big-play guy. He’s fast and powerful, and he has the ability to cut back and make people miss. When you’re in the playoffs, you don’t hold anything back, so we’ll see.”

Thompson is looking forward to playing for Cincinnati coach Luke Fickell next fall. Fickell, a 1992 DeSales graduate, has led the Bearcats to a 41-14 record. Cincinnati is 8-0 and No. 6 in the College Football Playoff rankings.

“When it came down to my decision, I knew that (Fickell) brings the same tradition that we have here at DeSales to Cincinnati,” Thompson said. “I want to earn my spot there and help Cincinnati be a championship team. I’m not sure what I’m going to study yet, but playing in the NFL would be my main goal.”

Of course, Thompson hasn’t forgotten that he still has some unfinished business to attend to before packing his bags for Cincinnati.

“This is my last chance to play with people who I have grown up with and known my entire life, and we just want to keep winning so we can keep playing football together,” Thompson said. “I’m grateful to get to play with these guys again because this is a special environment, and the bond we have is a brotherhood.

“I’m thankful for all of the blessings and opportunities in my life, and I’m doing my best to make the most of them.”