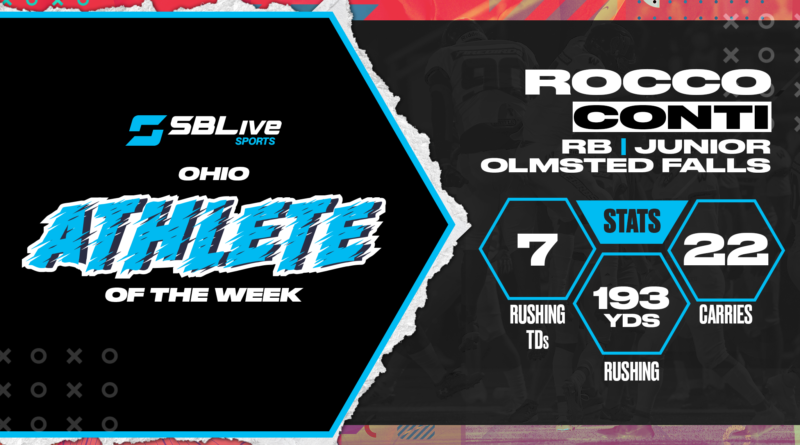 Congratulations to Olmsted Falls running back Rocco Conti for being voted SBLive’s Ohio High School Athlete of the Week for Oct. 18-24!

The junior had 22 carries for 193 yards and seven touchdowns in Olmsted Falls’ 63-49 win over Berea-Midpark.

Conti ran away with this week’s honor, receiving 62.67% of the total vote.

Alwood scored both of Canal Winchester’s goals in a 2-0 win over Westerville South, giving him 100 goals in his high school career.

Clark threw three touchdown passes and ran for another two as Central Catholic won its 18th straight Irish Knight trophy with a 49-7 victory over St. Francis.

The senior quarterback threw for 154 yards and two touchdowns, but he did most of his damage on the ground with 18 carries for 210 yards two more touchdowns in a 34-16 win over Woodridge.

Heron was a menace on defense and special teams in Avon Lake’s 49-27 win over North Ridgeville, blocking a punt and returning it for a touchdown and recording a 33-yard pick-six.

Hester’s five-touchdown night in a 38-7 win over Madeira gave the junior 34 on the season and put him over 2,000 yards.

Hopperton set a school record with his 11th touchdown reception of the season.

Medley carried 16 times for 297 yards and four touchdowns in Piqua’s 49-6 win over Stebbins.

Monnin had 210 yards on 14-of-17 passing and a career-high four touchdowns in Upper Arlington’s 42-14 win over Hilliard Davidson.

Reed earned co-state-champion individual honors in leading the St. Ignatius golf team to the state championship in Columbus on Saturday.

Roach outgained the entire Jackson team 104-103, including a 71-yard TD run that brought out the running clock in a 38-7 win.

Van Horn’s 178 yards passing made him the school’s single-season leader in that category, and he ran for another 49 as Green beat Lake 24-14.