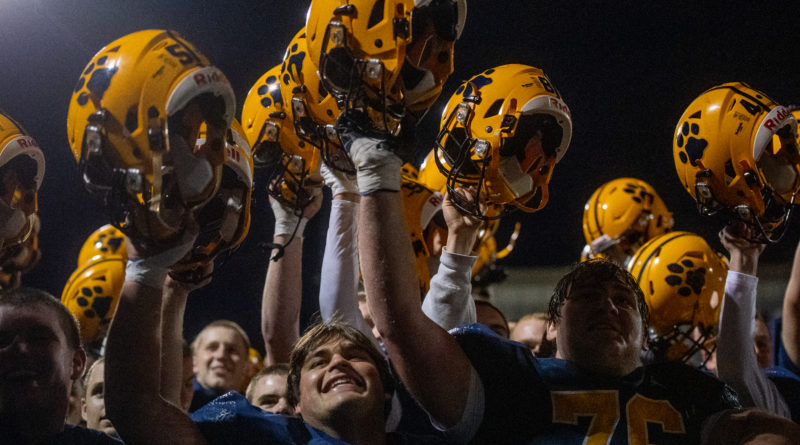 PARMA, Ohio — St. Ignatius senior running back Marty Lenehan took a handoff from backup quarterback Joshua Papesh and dove through the left side of his line, picking up 6 yards and allowing Ignatius to kill the clock and an astounding near-comeback attempt by Mentor.

It was fitting that the game-icing play came with the ball in Lenehan’s hands, as he and fellow senior running back Joey Georges served as a devastating one-two punch to lead the No. 6-seeded Wildcats (7-4) to a 35-32 victory over Mentor (5-6) on Friday at Robert M Boulton Stadium.

“They’re not ready for it,” Georges said. “They are expecting a hard punch, and then we just come out and change it up. It ruins their entire defense.”

Lenehan was the leading man in the first half, providing over half of the Wildcats’ yardage and both of their touchdowns. But in the second half, coach Chuck Kyle leaned more heavily on Georges, who out-carried Lenehan 18 to 7 after halftime.

“The type of runners they are, they have good vision,” Kyle said. “It’s a zone idea and you find a seam, and they both get north-south so nicely and just pound. They’re hard to bring down.”

By the end of the game the duo had combined for 252 rushing yards and three scores. Georges led the team in carries and yards with 22 and 135 (6 yards per carry), respectively, plus a touchdown.

Lenehan finished with 117 yards on 17 carries (6.8 yards per carry) with a rushing touchdown as well. He also caught both his targets for 20 yards and a touchdown, the first score of the game.

Far from resenting this split of production, Georges and Lenehan relish what their balanced running game does to opponents.

“He’s my brother,” Georges said. “I learned everything from him.”

Georges did not play running back for St. Ignatius until this year, and when he made the switch in the offseason, Lenehan welcomed him with open arms.

“It was the best decision you ever made,” Lenehan said, turning to his teammate. “(It was) great for the team, gives us a one-two punch. When I need a blow, he’s right there. When he needs a blow, I’m right here. And we just wear teams down.”

Behind that rushing attack and a stifling defense, St. Ignatius went into the fourth quarter up by 25 and dominating the Cardinals on both sides of the ball.

But when Mentor quarterback Jack Snow connected with Nick Farley for a 55-yard completion to open the fourth quarter, the Cardinals got rolling.

And then there was the 15-minute delay when half the stadium’s lights went out.

“That got exciting,” Kyle said. “Talk about momentum shifting. All of a sudden some of our cornerbacks were out, and they’re throwing the ball like they’re the Green Bay Packers. They weren’t gonna give up. It’s the playoffs, and they’re Mentor.”

Snow and running back Evan Harper seemed unstoppable in the fourth quarter, as Mentor scored seemingly at will and repeatedly halted St. Ignatius’ offense, scoring 23 unanswered in the fourth after scoring just 10 points in the first three quarters.

The game came down to an onside kick with just over two minutes to play, and despite a bobbled handle, the Wildcats would emerge from the pile with the ball and Lenehan would seal the win.

St. Ignatius has grown accustomed to games like this in 2021. The Wildcats have had six games decided by only one score, including all four of their losses.

“We’ve had games like this all year… coming down to the last second,” Kyle said. “So it’s OK. Step up (and) we gotta get it done. We can’t let it fall away. It doesn’t shock them that we had a game like this. We just had to respond at the end there, and we did.”

Georges agreed with his coach, but he said this game felt different.

Regardless of their loss, the Cardinals’ offense was astounding in the fourth quarter.

“(Harper is) so dangerous, whether he is at receiver, whether he’s at running back, whether he’s returning kicks. You have to know where he is and do your best, and he’s still electrifying,” Kyle said. “And then you see him in track season and he’s pretty good there too. He’s just a special, special athlete.”

Snow threw for 356 yards and a touchdown on 22-of-38 passing. He also rushed for 10 yards on three carries, but his elusiveness was on display as he evaded the St. Ignatius rush. Despite having defenders in his face all night, Snow continuously bought time and was sacked only once.

Snow’ targeted senior wideout Michael Norwood 21 times. Norwood put those looks to good use, catching 13 of them for 178 yards and the Cardinals’ only receiving touchdown.

The St. Ignatius passing attack was overshadowed by its run game and the near-heroics of Mentor, but it was effective in its own right.

Senior quarterback Joey Pfaff went 8-of-15 for 131 yards and two touchdowns. Along with Lenehan’s touchdown, he also found Max Murensan in the end zone for a 26-yard score.

Pfaff went down with an injury in the fourth quarter, walking off the field holding his left wrist. Sophomore Papesh filled in for the remainder of the contest, but after the game Pfaff was celebrating with his teammates and did not appear to be wearing a brace or in any pain.

The Wildcats will hope their quarterback is healthy and their running-back duo keeps rolling as St. Ignatius travels to play at third-seeded Stow-Munroe Falls next Friday.