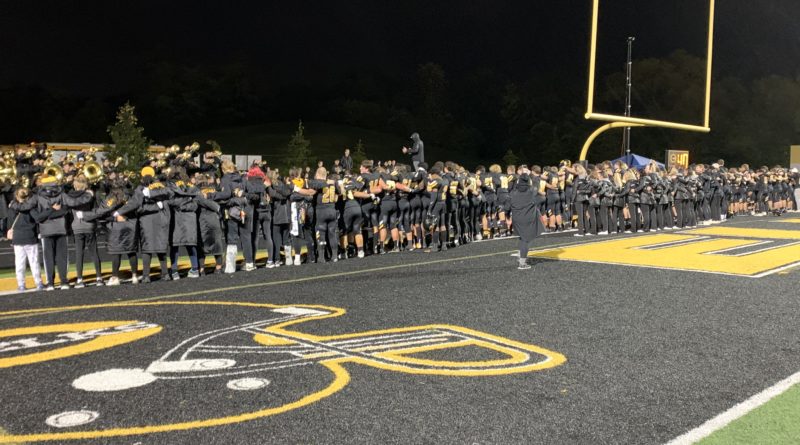 On a rainy, chilly night Friday in Centerville, the host Elks got off to an even colder start.

But the No. 5 seed rattled off 34 straight points to beat 12-seeded Springboro 34-14 and earn a trip to Toledo Whitmer next week for Round 2 of the playoffs.

“It’s the playoffs,”Centerville coach Brent Ullery said. “These guys know you win or go home, and these kids don’t want to go home.”

The Springboro defense shut down quarterback Chase Harrison and the high-powered Elks offense in the first quarter and most of the second.

And the Panthers have a star quarterback of their own, Sam Feldman, who got off to a hot start with a 73-yard touchdown pass to Mason Leach and a 5-yard TD run in the first quarter to give Springboro (5-5) a quick 14-0 lead at Centerville (8-3).

“Our biggest game plan was to stick together and take each quarter one at a time and we’ll be fine,” Harrison said.

A 5-yard touchdown pass to Ben Wise got Centerville on the board to leave the halftime score 14-7 Springboro.

The Elks got aggressive right out of the gate in the third quarter, recovering an onside kick, converting on a fourth and 6 before Harrison eventually hit Cameron Smith for a 20-yard touchdown to tie it 14-14.

“I was pressured often throughout the first half,” said Harrison, a Marshall commit. “They were trying to rough me up, but I embrace the pressure. I have my whole career.”

All the pressure was on Springboro for the rest of the game, as Harrison hit Ryan Keifer for a 24-yard touchdown and then ran for a 3-yard score, and all of a sudden an Elks rout was on.

“We just wanted to keep the game short and simple, execute what we know we can do well, and just try and keep the game in front of us and keep it moving,” Ullery said. “We weren’t trying to hit big plays, but that’s what was coming, and we wanted to take advantage of that opportunity while we could.”

He’s looking forward to Round 2 at Toledo Whitmer.

“I don’t know much about them,” he said. “The goal of this week was to get past the first round. Now tomorrow I expect to know all about them.”