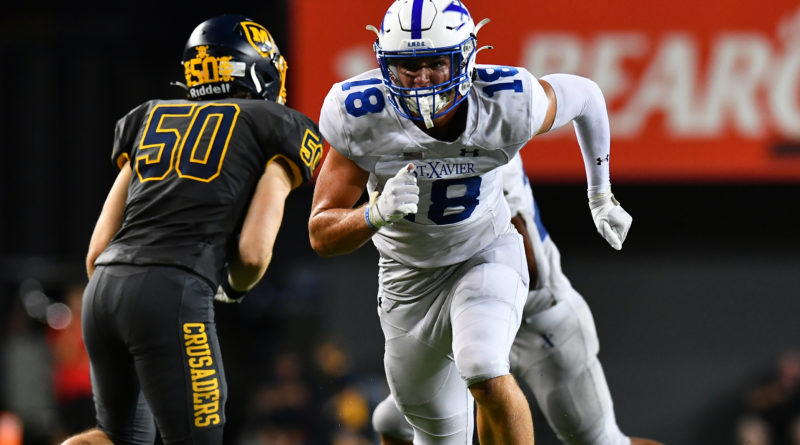 This is the final week we’ll be taking a position-by-position look at some of the top players in Ohio high school football.

We started this week with the state’s top running backs, now we finish with the tight ends.

There are thousands of standout football players in Ohio, and these lists are not intended to be comprehensive! Use the comments section to discuss the other tight ends worthy of fans’ attention in 2021.

Charlie Kenrich is a 6-foot-4, 220-pounder who can line up at tight end, wide receiver or running back, but he’s most likely to play tight end in college at Purdue. Kenrich is a versatile athlete who can impact as a runner, receiver and blocker, and he’s an exceptional route runner.

Dylan Novak is one of the best vertical threats on this list at 6-foot-3, 205 pounds. Novak is sure-handed and is most dangerous as a receiving threat — as his 1,058 receiving yards this season prove — but he can also make an impact in the running game with exceptional blocking.

Jared Dunfee is one of the most underrated tight ends in Ohio. Dunfee is used all over the field for Kent Roosevelt and plays most of every down whether at tight end, fullback or outside linebacker. On offense he’s mostly asked to take on huge blocks to open up the running game, but the two-sport star (baseball) also is an excellent possession receiver.

Elijah Brown, the No. 13 tight end in the country and a top 300 overall prospect, has been committed to Alabama since February. A 6-foot-5, 230-pound athlete with great hands, Brown had a slew of other Power Five offers such as Notre Dame, LSU, Auburn, Penn State and USC. He embraces his role as a blocker in addition to making big catches.

Brody Foley is a 6-foot-6, 235-pound tight end who’s committed to Tennessee. Foley will help the Volunteers run the football with his physicality and should excel in Josh Heupel’s up-tempo offense. He also excels as a pass rusher for Anderson.

The 6-foot-4, 225-pound Max Klare adds not only versatility at the tight end position, but also stars on the St. Xavier baseball team. Klare has great hands, is an excellent blocker and will take his talents to Duke at the next level.

Antwone Woolfolk is a 6-foot-8, 250-pound tight end/defensive end from Cleveland who’s committed to play basketball for Rutgers, but he has a chance to be a two-sport star at the next level. While a great forward on the court, Woolfolk has excelled on both sides of the ball on the football field whether catching touchdown passes or sacking the quarterback.

Two-star Lafayette commit Hunter Hopperton is a complete package who can block and catch, and he even showed off his arm in a recent game with a bomb to his wide receiver brother, Preston. Hunter Hopperton also excels as an edge rusher for Streetsboro.

Lucas Stoddard converted from offensive tackle to tight end this season, and the move has paid off for him and his team. Stoddard has 581 yards receiving and eight touchdowns this season, showing impressive speed on long TDs of 80, 79 and 63 yards.

Kenneally can handle the ball on the perimeter of the basketball court despite his 6-foot-7 height, but he’s emerged as an even more dangerous inside receiver and tight end on the football field. The transfer from Holy Name has improved tremendously as a blocker and is committed to play football at Youngstown State.

The 6-foot-4, 245-pound Josh Kattus is the son of former Michigan and Cincinnati Bengals tight end Eric Kattus. The Kentucky commit has gotten better as the season has gone on, putting up two huge games in back-to-back overtime wins over St. Ignatius and St. Edward.

Alex McDonald’s blocking is what earned him recognition after his junior year, as the Hilltoppers rushed for 3,600 yards on their way to the state championship. The 6-foot-3, 230-pound McDonald joined teammate Nathanael Sulka in committing to Youngstown State in August.

At 6-foot-4, 250 pounds, Schillinger is a throwback tight end who can throw pancake blocks like an offensive tackle, but he’s been a reliable receiver this year as well. Schillinger also starts at defensive end for the Shoremen.

Mason Williams is a sure-handed receiver and sound blocker who also punts and plays defensive end for Mogadore. He also plays baseball and basketball. The 6-foot-4, 230-pound junior is a picture of versatility who’s drawing some interest from Kentucky.

Malachi Edgerly is a 6-foot-4, 217-pound tight end who’s an aggressive blocker but can also be a threat downfield. He is a sure-handed, speedy tight end who can make big plays happen when targeted in the passing game.

Jackson McGohan made the touchdown catch that led to the winning two-point conversion in Miamisburg’s win over Springfield this season, and the junior has been making big catches all year. The 6-foot-4, 208-pounder with nine TD grabs this season can play wide receiver or tight end, but he’s more likely to play tight end at the next level.

Patrick Lange has a tremendous motor whether he’s playing wide receiver, tight end or defensive end. The 6-foot-3, 200-pounder stretches the field for his offense and sets up the run well with his solid blocking skills despite being a bit undersized as a tight end.

Sam Cannon is quarterback Simon Monnin’s deep threat, and the 6-foot-3, 220-pound Carter Brock is the guy he often finds over the middle or on jump balls in the end zone. Brock is also an excellent blocker for star running back Carson Gresock and a solid linebacker on defense.

The Blue Lions of Washington Courthouse have one of the top juniors in the state in Tanner Lemaster, an athletic tight end who also plays baseball and basketball. The three-star prospect has an ideal frame for a tight end at 6-foot-6, 235 pounds, and he’s named a top four of Cincinnati, Tennessee, Kentucky and Indiana.

A 6-foot-6, 215-pound tight end, Ryan Miller had high hopes for a big senior season but suffered fractures to his vertabrae in Week 3 while recovering an onside kick. Although he’s missed most of the season, the Indiana commit still has to be mentioned as one of the best tight ends in the state.