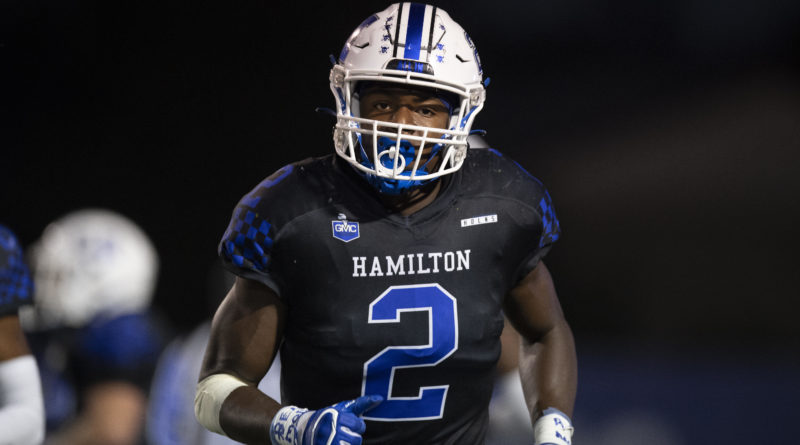 This is the final week we’ll be taking a position-by-position look at some of the top players in Ohio high school football.

Today we turn our attention to the state’s top running backs.

There are thousands of standout football players in Ohio, and these lists are not intended to be comprehensive! Use the comments section to discuss the other running backs worthy of fans’ attention in 2021.

Pictured above is Hamilton’s Kaleb Johnson (photo by Ben Jackson), who recently flipped his commitment from Cal to Iowa.

Three-star Purdue commit Kentrell Marks is a 6-foot-1, 190-pound running back who scored 23 touchdowns and rushed for 1,470 yards last year in just eight games. Marks electrifies the Wing-T offense he runs in, playing the role of a power back with exceptional speed.

Stephan Byrd committed to Cincinnati over offers from Akron, Ball State, Iowa State, Miami University, Michigan, Minnesota, Pitt, Tennessee, Toledo and West Virginia. He’s had some injury troubles as a senior but rushed for 1,000 yards in double-digit touchdowns as a freshman, sophomore and junior.

As a junior, the 6-foot-1, 200-pound running back had 789 yards rushing in the same backfield with senior Keyshawn Stephens, who had 1,115 as a First Team All-Ohio selection. Johnson has been the team’s workhorse as a senior, and he recently flipped his commitment from Cal to Iowa.

South should always be a stop for a college looking to make a splash with skill position players, whether it was Kareem Hunt before his Toledo and NFL days or more recently Rico Small (now at Eastern Michigan). Cincinnati and Iowa State have been looking at Sampson, who excels on both sides of the ball for South.

Three-star Bowling Green commit Jaylen Jennings has elusive running skills. He’s a one-cut back who gets in open space and makes plays. Jennings has the ability to make defenders miss with good stop-and-go moves.

Three-star running back Tyron Darby has offers from schools such as Buffalo, Cincinnati, Marshall and Kent State. Darby can be a freight train with his relentless, downhill running style, and he refuses to go down on first contact.

Sperling has emerged as Archbishop Hoban’s workhorse running back in his junior year. The 5-foot-10, 180-pounder racked up 151 yards on 20 carries en route to scoring all four of the Knights’ touchdowns in a big win over previously undefeated Benedictine.

Zadan Abuhamdeh has been a bruiser on both sides of the ball in his four-year career with North Royalton. The 6-foot-2, 220-pound power back is a beast in short-yardage situations as a runner, and he’s a terror on the other side of the ball in the same situation.

With an Akron offer entering the season, Kennedy rushed for 917 yards and 10 TDs. His play at linebacker could translate to the next level, too. Rayshon Kennedy is 6-foot-4, 240 pounds and a load to bring down at running back. He bullies defenders out of tackles.

A bruising four-year starter, Linberger has rushed for at least 1,000 yards in three straight seasons, and he excels in the classroom with a 4.2 GPA. The 5-foot-11, 210-pounder posts most of his scoring touchdowns on hard, power running.

Despite battling injuries, four-star Indiana commit Gi’Bran Payne is the top-ranked senior running back in Ohio. After missing most of his junior year with a high ankle sprain, he’s gotten back on the field as a senior to show his top-level combination of speed and power.

Aiden Lal has missed time late in the season with an ankle injury, but the Air Force commit has still amassed over 1,000 yards rushing in his senior season. The 6-foot-2, 210-pound Lal is a load to bring down, and Hudson hopes to have him back for the playoffs.

Running back and return specialist Marty Lenehan plays at one speed — fast. He makes one cut as soon as he receives the ball and takes off. Once he gets past the first barrier into the open field, he tends to turn plays into track meets with his getaway speed.

Preston Taylor has the ability to make defenders miss with a patient style of running similar to Le’Veon Bell. Upon receiving the ball, Taylor waits patiently to find a hole, and once he sees it he turns on his speed to race past opposing defenders.

The 6-foot, 190-pound back for the Division I champs ran for 855 yards and 10 touchdowns as a junior and has amassed 846 yards and 18 touchdowns as a senior. Kellom is currently undecided and fielding offers, including a recent one from Colgate.

Multi-positional athlete senior Timothy Caffey is bigger, stronger and faster than he was last year, and it’s showing up in his stats. Caffey says he’s added 20 pounds of muscle and improved his 40 time. He’s also the strongest player on the team, benching over 350 pounds and squatting 550. Caffey has run for 2,200 yards this season, tops in Ohio.

Hester, who is listed at 5 feet, 11 inches and 185 pounds, showed his versatility on the field last week when he scored five touchdowns in a 38-7 win over Madeira. Hester is No. 2 in rushing yards with 2,036 rushing yards, to go along with 34 TDs. He has speed, strength and the ability to make defenders miss.

Multi-sport athlete Austin Francis has 1,621 rushing yards on the year with 17 touchdowns. Francis has a tendency to bust for huge runs with his exceptional getaway speed.

Jackson Rohrs has had a great senior season, with 1,770 rushing yards and 24 touchdowns. Rohrs has been the leading contributor in the success of his team. He takes advantage of poor tackling and uses his speed to make up for the rest.

Senior running back Jason Munyan has had a tremendous impact on the success of his team this year. He has 1,559 rushing yards with 23 touchdowns. Munyan has elusive running skills. When he touches the ball, it’s one cut and he’s off to the races.