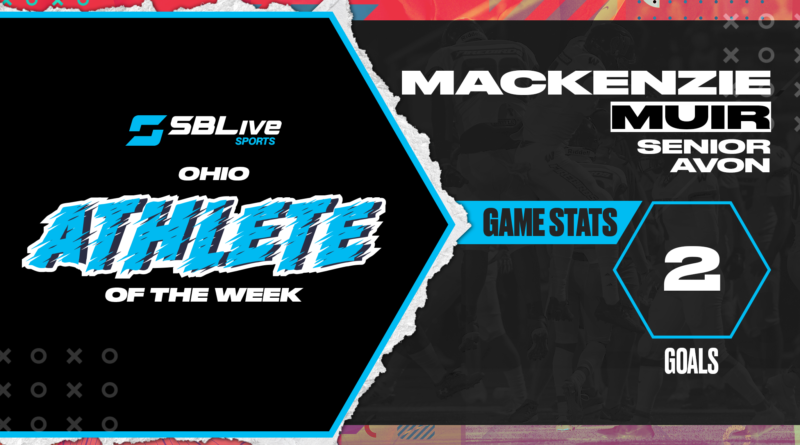 Congratulations to Avon soccer star Mackenzie Muir for being voted SBLive’s Ohio High School Athlete of the Week for Oct. 11-16!

The senior scored in the 53rd and 70th minute to secure Avon its first Southwestern Conference girls soccer title.

Muir received 55.3% of the vote, beating out Amherst Steele’s Luke Bowlsby who finished second with 22.39%. New Albany’s Jadyn Garnes finished third with 10.81% and La Salle’s Jaylen Deleon finished fourth with 4.49%. There were over 18,000 votes tallied this week!

Here are the other athletes who were nominated for Oct. 11-16:

Hammer piled up 302 rushing yards on 26 carries and scored four touchdowns in a 43-0 victory over Maumee.

Kamara was the leading rusher in Pick Central’s 34-8 win over Lancaster, with 156 yards and three touchdowns on just 10 carries. Kamara had 46- and 75-yard touchdown runs on the night.

Clute secured the individual Southwestern Conference Championship for the third year in a row, covering the 5K course in 19:31.68.

Garnes rushed for 148 yards on 21 carries with one rushing and one receiving touchdown, propelling New Albany to a comeback victory over Pickerington North.

Among Ighnat’s three field goals was a 31-yard game winner as the clock hit zeros to secure Davidson’s win over Olentangy Liberty. Ighnat’s two field goals in the final four minutes helped advance Davidson to 7-2 overall and 3-1 in league play.

After being the first in school history to reach 1,000 digs, Smith and company went on to secure the LCL Championship.

Pallay threw for 366 yards on 32 completions in Hudson’s OT win over Brunswick. Pallay’s Friday night display was his most passing yards on the season.

Deleon secured La Salle’s 24-0 shutout victory over Trotwood-Madison with a fourth-quarter pick-six with 10:51 to play.

Wenzel continues her reign over all Ohio high school soccer, leading in goals with 43 and fourth in assists with 21.

Jackson had a 37-yard touchdown run in the fourth quarter that secured Fairfield the upset win over No. 18 Lakota East. Jackson rushed for 123 yards on just nine carries.

Bolden ran in the game-securing touchdown to lift Lakota West over Colerain 21-3. Bolden rushed for 84 yards and threw for 103 yards and a touchdown.

Kocher’s touchdown on the ground and in the air steadied the No. 24 undefeated Kings to a 35-21 win over Turpin. Kocher completed a 42- and 70-yard touchdown pass and a 69-yard touchdown run. It was his fifth game of the season with both a rushing and passing touchdown.

McGohan reeled in three touchdowns in Miamisburg 22-21 upset over No. 2 Springfield. McGohan’s third touchdown came with eight seconds to play, setting up the game-winning two-point conversion.