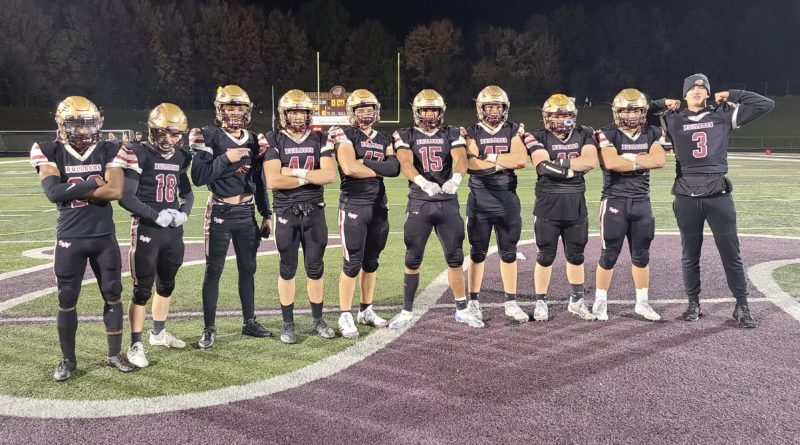 STOW, Ohio — After a thrilling game for the Suburban League National Division championship came down to the final play in a 22-21 win for Stow-Munroe Falls over Hudson on Friday night, both teams must shift their focus to the playoffs.

The teams share some similarities heading into the second season.

By finishing with a top-4 seed in the computer rankings in their respective regions, both have earned the right to host games in the first two rounds of the playoffs, should they win in the first round.

Both teams will also be heading into the playoffs dealing with injury concerns.

Stow knows it will be without starting quarterback Owen Bainbridge, while Hudson is unsure if it will have the services of running back Aiden Lal once the postseason begins.

The first round of the playoffs will be the fourth game for Stow without Bainbridge, as the Bowling Green commit was injured during a Week 7 loss to Wadsworth. The Bulldogs have turned to junior Nate Boozer and have won their last three games with an altered style of play.

“I think we are healthy still. I know we are without Bainbridge and (wide receiver) Jackson Norman, but we have been without those guys for a while now,” Stow coach Tom Phillips said. “The kids are responding to that, and I am happy.”

Missing Bainbridge and Norman means the offense turns almost exclusively to the ground attack. In the last two games, Stow has run the ball 110 times for 567 yards and has thrown the ball just 13 times, including a single pass attempt in the win over Hudson.

“We always knew we had the run game,” Phillips said. “The thing is, now we are using a lot of guys going both ways. That’s tough as the schedule goes on, but if that’s working, why break it?”

The ground game for Stow is led by senior Xavier Preston, who has 1,494 yards and 17 touchdowns on 197 carries. He is joined by junior Teddy Gregory, who has 157 yards and four scores on 32 carries in the last two games after carrying the ball just 15 times in the first eight weeks.

“For me, after being in the spread offense for a while, I am working on my patience with this run game,” Phillips joked after the win Friday night.

As for Hudson, the Explorers probably won’t know until right before the game if they will be without their star running back. Lal is dealing with an ankle injury and has played only one series in the last three games with one carry.

The Air Force commit injured the ankle in Week 7 against Nordonia and then missed Week 8 against North Royalton and tried to play in Week 9 against Brunswick before pulling himself out after the first series. He then missed the game against Stow.

Trying to replace Lal’s 1,096 yards and 16 touchdowns on the ground hasn’t been easy for Hudson, but senior Ryan Evans has stepped in and taken the bulk of the snaps at running back. The senior has run for over 100 yards in a game three times since Lal’s injury.

And Evans is doing all of this while also playing linebacker and being a staple on the Hudson defense.

“He has a motor that just goes 100% all the time, and it is rare to see those guys that really do that,” Gough said. “And then he just has that instinct for the ball and confidence in himself to make the play. He got a lot of reps last year on our defense, and you are seeing it this year.”

Hudson has also turned to the air attack in the absence of Lal, with junior quarterback Jagger Pallay putting the ball in the air 80 times combined over the last two games and has completed 50 passes for 621 yards.

While Lal might be the biggest name who isn’t healthy for the Explorers, they have numerous guys who are banged up after playing against two straight Division I teams to end the regular season.

But Gough acknowledges that all teams are dealing with nagging injuries at this time of the season and believes Hudson will respond to any adversity thrown its way.

“We try to get backups and everybody ready,” Gough said. “As hard as it is in practice, our staff does a great job of getting that next guy in so that when you see guys go down, we shouldn’t miss a beat. It’s just a matter of what you see on field. We are just trying to get our best players and the best matchups in the game.”

Despite the similarities between the two Suburban League rivals as they head into the postseason, the one main difference could be how the teams are feeling after their Week 10 matchup.

For Stow, it was the feeling of elation as the Bulldogs took home their first outright conference division title since 2015. Following the game, the Bulldogs weren’t looking ahead to what is in front of them, as they were too busy soaking in the atmosphere of their win.

“We are just going to celebrate tonight and prepare for whoever we draw,” Phillips said. “But whoever we get, we are going to have to prepare like we did this week because we had a great week of practice. The kids were focused and locked in with a championship on their mind.”

On the other side of the field, Gough and the Explorers had to decipher what had just happened, as Hudson had the lead until the final minute of the game with their first outright conference division title since rejoining the conference in 2005 in their sights.

Gough said that a safety by Stow early in the fourth quarter that cut the Hudson lead to 21-16 — giving the Bulldogs a chance to take the lead with the late touchdown — was “totally on me and the difference in the game.”

“We all have to look at each other and make sure we are prepared for the next time,” Gough said. “It’s tough for them to handle because they are competitors, and they have grown up always wanting to win. But we have to take that and bottle it up and bring it out next Friday night.”