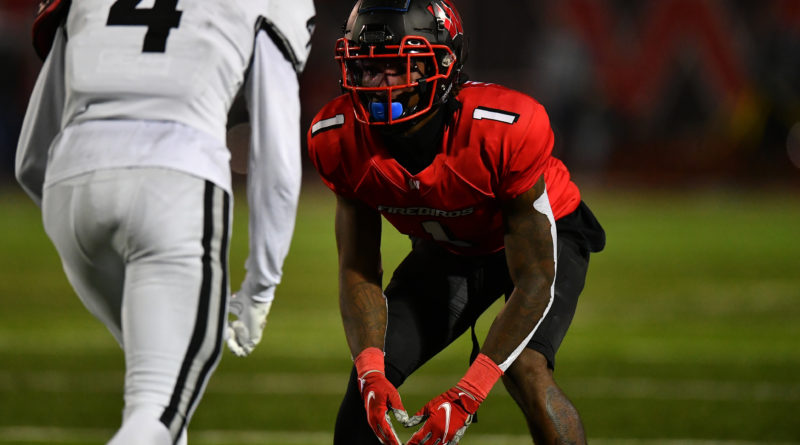 Pictured above is Lakota West’s Jyaire Brown (photo by Ben Jackson), an Ohio State commit who had one interception and caused another Friday against Lakota East.

Hester’s five-touchdown night in a 38-7 win over Madeira gave the junior 34 on the season and put him over 2,000 yards.

Conti had 22 carries for 193 yards and seven touchdowns in Olmsted Falls’ 63-49 win over Berea-Midpark.

The senior quarterback threw for 154 yards and two touchdowns, but he did most of his damage on the ground with 18 carries for 210 yards two more touchdowns in a 34-16 win over Woodridge.

Heron was a menace on defense and special teams in Avon Lake’s 49-27 win over North Ridgeville, blocking a punt and returning it for a touchdown and recording a 33-yard pick-six.

Monnin had 210 yards on 14-of-17 passing and a career-high four touchdowns, three of them to Sam Cannon in Upper Arlington’s 42-14 win over Hilliard Davidson.

Holt’s late interception sealed Anderson’s rivalry victory over Turpin in a defensive battle that ended 21-14 in the Redskins’ favor.

Brown had an interception to set up a touchdown and caused another in Lakota West’s 34-7 win over Lakota East.

Medley carried 16 times for 297 yards and four touchdowns in Piqua’s 49-6 win over Stebbins.

Roach outgained the entire Jackson team 104-103, including a 71-yard TD run that brought out the running clock in a 38-7 win.

Hopperton set a school record with his 11th touchdown reception of the season.

Orosz recorded a safety that proved to be the difference in Stow-Munroe’s 22-21 win over Hudson to win the 2021 Suburban League National Division.

Martinez hit the game-winning field goal in the final seconds to lift Monroe to a 16-14 win over Eaton.

Van Horn’s 178 yards passing made him the school’s single-season leader in that category, and he ran for another 49 as Green beat Lake 24-14.

Clark threw three touchdown passes and ran for another two as Central Catholic won its 18th straight Irish Knight trophy with a 49-7 victory over St. Francis.