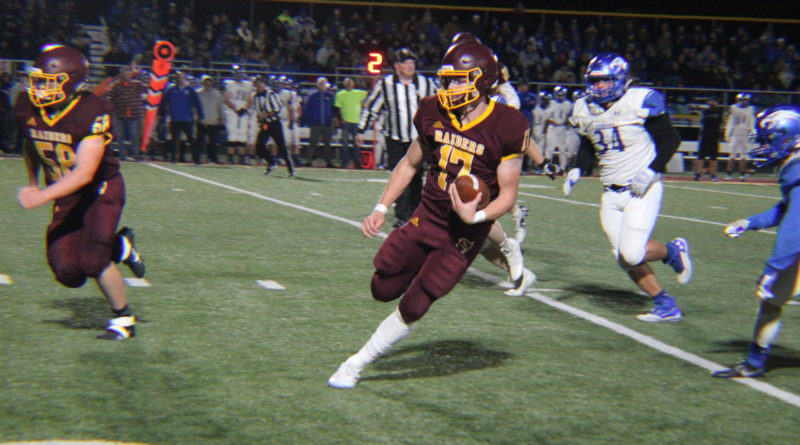 Story and photos by Lowell Spencer

CANFIELD, Ohio — At this time of year, a big victory can carry a team confidently into the playoffs, while a disappointing loss can take the luster off an otherwise successful season.

Friday night featured a huge battle between two undefeated teams in the Hubbard Eagles and the South Range Raiders for a winner-take-all tilt in the Northeast 8 Conference. Both teams entered the contest with 9-0 records, but South Range raced to an easy 34-0 win.

“We’re going to ride the momentum,” Raiders senior linebacker Logan Cormell said. “That was a good win to end the regular season going into the playoffs, but we still need to go week by week and still execute. Hubbard prepared us a lot for the playoffs. They are a good running team, and we showed that we could stop a running team.”

The game had huge playoff implications for both teams. According to the Joe Eitel website, Hubbard entered the contest fourth in computer points for Division III, Region 9. The Raiders were second in Division V, Region 17.

Although the Eagles are two divisions larger in enrollment, the Raiders dominated the contest from the opening kickoff to the final gun.

South Range contained the Eagles’ powerful rushing attack to only 158 yards, while holding running back T.C. Caffey to 71 yards on 19 carries. He entered the game with over 2,220 yards on the season.

The Raiders, on the other hand, used a balanced offensive attack, accumulating 343 total yards with 184 on the ground and 159 through the air.

Running back Dylan Dominguez rushed for 84 yards on 16 carries and a touchdown, while quarterback Billy Skrpac connected on 7 of 12 passes for 159 yards and two scores.

Hubbard entered the contest having already secured a home game in the first round of the OHSAA playoffs that begin next Friday, most likely against New Philadelphia. But the Eagles will need to have a short memory if they want to make a run in the postseason.

“I’m an honest person,” Hubbard coach Brian Hoffman said. “I would say that I’m concerned because our kids put a lot of heart and energy into this week. To get this result is not what we wanted. We are going to have to go back to the drawing board from all aspects and find out who our opponent is and prepare so we can see what happens.”

The Raiders, on the other hand, can use their dominant victory to help propel them to yet another long tournament run.

“Obviously, it is a momentum builder,” South Range coach Dan Yeagley said. “We want to keep it going because we want to make a run in the playoffs. We know every game is going to be tough from here on out. There are no bad teams.”

With three-time state champion Kirtland in the same region as the Raiders, a seeding situation where the Raiders don’t have to face the Hornets until the regional championship would be ideal.

The victory over the Eagles should lock up the second seed in the region, right behind the top-seeded Hornets. A No. 2 seed should set up a game next week against Rootstown.

Although the Raiders were pumped up and celebrating the victory, Yeagley has no doubt his team will not suffer any letdown next week.

“We’re going to carry this emotion right into the playoffs,” Yeagley said. “We are going to use this (victory) as a building block to just keep it going.”

For the Eagles, next week will demonstrate how quickly they can put a disappointing loss behind them. The Raiders will look to ride that emotional wave right to the regional finals.

“We have high hopes in the playoffs,” senior South Range running back Connor Jones said. “Honestly, it is week after week, one team at a time focusing on the next team. We’re not really thinking about them (Kirtland) yet.”