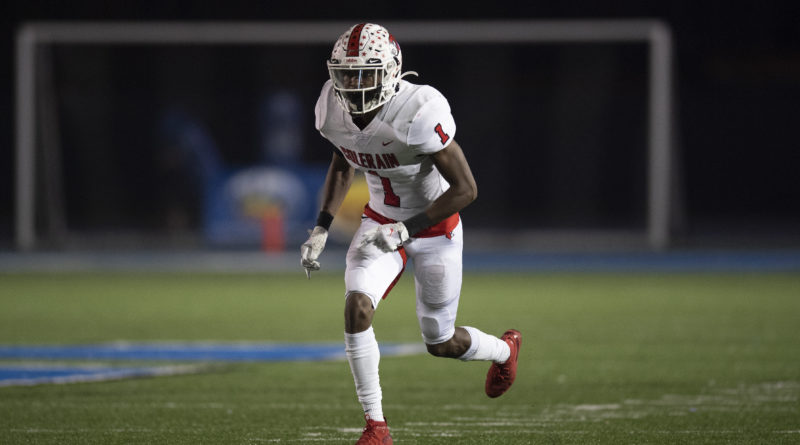 There are thousands of standout football players in Ohio, and these lists are not intended to be comprehensive! Use the comments section to discuss the other defensive backs worthy of fans’ attention in 2021.

Pictured above is Colerain’s Ken Willis (photo by Ben Jackson), who’s committed to play for Cincinnati.

Four-star Ohio State commit Jyaire Brown is a natural cover corner with good size and speed to stay with receivers deep. Brown plays with swagger in a dominant Lakota West defensive backfield, and beyond being a Buckeye, he has the skills necessary to play on Sundays.

Three-star Delaney Wilburn is a 6-foot, 185-pound safety. Wilburn is a zone hawk who locks down a part of the field. His ability to create big plays using his good makeup speed to intercept the ball while in zone coverage is top-tier in his class.

Three-star Cincinnati Bearcats commit Ken Willis has had scholarship offers from schools such as West Virginia, Marshall and Mid-American Conference programs. Willis is rated the state’s No. 31 player in the class of 2022.

Three-star Charlotte commit Aveon Grose is a physical 6-foot, 190-pound safety. Grose originally committed to Pittsburgh last September but began to have second thoughts in June when he was asked to grayshirt, so he switched to Charlotte. He is ranked as the 39th overall player and the No. 3 safety in 247Sports’ composite rankings.

Three-star Miami (Ohio) commit Eli Coppess is a 6-1, 200-pound safety who pairs great athleticism with exceptional footwork. He covers tons of ground and can easily cut off underneath routes to throw the offense out of rhythm.

Five-star safety Alex “Sonny” Styles is a physical prototype at safety with height, length and strength, and at 210 pounds he can still run with receivers man to man. Styles is a unique athlete who might grow into a linebacker or pass rusher, but for now the junior is simply one of the best safeties in the country.

Older brother Jordan starred at running back for St. Edward’s 2018 state championship run. In 2020, the Eagles enjoyed Joel and Jaylen Castleberry in their defensive backfield. Joel Castleberry excels at corner and safety, returns kicks and is a threat to block field goals and extra points from the edge.

Holy Name’s rise to the Division III regional finals came with a big year from Eric Jones Jr., who had 51 tackles, seven pass breakups and two interceptions. Jones understands that the best way to stop a route is to act early. He excels in press coverage.

Shawn Lodge has football in his blood. Father Shauntel Lodge played for Akron in the late 1990s and is a coach on the St. Vincent-St. Mary staff. It’s translated into a smooth game at cornerback for the 6-foot, 170-pound Shawn Lodge, who made the All-Inland District second team in 2020 as a junior.

A 6-foot, 188-pound cornerback, Markim McKinnie is a playmaker. After emerging as a speedy running back his sophomore season at Barberton, McKinnie transferred to Hoban in 2020 and transitioned into a lockdown cornerback. With premium footwork and speed at cornerback, McKinnie is a pass-breakup machine.

Three-star prospect Delian Bradley is a 6-foot, 185-pound athlete being recruited by Akron, Arizona State, Cincinnati and Kentucky, among others. Bradley can cover from sideline to sideline and has a knack for knowing where the ball is going before it gets there. His ability to bait QBs into believing their receiver is open is next-level.

Michael Harrison is a shutdown cornerback. The 6-foot, 180-pound corner has the talent to erase receivers from the game. When Harrison enters his zone, his coverage is tight and he excels in the air. If you’re thinking about throwing his way, you’d better make sure the receiver has a big cushion.

Two-star prospect Christian Kirenga is a physical 6-foot-1, 180-pound cornerback who has great vertical skills and the speed to stay with receivers in coverage. Kirenga has committed to play for Illinois State in college.

Montana Waller is a 5-foot-10, 170-pound multi-position athlete who prefers playing cornerback. Waller is fast and has tremendous makeup speed to cover at all levels on the field. Tackling isn’t his strong suit, but he makes up for it with great coverage skills.

Four-star Kentucky Wildcats commit Alex Afari is a 6-foot-2, 195-pound safety who is ranked the No. 9 athlete in the country. Afari’s play at safety and linebacker sums up his overall position best — and that is a pure athlete. He’s hands-down one of the most talented, versatile players in the 2022 class.

David Hamrick is a ball hawk who had eight interceptions in 2020 for the Blue Devils. Hamrick also had three pass breakups and finished fourth on the team with 39 tackles. He is not the guy you want to throw to.

St. Edward traditionally turns out talented defensive backfields, and 2021 is no exception featuring Dontez Howard Jr. and Joel Castleberr. Howard is a secure tackler and usually ends the play when he gets his hands on the ball carrier.

Griffin Taliak is as aggressive as they come at safety despite being just 5-foot-10, 170 pounds. What he lacks in height and weight, he makes up for in speed and heart. Not one to avoid contact, Taliak makes it in St. Ignatius’ strong defensive backfield.

Two-star prospect Isaiah Funches-Foster is a 6-foot-1, 176-pound cornerback with great height and speed for the position. His length earns him lots of pass breakups, and he’s capable of locking down some of the best receivers in Ohio.

Alexis Pacheco is your traditional, old-school strong safety at 6 feet, 185 pounds. Pacheco, who also sees plenty of time at linebacker, has great tackling skills and a knack for ending plays before they get a chance to start. Not one to be easily faked out, if Pacheco locks his eyes on you, the play usually just about over.