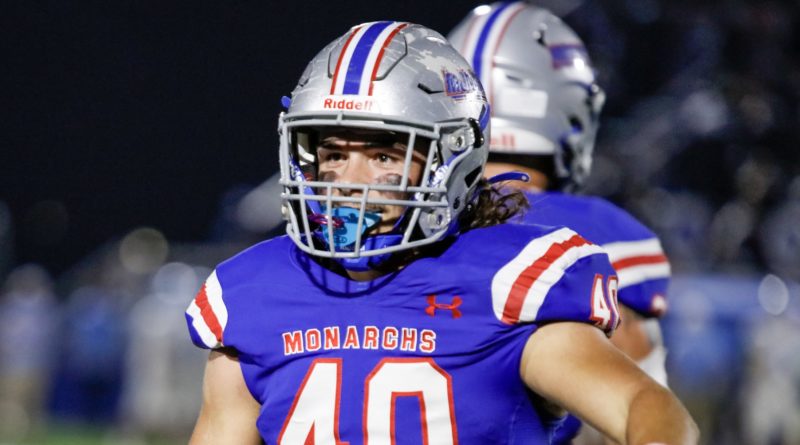 Standing 5-foot-9 and weighing 170 pounds, Erryl Will looks more like a cornerback than a nose guard.

With Will leading Marysville’s 4-3 defense in several statistical categories despite playing nose guard, the Monarchs are giving up an average of only 5.5 points and 165 yards per game.

Marysville is 8-0 overall and already has clinched a share of its second consecutive Ohio Capital Conference-Cardinal Division title with a 4-0 league mark.

“Erryl is considered way undersized for his position, and he probably hears that a lot, but it just goes in one ear and out the other,” Marysville coach Brent Johnson said. “He has continued to prove people wrong by making great plays as a varsity starter the past three years, and he’s really having a great season this year.”

What Will lacks in size, he more than makes up for in speed, quickness, technique and instinct.

In eight games, Will has team-best numbers in sacks (eight), tackles for loss (19) and fumble recoveries (four) on a defense that also features Ohio State linebacker recruit Gabe Powers, who was the Division I State Defensive Player of the Year last season. Will also has 46 tackles and two forced fumbles.

“Erryl is a very strong, physical player, and he can really run,” Johnson said. “He has a motor that won’t stop. He understands leverage, and he’s a very good hand-fighter. His quickness and anticipation give him an edge against larger opponents, too.”

Marysville senior defensive end Ben Bickerstaff, who questioned whether Will really is 5-foot-9, said the nose guard uses his diminutive stature to his advantage.

“I don’t know how tall Erryl really is, but I always joke around and call him ‘5-2,’ because he’s the shortest guy on our line,” Bickerstaff said. “But he uses his height to his advantage by getting underneath people, and he’s been beating up on bigger linemen for years. Erryl’s very competitive, and it gives him an edge. This man doesn’t want to lose at anything in his life.”

Will developed his physical strength, mental toughness and athleticism while wrestling competitively the past 12 years. As a junior, he placed seventh at 152 pounds in the Division I state tournament.

Will credits Marysville defensive line coach Mike Young for teaching him how to get past taller, heavier offensive linemen, and he credits his father, Shaun Will, for giving him the confidence to play the position.

“Mike Young has taught me everything I know about playing on the defensive line, from hip movement to using my hand-eye coordination to execute my techniques,” Erryl said. “When I’m up against taller guys, I use my speed and go at their knees because they have a hard time blocking that low.

“I get my grit from my parents and my confidence from my dad, who taught me to not be intimidated by anyone no matter how big they are.”

Will has had a knack for making game-changing plays when his team needs a boost.

During Marysville’s 27-7 victory at Hilliard Bradley on Sept. 10, Will scooped up the ball after it was snapped over the punter’s head and scored his first varsity touchdown.

Two weeks later, in a 21-14 overtime win over Hilliard Darby in a key league game, Will recovered a fumble inside the Monarchs’ 20-yard line on the final play of overtime to end the Panthers’ bid for a comeback.

But Will said the biggest highlight of his career happened during his junior season when he held his own against center Toby Wilson while helping Marysville defeat Olentangy 28-7 to win the OCC-Cardinal outright with a 5-0 league record.

Wilson, who at 6-2 and 298 pounds is a preferred walk-on as a freshman at Ohio State, is the son of Ohio State assistant coach Kevin Wilson.

“I’m used to taking on offensive linemen who are 6-4 and 300 pounds,” Will said. “Toby Wilson is probably the best center I’ve gone up against, and it was a good matchup. He stopped me on some plays, and I was able to beat him on some other plays.”

‘I love talking crap on the field’

Johnson said Will is an equally good leader on and off the field.

“Erryl’s very energetic, and he’s a vocal leader for us,” Johnson said. “If we’re flat in a practice or in a game, he’s the kid who rallies us. He knows when to turn up the intensity and when to keep it light.”

The charismatic nose guard, who is a self-described class clown, said he enjoys making his teammates laugh with a well-timed joke in practice or with some witty trash talking during games.

“I love talking crap on the field,” Will said. “I’ll say things like, ‘When are you going to get a third guy to try to block me?’ Or another time I asked a lineman: ‘When are you going to realize that I just beat you with a swim move five times in a row, and learn to stop it?’ It’s part of the fun of playing defense.”

Will, who sports a mullet haircut, isn’t afraid to tease his teammates or to laugh at himself.

While Marysville junior linebacker Colton Powers was being interviewed by a reporter after the Monarchs routed Olentangy Berlin 34-6 in a league game on Oct. 15, Will walked by with a wolfish grin on his face and said, “Don’t interview that guy, he (stinks),” drawing a chuckle from Powers and several other teammates.

“When our energy is down or when we’re in a bad mood or a funk, I try to make my teammates laugh,” Will said. “My teammates always like to make fun of my height, especially Ben who calls me ‘5-2.’ I call Ben ‘Joe Dirt’ because I think kind of looks like him with his mullet. But we’re all good friends, and our whole defensive line likes to get together to play euchre.

“I never like to have a boring time or a dull moment. I think I get that from my mom and stepdad (Michael and Amber O’Neal) because they like to keep things as fun as possible.”

Will enlisted in the Marine Corps Reserve over the summer, following in the footsteps of two of his four older sisters — Samantha Greenbaum (Marines) and Tristan Hanline (Army) — who served in the military.

But Will is hoping his football career is far from over. The Monarchs have a chance to win the OCC-Cardinal title outright in their regular-season and league finale Friday at Olentangy, and they are considered one of the favorites to challenge for regional and state championships.

Marysville is ranked No. 2 in the Division I state poll and No. 13 in SBLive’s all-classification Ohio Top 25.

“We’d love to walk out of here with championship rings on our fingers,” Will said. “I’ve already enlisted into the Marines, and my ship date is July 25, but my plan is to get a college degree, and I want to play college football. I haven’t had a lot of attention because of my size, but I want to keep proving people wrong by playing football at the next level.”