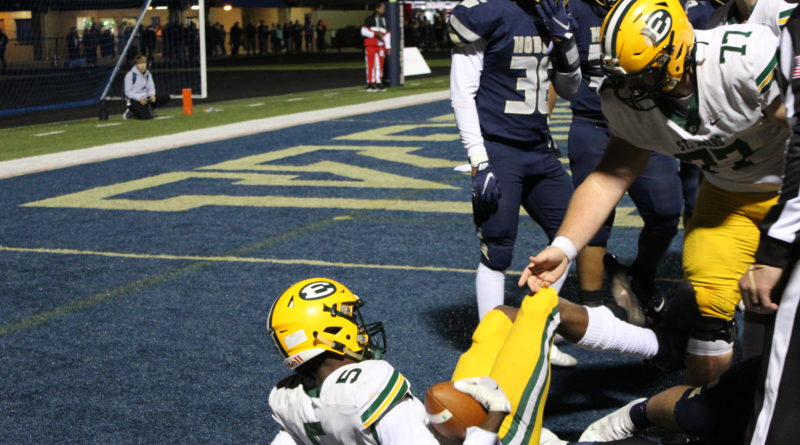 AKRON, Ohio — St. Edward beat Archbishop Hoban at its own game Friday night, dominating on the ground to march to a 28-17 win over the Knights at Dowed Field.

The Eagles (9-1) both avenged last year’s stunning 35-0 loss to the Knights (7-3) and bounced back from last week’s overtime loss to Archbishop Moeller.

“My morale, along with the team’s morale, we are feeling really good,” St. Edward quarterback Christian Ramos said. “Last week we had our first loss of the season, and this week we are coming in against a really respectable opponent (in) Hoban, and you know what happened to us against them last year. So it feels really good to get this one out.”

Coach Tom Lombardo’s St. Edward squad had not trailed in a game this season until the end of that loss last week to Moeller, and the Eagles found themselves trailing again early against Hoban.

Lombardo talked about how his team has overcome adversity, and the confidence that gives him heading into the playoffs.

“Things came too easy for us early this season,” Lombardo said. “We knew it wasn’t always going to be that easy, and we faced a tough one last week. (Tonight) we responded well to an adverse situation, which we hadn’t faced all year. That is what I’m most happy about.”

St. Edward was led by Ramos, its senior quarterback, who finished the game with 153 yards on 12-of-22 passing, with 21 net rushing yards and two touchdowns on the ground.

Ramos nearly added a passing touchdown after he flipped a pass to senior Ryan Miklich, but Miklich fumbled on the 1-yard-line. The loose ball was recovered in the end zone for a touchdown by senior receiver Rayshawn Manning Jr.

Danny Enovitch would not be left out of St. Edward’s run game, as the senior running back managed 110 rushing yards on 16 carries, including an 11-yard scamper to the end zone that put the Eagles up by two scores. He caught one of his two targets for a 20-yard gain.

Hoban opened the game with a bang, as junior quarterback Jayvian Crable threw a 37-yard touchdown on his second throw. Crable would score again in the fourth quarter, but in the intervening period he struggled against the speed of the Eagles’ defense.

Crable completed 8 of his 24 passes for 137 yards and that pair of touchdowns, which were Hoban’s only trips to the end zone.

Junior running back Lamar Sperling has served as the backbone of Hoban’s offense this year and came into Friday’s game with two straight games with four rushing touchdowns. But he was stifled by the speed and size of St. Edward’s front seven, as he rushed for only 78 yards and no scores on 18 carries.

“(Sperling is) a real great back,” Lombardo said. “Our D-line and our linebackers really took the challenge, tackled well and fit their gaps. That is what we had to do.”

Tyrrell said his offense needed to clean up some things up to be able to run the ball against a team like St. Edward.

“Obviously they are really fast — you know (linebacker Wyatt Gedeon) and (defensive end Michael Kilbane) can hold the edge really well,” he said. “We just made some mental mistakes, and we were a little behind on timing.”

Both St. Edward and Hoban now look toward the postseason and await their seeding and next opponent.

“I’m feeling really good,” Ramos said. “But that’s only going to last for tonight. (Now) we’ve got to prepare mentally and physically and just get ready for the run.”