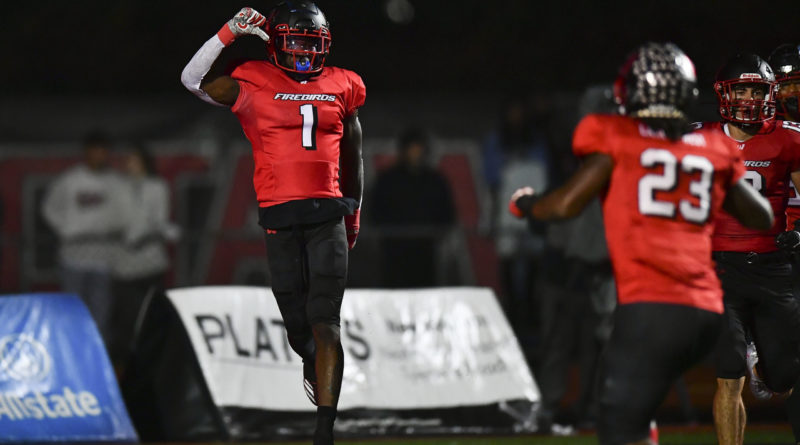 The Firebirds didn’t let the rival Lakota East Thunderhawks get anything going on offense in a 34-7 home win.

”I knew it would be a hard-nosed game,” Lakota West coach Tom Bolden said. “Offensively we started slow, but the defense played great, and usually whoever wins the turnover battle tends to win the game, and that was us tonight.”

The game was wet and slippery — perfect conditions for turnovers — and the rain picked up throughout the game.

On its first drive, Lakota West chewed up clock and got to the 4-yard line with a fourth-and-1 conversion ahead. But a false start drove the Firebirds five yards back, setting up a 26-yard field goal by Tyler Bohn to kick off the scoring.

Lakota East took the ball with 7:37 left in the first, and Taebron Bennie-Powell ran 42 yards to the Lakota West 37 to get the Thunderhawks in business.

But after a brutal hit on quarterback T.J. Kathman by Jyaire Brown, Aden Miller grabbed an interception to not only thwart the drive but bring Lakota West to East’s 40-yard line.

The second quarter was rife with three-and-outs on both sides until two minutes remained until halftime.

Kathman threw his second interception — this time to Brown, who returned it 32 yards to set up Lakota West inside the 20-yard line with 1:14 left in the half. Quarterback Mitchell Bolden then found Trent Lloyd for an 8-yard touchdown to put West up 10-0 at halftime.

It didn’t get any better for Lakota East after halftime.

After another three-and-out, Lakota West’s Malik Hartford blocked the punt, and Alex Afari returned it 30 yards for a touchdown to give the Firebirds a 17-0 lead.

Another turnover in the fourth quarter led to more points for Lakota West, as a Lakota East fumble set up a touchdown pass from Mitchell Bolden to Trent Lloyd.

Lakota West improved to 8-1 and Lakota East fell to 7-3, and both will now await their playoff opponent next week.

Brown has high expectations for his Firebirds.

“Nothing but big things — the state championship is what’s next,” said Brown, one of four Division I recruits on the Lakota West roster.