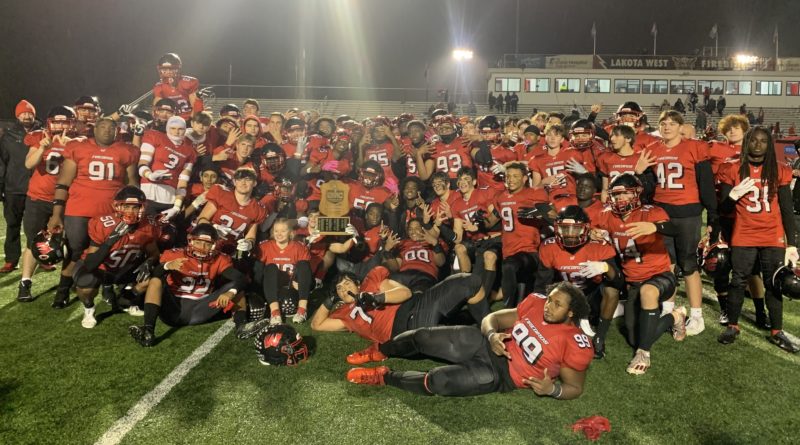 The two top-ranked teams — St. Xavier and St. Edward — took care of business in the final game of the regular season, but the two hottest teams in Division I are No. 3 and 4 — Medina and Lakota West.

Medina and Drew Allar yet again needed just a half to blow out the Bees’ opponent, while Lakota West (photo by Jordan Carter) cruised past rival Lakota East for its eighth win in a row since losing its season opener vs. St. X.

St. Xavier bounces back from its loss last week to St. Ignatius to head into the playoffs with an 8-2 record.

After a back-and-forth game early that saw Hoban take a 10-7 lead and St. Edward go up 14-10 at halftime, the Eagles took over in the second half.

Medina scored 42 in the first quarter last week, and this time it took two to put up 42, as the Bees completed their first undefeated regular season with another running-clock win.

Lakota West heads into the playoffs as the co-hottest team in Division I with Medina after beating rival Lakota East to win the GMC championship.

St. Ignatius was idle and awaits its first-round playoff opponent.

Avon made easy work of another opponent, this time winless Amherst.

Springfield bounced back from its upset loss last week to Miamisburg by dominating Northmont in all phases.

Toledo Central Catholic raced to a quick 21-0 lead and raced to an easy win over St. Francis.

Make that 22 in a row for Chardon as the Hilltoppers head into the playoffs as the clear-cut Division III favorite.

Pickerington Central battles back from an early deficit to win the game and the OCC Buckeye Division championship.

After three straight overtime games (two of them wins over St. Edward and St. Ignatius), Moeller suffers a letdown in Detroit to end its regular season.

The Monarchs finish with their first undefeated season in 21 years and win the OCC Cardinal Division championship.

Hoban hangs tough but falls short at home against St. Edward to head into the playoffs battle-tested against tough competition.

Princeton finishes 9-1 and knocks Colerain down to 5-5 despite the Cardinals outgaining the Vikings 343-196.

Benedictine took a 13-0 lead in the first quarter, but Nordonia scored the next 20 points and hung on for the home win.

New Albany finishes its 10-0 regular season with an exclamation point in a dominant win over Westerville Central.

St. Vincent-St. Mary got on the board first with a pick-six, but it was all Walsh Jesuit from there.

Piqua goes back-to-back as MVL champions with another easy win to finish out the regular season.

The Lancers clawed back from an early deficit but fell short to the Panthers, finishing the season 5-5 and hurting their chances at hosting a playoff game.

The Thunderhawks finish the regular season on a two-game losing streak and will try to regroup for the playoffs.

The Knights finish the season 10-0 and should be a top 2 seed in the playoffs, meaning they should avoid Piqua until the regional final.

Mentor finishes a rough regular season on a strong note and still has a shot at hosting an opening-round playoff game.