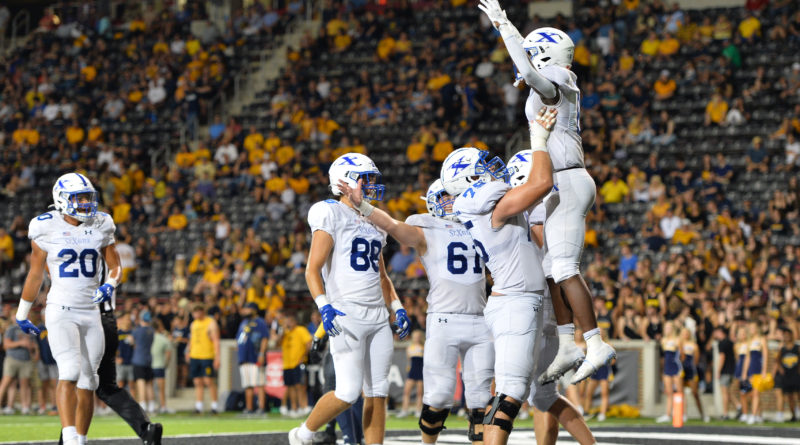 Then, after this week, it is playoff time in Ohio!

Last week: 1
For the second time in three weeks, the Bombers fall to a late fourth-quarter drive, this time at the hands of a criminally underrated St. Ignatius team. Senior quarterback Brogan McCaughey threw his first interception of the season after 191 passes, while still throwing for 218 yards and two touchdowns in a losing effort. Despite the record, the Bombers are still D-I favorites.

Last week: 2
Going into Week 9, it was crystal clear who the top two teams in the state were. Now, that crystal-clear adjective is muddy at best. Alec Weeder’s touchdown run late in the fourth took the game into overtime. Then in the first overtime, Noah Geselbracht hit Tennel Bryant in the corner of the end zone to put Archbishop Moeller up 28-21 for the program’s biggest win in recent memory.

Last week: 3
42. That’s how many points the Battling Bees put up on winless Lorain in the first quarter on Friday night. Medina scored on two pick-sixes in the first quarter, adding a third later in the game. Drew Allar was Drew Allar, with five touchdown passes before being taken out of the game midway through the second quarter. Medina won 70-7 and will end the season at Solon on Friday night.

Last week: 4
The loss at St. Xavier feels like forever ago given how dominant the Firebirds have been since. Lakota West’s defense has yet to allow more than 17 points in a game since its opening-week loss. But the biggest test of the season is coming Friday when they host cross-county rival Lakota East with the possibility of two playoff home games on the line.

Last week: 8
Let’s face the facts: Region 1 is stacked. With St. Edward, Medina and St. Ignatius, there is no tougher region to trek through in the OHSAA playoffs. The big question is: Whose side of the bracket will the Wildcats end up on? After knocking off two defending state champions in Hoban and St. Xavier, nobody wants to see the Wildcats early.

Last week: 7
This was a one-sided affair has Avon summoned the running clock with a 48-0 lead at halftime, winning 55-7. This was the Eagles’ most dominant performance to date with their regular season finale at winless Amherst on Friday.

Last week: 5
The last of the three Top 5 upsets to address in this week’s Top 25. This one ended in dramatic fashion as Miamisburg, down one late, decided to go for two to win it all. Christian Davis took a pitch and just clipped the pylon to bring home the upset win and end the Wildcats’ perfect season. Springfield ends the regular season against Northmont on Friday and could get the Thunderbolts in the first round of the OHSAA playoffs next week as well.

Last week: 6
The Fighting Irish have clinched at least a share of the Three Rivers Athletic Conference with a 34-15 win at Fremont Ross on Friday. But the upcoming playoff draw may not be friendly to TCC. With Highland holding the top seed in Region 6, it’s very likely that Avon and TCC could meet in the Round of 16, despite being the two highest-ranked D-II teams in the SBLive Top 25.

Last week: 10
Simon Monnin led the way for the Golden Bears, tallying three touchdown passes in the first half as Upper Arlington defeated Dublin Coffman 42-13, improving to 9-0 on the season. This marks the Golden Bears’ first nine-win season since they went 10-2 in 2008. Upper Arlington will host a 7-2 Hilliard Davidson squad on Friday before heading into the postseason.

Last week: 11
Twenty-one in a row for the Hilltoppers after their best offensive performance of the two-season-long streak. Granted, they were aided by waiting until the fourth quarter until getting the running clock going in their 59-13 win over Willoughby South. Chardon will get Eastlake North before heading into the playoffs for a chance at back-to-back D-III state titles.

Last week: 9
Yes, Upper Arlington, Marysville and New Albany are perfect through nine weeks, but there is a strong argument to be made that Pickerington Central is the best team in Greater Columbus. Over the past four weeks, the Tigers have outscored their opponents 187-14. They end the season with a Reynoldsburg team that is on a four-game winning streak of its own.

Last week: 14
Nobody likes free football as much as Moeller. Three weeks, three straight overtime games. And for the second win in a row, they were on the right end of the final result, upsetting then-undefeated St. Edward. The Crusaders currently hold the #1 seed in a loaded Region 4 and could clinch the top spot with a win over Detroit King (Mich.) this Friday.

Last week: 13
The best defense in Greater Columbus continues to roll with a 34-6 win over Olentangy Berlin. The Monarchs have clinched the top seed in Region 2 and will end their regular season at Olentangy with a chance at their first perfect regular season in over 20 years.

Last week: 15
Another undefeated bites the dust as Hoban ends Benedictine’s bid for a perfect season. The Knights have hit their stride at the right time. After starting 3-2 (with one of those wins over Bishop Sycamore), Hoban has won four straight over stiff competition including St. Francis (N.Y.) and St. Vincent-St. Mary. The Knights will need that momentum as they host St. Edward to end the regular season.

Last week: 17
A three-touchdown second quarter was the catalyst for the Vikings win over Mason, 37-14. Princeton was led by senior QB Mekhi Lynn who threw for 335 yards and 4 TDs, while rushing for another. The Vikings will end their regular season by hosting Colerain on Friday night.

Last week: 12
After an unexpected bye week, the Bengals ran into a revitalized Hoban team that shut them down offensively for a 28-10 win. While this ends the Bengals’ bid for a perfect season, it doesn’t change the fact that they will host two early playoff games and be given a favorable path for a deep postseason run. Benedictine ends its regular season at Nordonia, a team it could face in the later rounds of the OHSAA playoffs.

Last week: 16
It’s been four straight for the Tigers after their second shutout win of the season, this time over Wooster, 31-0. The defense did all the heavy lifting for the Tigers with two punt returns for touchdowns as well as a pick-six. This week is the oldest rivalry in the state of Ohio as the Tigers head to Canton McKinley for their traditional Week 10 contest.

Last week: 20
Brunswick put a scare into the Explorers, sending the game into overtime where Hudson would claw out a victory. Senior running back Ryan Evans was the workhorse for the Explorers, rushing for 102 yards and four touchdowns on the night. However, it was Ryan Evans with the lone touchdown in overtime to win the nail-biter. Hudson will face Stow-Munroe Falls on Friday to decide the National Division title of the Suburban League.

Last week: 21
Nothing like a nail-biting, come-from-behind victory to save an undefeated season. The Eagles were down 19-7 with five minutes left in the fourth quarter to a formidable Pickerington North team. Drive the length of the field, score, fail to get the onside kick, get the ball with under two minutes, drive the field again for the win. Simply put, the best come-from-behind win in Ohio high school football this season.

Last week: Unranked
Welcome to the SBLive Top 25, Warriors. Walsh Jesuit started 1-2 with overtime losses to Benedictine and Hoban. Back then, this game vs. Hoban was used to argue that Hoban was down. Six weeks later, it’s clear that Walsh Jesuit has greatly improved from the 1-9 team it was in 2019. The Warriors head to SVSM for their regular-season finale before returning home for the first round of the OHSAA playoffs.

Last week: 23
A huge four-touchdown second quarter secured Piqua’s bid for a perfect season as the Indians steamrolled Vandalia Butler 49-14. Braiden Strayer was the playmaker on defense for the Indians, nabbing three interceptions. Piqua finishes its regular season at Stebbins on Friday.

Last week: 19
The Lancers ended their three-game skid with a 24-0 win over Trotwood-Madison. Despite the humble record, La Salle could earn a top-four seed and two home playoff games with a win over Elder in Week 10. We have gone to lengths to brag up the Lancers’ strength of schedule. The OHSAA computers agree and could reward them with at least one home game, if not two starting in Week 11.

Last week: 18
The Thunderhawks’ seven-game win streak came to an end on Friday on senior night against Fairfield. Lakota East took a 21-14 lead into the fourth but could not hold on as Fairfield hit them with two unanswered touchdowns, taking home the upset win, 28-21. The Thunderhawks head across the county to Lakota West this Friday in their traditional Week 10 rivalry game.

Last week: 24
The Knights clinched a share of the Eastern Cincinnati Conference title with a 35-21 win over Turpin. Junior QB Will Kocher was the key on offense, throwing four touchdown passes while running for another in the Knights’ win. Kings is safe as a top 2 seed in the OHSAA playoffs, meaning it should avoid Piqua until the regional final.

Last week: 25
Back on the winning track as the Cardinals take a 21-9 win at Strongsville on Friday night. Mentor is still within striking distance of earning an opening-round home game in the OHSAA playoffs. The Cardinals will need a win over 0-9 Euclid on Friday as well as some help from Canton McKinley and Strongsville.