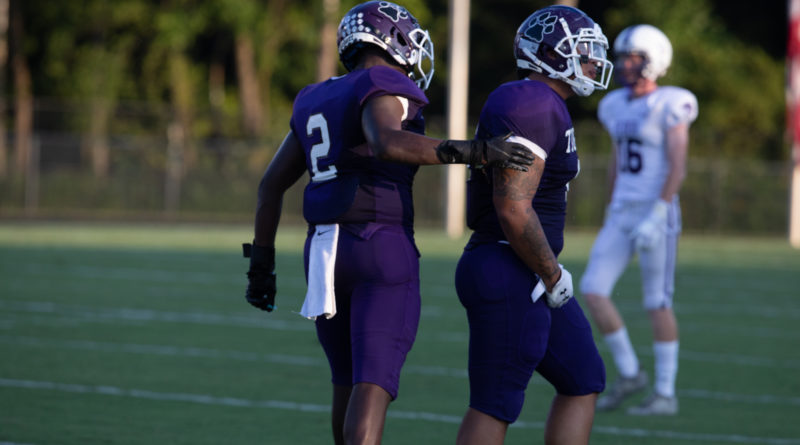 There are thousands of standout football players in Ohio, and these lists are not intended to be comprehensive! Use the comments section to discuss the other defensive linemen worthy of fans’ attention in 2021.

Pictured above are Pickerington Central’s Tyler Gillison, left, and CJ Doggette Jr. (photo by Nate Swanson), who will continue playing together in college at Cincinnati.

Cincinnati Bearcats commit C.J. Doggette Jr. is a 6-foot-2, 260-pound defensive tackle who helped lead Pickerington Central to an 11-1 season as a junior and came one win short of a state title. Four of the team’s 11 victories were shutouts, and defense has continued to be the team’s strength this season as Doggette has routinely drawn double-teams.

Ashton Duncan is a 6-foot-3, 242-pound defensive end who’s committed to play for Miami (Ohio) next season. Duncan is an excellent team leader who’s elusive and quick, and he plays with great hands and strength.

Three-star Boston College commit Clive Wilson is a 6-foot-5, 235-pound athlete. He didn’t play organized football until his sophomore year of high school, and he started playing defensive end during the wacky 2020 season. He can apply significant pressure on quarterbacks even while engaged with blockers thanks to his length, but he has the speed to get around the edge.

Kent State commit John Jackson is a 6-foot-3, 260-pound defensive tackle who also plays tight end. When Jackson makes plays, he has a knack for motivating his teammates to do the same.

Luke Montgomery is a 6-foot-5, 260-pound defensive lineman being recruited by top-tier schools such as Ohio State, Alabama, Auburn, Clemson and Cincinnati. He’s the No. 51-ranked junior in the U.S., and he can play on either side of the line but is expected to play defense in college.

Brecksville’s fate began to shift in 2019 when Kirk Doskocil emerged as a bookend tackle on both sides of the ball. The Bees went from winless to Division II playoff contenders and Suburban League champions. Doskocil remains after two years as Brecksville’s starting right tackle and defensive lineman. He’s a run stuffer on defense who also has the speed to rush the passer.

After emerging as a starting freshman on the defensive line, Padua added offensive tackle duties to Brandon Wilson’s plate in 2020. Defense is where the 6-foot-4, 265-pounder has the most experience, and he’s getting some Division I college attention, according to Padua head coach Michael Polevacik.

Five-star junior prospect Brenan Vernon is a 6-foot-5, 245-pound defensive lineman committed to Notre Dame. Though Mentor has had a disappointing season, Vernon has been consistently disruptive at defensive end, but as he grows into his frame he might end up playing defensive tackle in college.

Peter Chalhoub is a 6-foot-2, 250-pounder who can play defensive end or nose tackle. His motor never stops while chasing after the QB, and he has an excellent mix of strength, speed and tenacity.

Benny LoDuca, a 6-foot-2, 285-pound defensive tackle, is a tremendous run stuffer who can single-handedly disrupt an offense. Offensive linemen struggle to keep LoDuca out of the backfield, even when he’s being double-teamed.

Three-star prospect Drew Logan is a 6-foot-4 defensive end from Canton who’s being recruited by Akron, Ball State, Bowling Green, Buffalo and Kent State, among others. Logan’s ability to use his speed to blow by offensive linemen is his No. 1 skill.

Ball State commit Dylan Graber is a 6-foot-3, 270-pound defensive tackle who tends to rack up tackles like a linebacker. He makes a habit of stopping plays cold before they have a chance to get to the linebackers and secondary.

Tico Jones is a 6-foot-6, 240-pound defensive end who uses his length and athleticism to shed blockers, and he’s a menace to opponents’ kicking game with his ability to block punts and kicks. A two-sport star who also plays basketball, Jones plays blocking tight end on offense for Lakewood.

Keisean Johnson-Wilson is a 6-foot-3, 280-pound offensive and defensive lineman. A transfer from Buchtel as a junior, Johnson-Wilson helped pave the way at guard for an offense that rushed for 3,495 yards. Now a senior, he’s become one of the best nose tackles in his class.

At 6-foot-3 and 230 pounds, Chase Brown is an effective speed rusher and uses his quick first step to get around opposing linemen quickly. He’s been a key part of a defense that’s faced and beaten some of the best teams in Ohio this season.

Yet another dominant defensive tackle who’s on his way to the Cincinnati Bearcats, Derrick Shepard is a handful for offensive linemen at 6-foot-3, 295 pounds. The four-star senior is an excellent run stopper at nose tackle and can plug up the middle of the defense all by himself.

At 6-foot-3, 250 pounds, Sam Buerkle is committed to the Fordham Rams after also receiving offers from Miami (Ohio) and Toledo. A tenacious pass rusher, he can use his speed or power to get to the quarterback or ball carrier.