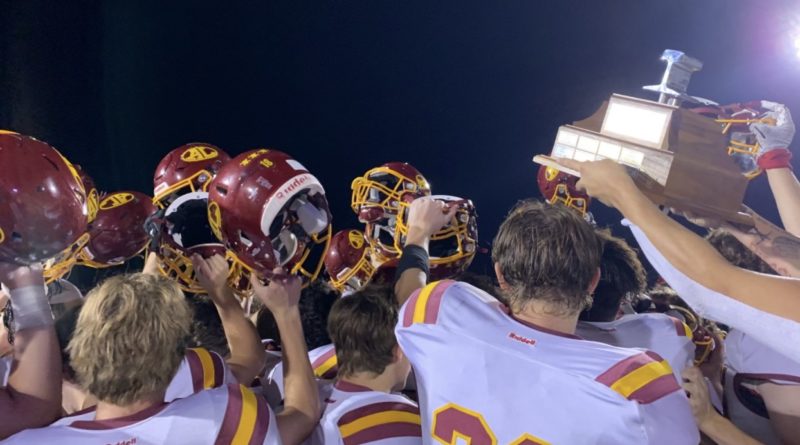 When looking at the best high school football rivalries in Ohio, many will want to point to their local clashes and wonder, how could anything be better than that?

From Celina-St. Marys in the west to Cardinal Mooney-Ursuline in the east to Ironton-Portsmouth in the south, there are so many high school football rivalries in Ohio defined by hatred, prestige and mutual respect. That’s what this list is defined by.

Heading into the final week of the regular season, we have gathered the top 20 rivalries in the state of Ohio. Several are obvious picks; several are classics; several are up-and-coming. But they all turn heads when the two teams square off on the gridiron.

There are so many Cincinnati-area teams we could have paired St. X up with — including Elder, La Salle and Archbishop Moeller. But Colerain gets the nod despite hailing from separate power conferences in southwest Ohio. Every year in Week 2, all eyes are on the annual matchup between these Cincinnati giants, as Colerain has won 10 of the last 11 GMC titles. As for St. X, the Bombers won state championships in 2016 and 2020. But what makes this rivalry great is that for five straight years, 2014 to 2018, these two schools met in the OHSAA playoffs each season, with Colerain winning three of those five meetings.

This rivalry won’t be long for lists like these, as the two schools don’t play on an annual basis anymore thanks to division realignments in the Chagrin Valley Conference. But before then, the Valley Division title was regularly decided by the annual contest. Kirtland holds a three-game winning streak over the Redskins, and the latter two came before going on to win the OHSAA championship. But before that, Cuyahoga Heights beat the Hornets twice in 2016 en route to the D-VI state championship game.

There were several options in the Columbus City League, but the history between Eastmoor and Walnut Ridge stands above the rest. Over 60 years ago, Walnut Ridge was carved straight out of Eastmoor’s geographic footprint. This resulted in students who went to school together their entire lives having to face off in athletic competition in a world before travel teams. Both the Warriors and Scots regularly find themselves at the top of the South Division of the Columbus City League.

If this was list were significantly smaller, this rivalry between two prominent Catholic schools in the Cleveland area would still make it. Combined, the two schools have 15 state championships in football. St. Ignatius won seven in an eight-year span in the late ’80s and ’90s, while all four of St. Edward’s have come since 2010. Normally played during Week 10, the game has moved to the middle of the season. St. Edward has won seven of its last 10 against St. Ignatius, with two of those meetings coming in the playoffs: a Wildcats win in 2016 and an Eagles win in 2018.

Despite Darby not opening its door until the late ’90s, there was a spark of a rivalry that hasn’t subdued since. The creation of a second high school in the Columbus suburb of Hilliard brought with it an instant rivalry for bragging rights in the city. Less than a decade after Darby opened, its parent school, Davidson, would win two state championships in four years. In 2012, Darby earned its biggest win over Davidson, a 17-3 victory, en route to a perfect 10-0 regular season.

Many from Mercer County are going to disagree with this pick, claiming that Coldwater and St. Henry is the better rivalry. However, the state stands still outside of Mercer County when the Cavs and Flyers get together. This game has decided the Midwest Athletic Conference title in each contest since 2011. Combined, they have 12 state championships in football since 2011, including both teams winning a state championship in their respective divisions in 2012, 2013 and 2014.

At the turn of the century, two football programs dominated the Northwest Ohio Athletic League. Liberty Center, after winning the state championship in 1997, won 4 straight conference titles. Then, it was the Patriots’ turn, as they won at least a share of 8 straight NWOAL championships. Despite improved competition in the NWOAL, this is still one of the most intense small school rivalries in the state with both teams advancing to the postseason every season since 2017.

In college at Ohio State, one of my roommates was a graduate of Arlington High School. And like many college basketball fans at the time who weren’t Buckeye fans, the dude hated Aaron Craft — a three-star recruit from Liberty-Benton. These two schools simply hate each other. The bitterness of the rivalry extends to the football field, where Liberty-Benton has won four of the last six Blanchard Valley Conference titles. While Arlington has had its own success in the rivalry, four second-place finishes since 2014 only makes the rivalry that much more hostile.

Unlike many rivalries where one school splits into two, the Tigers and Panthers did not play each other in North’s first year of existence. It wasn’t until five years later in 2008 when the two schools met at Crew Stadium, with Central winning the first of five straight against its younger brother. But 2012 was sweet for North, beating Central on the road in Week 6, then at home in the first round of the OHSAA playoffs.

The two eastern Ohio Catholic schools have always had an intense rivalry. They hit the statewide news circuit around the turn of the century after Ursuline won its first state championship. With Cardinal Mooney already having four state titles at the time, increased attention came to the traditional Week 10 contest. Since then, Ursuline has added three state titles to its trophy case, while Cardinal Mooney is up to eight total, half coming in each century.

While many know of St. Vincent-St. Mary primarily as a basketball powerhouse, the school has six state titles in football, including back-to-back championships in 2012 and 2013. However, Hoban has quickly become one of the most prestigious programs in Ohio, winning five of the last six D-II championships. The battle for recruits and football prowess has favored the Knights in recent years, with Hoban winning each of the last seven games, with the Fighting Irish’s last win coming in triple overtime in September 2014.

One of the oldest rivalries in Ohio, this series had lost a lot of its luster as both programs hit slumps in recent years. Playoff appearances have been rare for both programs over the past decade, with only Fremont Ross earning a postseason win over Normandy this past year when everybody made the postseason. Before that, Findlay held the most recent playoff win against Sylvania Northview in 2005. Still, the rivalry holds significant history for both programs.

The rivalry between the Tornadoes and Quakers spans three centuries, with the first contest held in 1896. It is one of only two notable rivalries in the state of Ohio that goes back to the 19th century. From Woody Hayes coaching in this rivalry before World War II to a real-life tornado destroying the Quakers’ press box, the history and stories surrounding this rivalry are endless. Recently, in 2017, New Philadelphia won a four-overtime thriller in Dover 45-38 to clinch a trip to the OHSAA playoffs.

The history of this district-split-into-two is different from most. In many cases, a new high school will be built and steal half of the students from the old high school. In the case of the Lakotas, the district built two new high schools and used the old Lakota High School for freshmen. Then in September 1998, the two schools met for the first time in front of a standing-room-only crowd at Galbreath Field. East won that inaugural game, 15-8. The two teams play Friday in the regular-season finale.

The oldest rivalry in Ohio is also commonly crowned as the best rivalry in Ohio. Dating back to 1894, the two schools are ranked first and second in the state in total wins with over 1,700 between them. Countless famous NFL players, coaches and all-Americans have taken part in this series — including Paul Brown, Earle Bruce and Josh McDaniels, just to name a few. Combined, the two schools have 30 state football championships, most coming from the AP before the playoff era.

One issue that can derail the prestige of a rivalry is when it becomes one-sided. A good example in the college ranks is how Ohio State fans claim Michigan is their rival but clear out their late-October plans to watch the Buckeyes take on Penn State. The rivalry between the Indians and Trojans has no such issue. With over 130 meetings between the two schools, Troy holds the slightest of margins, 66 wins, 65 losses and six ties. And if the playoff seeding falls right, meeting No. 138 could occur in the OHSAA playoffs.

No other rivalry in southern Ohio is quite like that between Ironton and Portsmouth. The rivalry, one of the oldest in the state, came to prominence during the Bob Lutz era with Ironton. The winningest head coach in Ohio high school football history, Lutz led the Fighting Tigers to two state championships in 1979 and 1989. In recent years, the rivalry has grown in importance as both teams have become regulars in the D-V state playoffs.

Geography is always a factor in how intense a rivalry can get. With Mount Healthy and Northwest, the two schools are only four miles apart, creating a scenario where families and friends will know plenty of kids on both teams. Despite dips in recent success, this rivalry is one that kids in Greater Cincinnati have circled on their calendar every year. Just ask the likes of NFL players David Montgomery and Joel Heath.

Dating back to their time together in the Toledo City League, conference champions have always gone through these two Catholic schools. Nowadays, that conference is the Three Rivers Athletic Conference, which has been dominated by Central Catholic since its founding in 2011. Nonetheless, the Titans have fought their way into the playoffs every year since 2017. However, getting bounced from the postseason by the Fighting Irish in 2018 and 2019 has only added more fuel to this rivalry’s fire.

Head west from Cleveland along the lake, and after a 30-minute drive, you will run into the fastest-growing rivalry in the state. Since Avon joined the Southwestern Conference in 2015, the conference’s football title has been decided by the Eagles and Shoremen nearly every season, with Avon’s inaugural SWC season being the outlier. This rivalry became heated quickly, when in 2016, Avon went a perfect 10-0 in the regular season, only to get bumped by Avon Lake in the first round of the OHSAA playoffs.