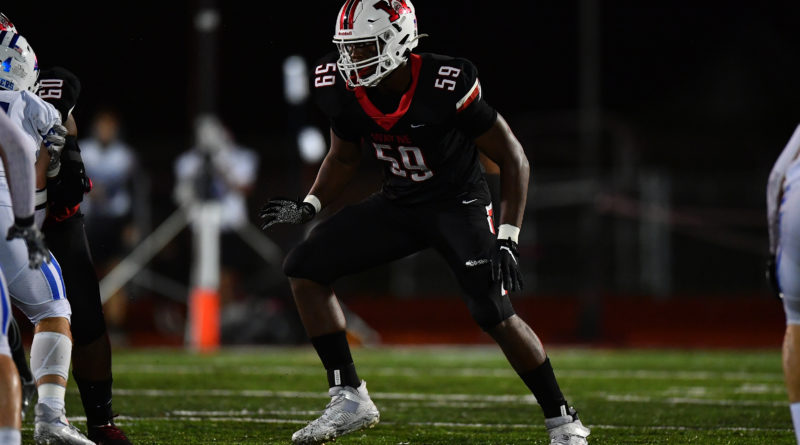 We’ll start this week off with the biggest stars in Ohio high school football: the offensive linemen.

There are thousands of standout football players in Ohio, and these lists are not intended to be comprehensive! Use the comments section to discuss the other offensive linemen worthy of fans’ attention in 2021.

Pictured above is Wayne’s Aamil Wagner (photo by Ben Jackson), who’s considering offers from a number of Division I schools.

Aamil Wagner is a lean, athletic prospect who can run, bend and move more like a tight end than an offensive tackle. The 6-foot-6, four-star prospect has started to fill in but has room to get bigger and stronger. He plays with good leverage and keeps his feet well when drive blocking. Wagner isn’t afraid to get violent when finishing his blocks, which will be especially beneficial as he adds strength at the college level. He’s considering too many Division I offers to name.

Tariq Montgomery is a 6-5, 310-pound offensive tackle for St. Vincent-St. Mary who’s being recruited to play tackle or guard at Marshall. He’s playing left tackle as a senior after playing right tackle as a junior and right guard as a sophomore. Boasting tremendous strength, Montgomery is an elite pass protector.

You’ll be hard-pressed to find a bigger high school offensive lineman than the 6-foot-6, 350-pound Tegra Tshabola. Tall, broad and long, the Ohio State commit also throws the shot put and discus in track and field. He’s a mauler in the run game who relishes finishing blocks to the ground. He projects as a potential multi-year starter in college with the physical traits to develop into an early-round NFL draft selection.

Three-star prospect Jonathan Harder is a 6-5, 280-pound offensive tackle who’s committed to the Cincinnati Bearcats. Harder’s best strength is his quick footwork that keeps him consistently in front of the defensive lineman’s face.

Blake Miller is a 6-foot-6, 315-pounder who already boasts college-ready size, and he plays with a mean streak, especially in the run game. He has the ideal size to play left or right tackle, but he can play anywhere on the line. Miller has been committed to play for Clemson for over a year and has the skills to start right away there.

Ryan Baer is a 6-6, 300-pound offensive tackle who’s committed to play for Pitt. A first-team All-Ohio honoree as a junior, Baer is currently rated as the No. 31 offensive tackle in the nation by 247Sports’ composite rankings. He had offers from more than two dozen other Division I programs, including Notre Dame, Michigan State and Virginia Tech.

Carter Smith is a 6-foot-5, 280-pound tackle who’s committed to Indiana. Smith, a composite three-star recruit, also had offers from several other Big Ten schools and was sought after by several SEC and ACC schools as well.

Maurice Hamilton is a 6-foot-4, 345-pound offensive guard committed to West Virginia. Hamilton’s enormous size, strength and nimble footwork make it hard for opponents to muscle or speed past him.

Kwabena “Kobe” Asamoah is committed to play for Rutgers. Ranking No. 30 in Ohio, the 6-foot-4, 290-pound lineman is fundamentally ready to play on Saturdays and possibly Sundays with his great strength and footwork. He also plays with good leverage that allows him to protect his QB.

Three-star Ethan Green is a 6-foot-7, 290-pound offensive tackle committed to Cincinnati. A multi-sport athlete, Green ranks No. 1 in his 285-pound weight class in Ohio with a 26-0 record as a wrestler. His talents go beyond the mat, as Green is gaining national attention for his football skills.

Three-star A.J. Salley is a 6-foot-5, 260-pound junior offensive tackle who’s already committed to Cincinnati. Salley has tremendous potential as he adds weight to his ideal offensive tackle frame, and even though it’s early to gauge, he has what it takes to play on Sundays.

Three-star Cameron Collins is a 6-foot-4, 265-pound guard being recruited by Akron, Ball State, Buffalo, Appalachian State and Central Michigan. Collins represents a small percentage of lineman in his class that are agile, a power blocker on runs and a pass protector. He uses his quickness well to stay in front of defenders.

Brian Parker II is a Duke commit who stands 6-foot-5, 265 pounds. Parker is an aggressive lineman who tends to put defenders on highlight films by driving them all the way back to the parking lot if he can. He plays until the whistle is over and his defender is planted into the ground.

Avery Henry is a 6-foot-6, 305-pound tackle being recruited by West Virginia, Iowa State, Akron, Eastern Michigan and Syracuse. Henry is a bully on the field. If he locks his eyes on you, you’re probably going down.

Mason Mennell is a 6-foot-4, 300-pound guard being recruited by Akron, Arizona State, Marshall, Toledo and Youngstown State. Mennell is an excellent pass protector who isn’t as mobile as some others on this list, but makes up in great numbers with his pass-blocking skills.

Three-star Stephen Gales is the tallest lineman on this list at 6-foot-8, 290 pounds. There’s no getting past Gales, who’s committed to play offensive tackle for Toledo, if he sees you.

Three-star Kendrix Goodman is a 6-foot-3, 310-pound guard being recruited by Ball State, Kentucky and Pittsburgh. Goodman is one of the most balanced linemen in his class, possessing a combination of agility and power.

Three-star Taran Tyo is a 6-foot-3, 275-pound lineman committed to Ball State. Tyo is aggressive and always hustles until the whistle blows. Besides his motor, agility is Tyo’s main strength as a blocker.