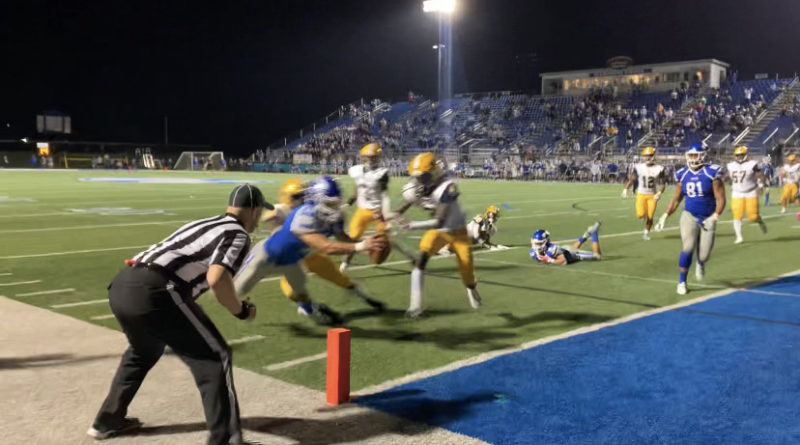 The Miamisburg fan base raced onto the field with their phone cameras rolling to celebrate the Vikings’ thrilling 22-21 win over Springfield on Friday night at Holland Field.

No one deserved the victory more than junior tight end Jackson McGohan, who not only had an interception to end Springfield’s first drive, but caught three touchdown passes from Justin Barry.

The third came with eight seconds to play and set up the game-winning two-point conversion run by Christian Davis, who dove for the pylon and set off an epic Miamisburg celebration.

“We practice it all the time,” said McGohan, who has scholarship offers from UAB and Charlotte. “Whoever we have in the playoffs, I believe we can match after beating the No. 2 team in the state.”

The Miamisburg Vikings spoiled Springfield’s run for its first undefeated regular season since the new high school opened in 2008. The Wildcats rose to No. 2 in the Division I AP poll after beating Centerville 44-7 last week.

This was only the Wildcats’ third regular-season loss in the last three seasons, and their only postseason losses in 2019 and 2020 came in the state semifinals.

“It’s a wake-up call,” Springfield coach Maurice Douglass said. “We’ve had more blown assignments in this game than we had all year. It just wasn’t as good — last week and especially this week when we had two days that we missed because we were out of school Monday and Friday. But yes, we can turn it around because the last two years we made it to Week 14 and we lost one game. Now the humbling comes later as opposed to early.”

Springfield plays at home against Northmont (1-5, 3-5) in Week 10. Centerville plays at Wayne.

Miamisburg tied the game with 18 seconds remaining in the first half on a touchdown pass from Barry to McGohan, who caught the ball as he was falling out of bounds and touched his toes in the end zone.

Barry then threw a 77-yard play-action touchdown pass to McGohan with 7:30 left in the third quarter to give Miamisburg a 14-7 lead. On that play, McGohan shed a tackle at midfield and high-stepped alone to the end zone.

Springfield then took advantage of a roughing-the-punter penalty, which extended a drive, to tie the game on a short touchdown run by Ramon Browder with 2:29 left in the third.

After a short punt by Miamisburg, Springfield scored quickly on another touchdown run by Browder with 15 seconds left in the third. The Wildcats led 21-14.

Springfield got a fourth-down stop with seven minutes to play and maintained its lead until the final seconds when Miamisburg drove for the winning score. Barry’s touchdown pass to McGohan came on third-and-goal from the 8-yard line with eight seconds remaining.

Miamisburg then set up a triple-option run to go for two. Davis launched himself toward the pylon while being hit by multiple Springfield defenders, giving Miamisburg one of its best walk-off wins in school history.

“It feels great,” Miamisburg coach Lance Schneider said. “It’s been a tough three years, and these kids believe in each other. This is going to help the seeding a bit, and give these kids confidence that they can play up against anybody in Ohio.”