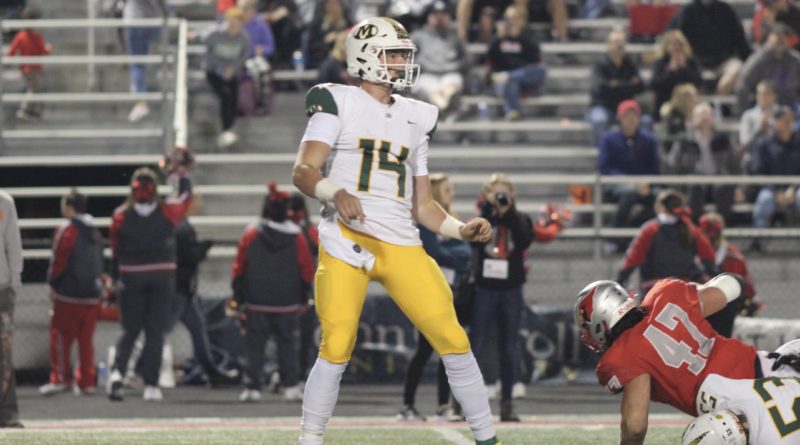 Our first list focused on the linebackers, next came the wide receivers, and we’ll finish the week by looking at the state’s top quarterbacks.

There are thousands of standout football players in Ohio, and these lists are not intended to be comprehensive! Use the comments section to discuss the other quarterbacks worthy of fans’ attention in 2021.

Pictured above is Medina’s Drew Allar (photo by Owen MacMillan), who’s committed to play for Penn State next season.

Four-star Penn State commit Drew Allar is a big, classically built quarterback prospect in the mold of the Buffalo Bills’ Josh Allen. Allar’s background of playing other positions has led to him becoming the dual threat he is today. Allar has a strong arm with good velocity on his passes, and has the ability to change arm angles to make throws without needing to set his feet. But he can also stand in the pocket and deliver the ball on time. Allar projects as a college starter, potentially an early one, and has the traits to play on Sundays.

Pro-style quarterback Luke Devins stands at 6-foot, 205 pounds, and he threw for 3,000 yards and 35 touchdown passes last year. If “Improviser” were a person, it would be Devins. He has great footwork that allows him to escape sacks and boasts a cannon of an arm to fit the ball in the smallest spaces. If you don’t sack him, be prepared to watch him find a target downfield.

6-foot-2, 190 pound Quarterback Alex Moore combines his lethal right arm and his strong legs to make big-time plays for his team. Back in 2019, Moore threw over 2,000 yards and 25 touchdowns and ran for five more scores. The 6-foot-2, 190-pound dual-threat QB is excellent at improvising when the play isn’t there. Moore came off last weekend’s loss in crutches and looks to be sidelined for a couple of weeks.

“Big” Joe Pfaff stands at 6-foot-5, 192 pounds and also stars on the baseball diamond. Pfaff is a conservative pocket passer who takes what the defense gives him. He isn’t the type of QB to make costly mistakes often. He relies on his quick, accurate throwing arm to escape pressure rather than his legs, making him a perfect old-school, pocket-style QB.

D.J. Newman is an athletic playmaker who stars in football, basketball and baseball. He racked up accolades in all three as a junior — including NWOAL baseball player of the year, first-team all-NWOAL at quarterback and first-team all-NWOAL in basketball. Through five games in his senior football season, he had 929 passing yards and 12 touchdowns as well as 598 rushing yards and nine rushing touchdowns.

Brogan McCaughey is a 6-foot-1, 185-pound quarterback with offers from schools such as Akron, Bowling Green, Kent State, Eastern Michigan and Eastern Kentucky. His ability to escape pressure and hit his targets down field is a prime reason why colleges are looking at McCaughey. Although he is generally a conservative quarterback who will check down when he escapes the pocket, he’s willing to fire deep, and his rocket arm gets the ball where it needs to go.

Brady Shannon is a three-star, 6-foot-3, 210-pound quarterback who was named first-team All-Steel Valley Conference, All-Mahoning County Team and All-District team, and he earned honorable mention for All-State. He has an elite arm, off-schedule creativity and an ability to process quickly and get the ball to his targets.

Dijon Jennings is a 5-foot-11, 175-pound dual-threat quarterback who threw for 395 yards, ran for 38 and had five total touchdowns in Reynoldsburg’s most recent game against Lancaster. The three-star prospect is fast and can escape pressure with ease. In addition to his powerful throwing arm, Jennings is elusive and fast as a runner. If he escapes in the open field, good luck trying to catch him.

A dual-threat QB that is quick on his feet, the 6-foot-1, 203-pound T.J. Kathman is among the better running QBs in his class. Kathman has the ability to make big plays tricking defenses with his ability to run out the pocket, and then he either takes off running or uses his strong arm to score deep.

Three-star quarterback Te’Sean Smoot has more than a dozen Division I offers, but the 6-foot, 170-pound signal-caller should expect more with the senior season he’s having. Smoot has a playing style that resembles Lamar Jackson, with great playmaking skills to extend the play and find receivers down field or take it himself to the end zone, and he isn’t afraid to initiate contact as a runner.

Three-star Bowling Green commit Owen Bainbridge stands at a whopping 6-foot-5 and 195 pounds. Bainbridge is a great pocket passer who can extend the play and find targets down field when he has to. He’s a great field general who can move the ball consistently down field with minimal mistakes.

Raymell Hester is a mobile quarterback with a strong arm. The 6-foot, 170-pounder understands how he can affect the game by running but routinely showcases his accuracy as a thrower. A weapon who can beat you through air or land, Hester is a hidden gem among the class of 2022.

Two-star prospect Amare Jenkins is a 6-foot-3, 180-pounder who’s thrown for 1,663 yards and 21 touchdowns this season. Jenkins is being recruited by schools such as Dayton, Ball State, Kentucky, LSU and Akron. This quarterback has a cannon for an arm and excels on play action. Once he rolls out, he has the skills to either take off running or find a target downfield.

Jacob Winters is a 6-2, 215-pound athlete who holds an offer from Akron. Winters defies the typical quarterback prototype with his frame and versatile abilities. He’s effective on offense and defense, and as a quarterback he’s most dangerous as a runner.

Three-star Marshall commit Chase Harrison is a 6-2, 180-pound pro-style quarterback who has been on major-college radar since eighth grade. He threw for 1,723 yards and 18 touchdowns last season for Centerville and has already broken Ryan Hawk’s school record for career passing yards. On film, Harrison shows big-time arm strength to go along with poise, precision and accuracy. For a player his age, he demonstrates an advanced feel for the game and could find his way onto the field early in his college career.

The tallest QB on this list, Noah Geselbracht is a 6-foot-6, 203-pounder who threw for 426 yards and six touchdowns in a game against Elder this season. One of the dark horses of his class, Geselbracht’s ability to throw the deep ball with great accuracy keeps defenses honest.

Quarterback Terrence S. Robinson II led Hawken last season with 793 yards and six touchdowns with a 57 percent completion rate, and he set the school record for competitions in a game, connecting on 26 against Berkshire. He also completed at least 62 percent of his passes in three of Hawken’s four games. The lefty is an efficient dual-threat quarterback.

Arm talent is the 6-foot-4, 215-pound Sam Feldman No. 1 strength. He’s big and shows excellent presence in the pocket. Despite his size, when Feldman gets out of the pocket, he can make creative plays on the run.

Blake Lichtenberg is a 6-1, 185-pound quarterback from Toledo. The athletic dual threat improved over last season where he was stationed in the pocket most of the time. Now adding a versatile, mobile presence to his playing style has made the junior an even more dangerous threat to opposing defenses.