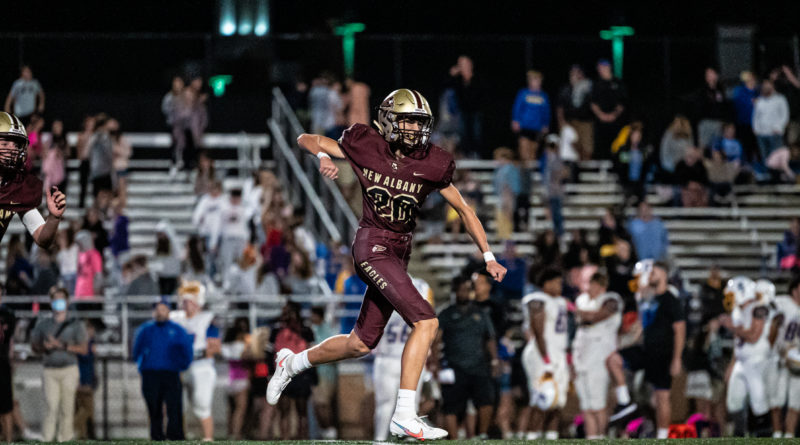 A couple of big upsets and a few wild finishes reigned Friday on a rainy night throughout most of Ohio.

Miamisburg knocked off No. 5 Springfield, Fairfield took out No. 18 Lakota East, and New Albany (photo by Gabe Haferman) pulled off a thrilling comeback win at Pickerington North.

St. Xavier’s last-second heave was intercepted just short of the goal line, giving the Bombers their second loss of the season.

St. Edward went toe-to-toe all day with Archbishop Moeller, but the Crusaders prevailed in overtime to give the Eagles their first loss of the season.

In a season full of blowouts for the undefeated Bees, this week’s was the biggest yet over winless Lorain.

After a defensive first half that left Lakota West with a 7-0 lead, the Firebirds kept the pressure on the Cardinals in the second half.

A Jackson McGohan touchdown and then a two-point conversion lifted Miamisburg to the upset win of the night over previously unbeaten Springfield.

Fremont Ross hung in there for a while Friday night against Central Catholic, but the Fighting Irish remain unbeaten in the TRAC with their 24th straight conference win.

Avon’s offense entered the game averaging 47.3 points, so the Eagles raised it ever so slightly with an easy win over Midview.

After four close losses to tough teams, St. Ignatius broke through with a big win Saturday over No. 1 St. Xavier to improve to 5-4.

Pickerington Central’s defense continued to dominate, giving up just one touchdown in the fourth quarter.

Upper Arlington scored four touchdowns in the second quarter and the rout was on.

Chardon gave up points for the first time since Sept. 17, but the Hilltoppers still forced a running clock against now-two-loss Willoughby South.

Benedictine couldn’t slow down the Knights’ running game or get its offense going in Akron.

The undefeated Monarchs treated the crowd to a fine home finale as their defense and running game were too much for Olentangy Berlin in clinching the OCC championship.

After scoring a touchdown in overtime, Mitch McNulty’s interception sealed the win for Archbishop Moeller.

Massillon Washington raced to a 31-0 lead at halftime and then put it in cruise control once the running clock was enacted.

Mekhi Lynn threw for over 300 yards and four touchdowns as Princeton made easy work of Mason.

The Thunderhawks had two first-half pick-sixes but fell apart late, suffering the upset loss thanks to two late Fairfield scores.

In the wildest game of the night Explorers broke up a pass in the end zone on the game’s final play to win a wet, back-and-forth game over Brunswick.

Brock Kidwell had a touchdown pass and a touchdown run in less than two minutes to give New Albany a comeback win after falling behind 19-7.

Highland’s defense bottled up Aurora on Saturday in a game that had been postponed from Friday because of inclement weather.

The Knights withstood Keenan Alcalde and Turpin to improve to 9-0 and clinch at least a share of the ECC crown.

Mentor finally got back into the win column, with the Cardinals’ defense leading the way.