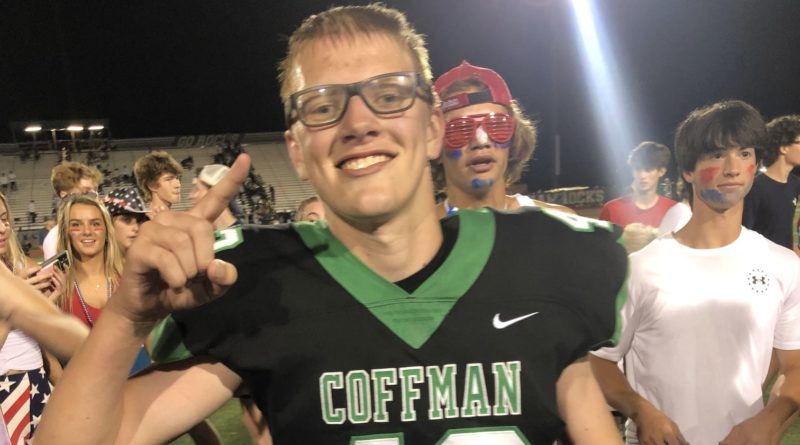 By Aaron Blankenship | Photos courtesy of the Vick family

COLUMBUS, Ohio — Drew Vick has played an inconspicuous yet vital role for the Dublin Coffman football team this season, blocking on the edge of the offensive line when the Shamrocks kick field goals and extra points.

But he’s been one of the team’s — and the community’s — most valuable players.

The senior tight end has inspired his teammates and coaches by overcoming a cancer diagnosis and the effects of ongoing chemotherapy treatments to help lead Coffman as a team captain.

“Drew is one of our best leaders and a huge part of our team,” said Coffman coach Geron Stokes, whose squad has struggled through a 3-5 season. “Drew is an incredible kid, and he’s as tough as they come.

“Drew’s had to deal with a lot of physical setbacks, but he still shows up for everything and works as hard as anyone on our team. What’s great about sports is getting the chance to be around quality people like Drew. He teaches all of us important life lessons through his commitment to the team, every day.”

Even though Vick has been limited to playing special teams this season, after making an impact as an outside linebacker in past seasons, he was unanimously voted by Coffman’s coaches and players as one of the Shamrocks’ three Alpha captains.

“Drew became our first Alpha captain because he has the respect of everyone for doing everything the right way on and off the field,” Coffman senior free safety Keegan Collins said. “Drew’s always been a great player, and even though he hasn’t been able to do some of the things he used to do this season, everyone can see what a fighter he is, by watching how hard he works in practice and how hard he plays.”

Vick said he is grateful to play football once again, after experiencing what has been by far the most challenging of his 17 years. He is being treated for B-cell lymphoblastic lymphoma, a cancer of immature lymphocytes — cells of the immune system — called lymphoblasts.

“I feel so blessed to be a part of this team and to have the opportunity to be back on the field on Friday nights,” Vick said. “I feel fortunate every time I run out onto the field after everything I’ve been through.”

Vick began playing football in first grade, and his only major injury on the field was breaking his right thumb as an eighth-grader at Karrer Middle School.

Instead of playing it safe, Vick had his hand wrapped in a protective club cast and continued to play on the defensive line. At the conclusion of his eighth-grade year, Vick received the Archie Griffin Award in honor of his leadership, sportsmanship and work ethic.

“I’m not the biggest or most talented guy on my team, so I try to be one of the hardest-working players,” Vick said. “I do have some speed, and I love to hit people. I’ve always loved playing defense because you’re able to put someone on the ground every play.”

The soreness in Vick’s right abdomen continued to increase throughout Coffman’s undefeated regular season, and it became nearly unbearable after the Shamrocks crushed Beavercreek 56-7 in the first round of the Division I playoffs.

Two days after that victory, Vick and his mother, Amy, went to the hospital, suspecting that he might need his appendix removed.

But an ultrasound revealed that a 14-centimeter-long mass had grown between Vick’s right kidney and liver and was wrapped over an adrenal gland.

“We thought Drew had just pulled a muscle in his side at first,” Amy Vick said. “Then we took him in for his appendix, and that’s when they found the large mass in his abdomen. It really became a nightmare when the biopsy revealed that it was malignant and they moved him to the oncology floor. It was terrifying and hard for any of us to accept that anything was wrong with our 16-year-old son because he had always been perfectly healthy.”

When word spread that Vick had been diagnosed with cancer, the Dublin community rallied together to support him and his family.

While Vick was in the hospital, his teammates all wrote letters to him and placed stickers with his uniform number (43) on the back of their helmets.

Defensive lineman Hammond Russell, a 2021 Coffman graduate and West Virginia recruit, also wore Drew’s No. 43 jersey during the Shamrocks’ 45-35 victory over Springboro in the second round of last year’s playoffs.

While Vick was in the hospital, he received phone calls of encouragement from Coffman graduate and former NFL quarterback Brady Quinn, and former Major League Baseball star Nick Swisher.

Cleveland Indians pitcher Zach Plesac sent him a pair of signed cleats, a letter and tickets to an Indians game.

“I will be forever grateful for all of the support I got from my family, teammates and friends,” Drew said. “Those letters and words of encouragement that came from everybody mean the world to me.”

A GoFundMe campaign raised thousands of dollars to help pay Vick’s medical bills. And after Coffman lost to Olentangy Liberty 18-15 in the third round of the playoffs last year to finish 8-1 overall, Liberty’s principal, Mike Starner, helped raise more than $2,000 to buy Vick a professional-grade recumbent bike, so he could work on building back his leg strength at home.

“The support we’ve had from the community and beyond has been amazing,” said Drew’s father, Mike Vick. “We’re all so thankful for everything everyone has done for us.”

Despite all of that support, it was a long, painful road back to the football field for Vick.

Daily chemotherapy treatments have taken a toll, giving him such side effects as extreme fatigue, nausea, mouth sores, hair loss and loss of appetite. Vick has been more prone to infections, and he’s had to undergo multiple blood transfusions.

The 6-foot-2, 165-pound athlete has developed significant neuropathy in his legs, causing him pain in his right hip and knees, and weakening his ankles. Vick now wears ankle braces because he is more likely to twist them.

Vick also has had severe allergic reactions to his medications, once causing him to be rushed to the intensive care unit after he broke out in hives and had trouble breathing.

“We’ve had good days and bad days, but there’s always that cloud of fear and worry that something could go wrong,” Amy said. “We’ll be relieved when we can rid him of cancer in the long term.”

Although the cancer was removed through intense chemotherapy last November, he will continue to receive chemotherapy treatments through the end of 2022.

‘One of the best nights of my life’

But Vick returned to the sidelines to watch Coffman defeat Springboro just a few hours after he was released from the hospital.

“My guys have always been there for me, so I didn’t want to let them down,” Drew said. “The Springboro game was electric. Being back with my team was one of the best nights of my life.”

Vick continued to attend every team function during the offseason, and he worked relentlessly to get his body back into shape between treatments.

“I was so far behind the other guys in my physical conditioning, but I put my head down and kept pushing myself,” Drew said. “I had to learn how to run and lift to regain my strength, but I still have my football I.Q. and instincts.”

After Coffman lost its first three games this season, Vick was cleared to play again, and the Shamrocks have gone 3-2 since his return to the field.

“As I ran onto the field for the first time, everything slowed down and it felt kind of surreal,” Vick said. “But once that play was over, I knew I would be fine, and beating our rival was the best feeling in the world.”

When Vick jogged onto the field for the first time in over a year, Coffman’s student section exploded into a wild applause, and many of Drew’s family members and friends had tears in their eyes.

Collins said it isn’t a coincidence that the Shamrocks were able to rally from a deficit six times that night before defeating the Celtics in overtime.

“Everyone knows what a fighter Drew is, and he’s a big reason our team has so much fight in us,” Collins said. “Drew always motivates his teammates and inspires our team to get the best out of ourselves.”

Vick is savoring his final high school football season, and he is considering playing baseball in the spring before heading off to a yet-to-be-determined college.

“All of the hard work and sacrifice has been worth it, to get to be back on the field again,” Drew said. “I’m considering working as a motivational speaker or working in the medical field with cancer patients, because I’ve been so blessed with support, and I want to help other people.

“My message to anyone out there who is struggling is that things are going to be OK. Just keep giving it your all and maintain a positive mindset, and you will live a good life.”