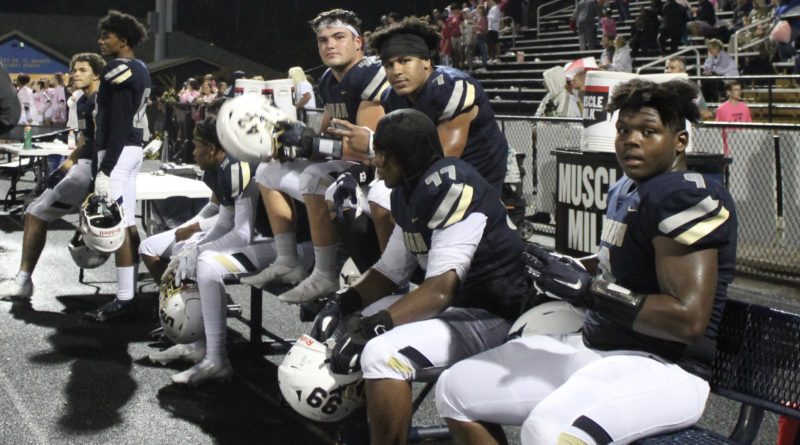 Story and photos by Owen MacMillan

Hoban would force two three-and-outs, the second punctuated by a blocked punt recovered on Benedictine’s 9-yard line, and rattle off a pair of touchdowns to win 28-10.

Hoban (7-2) is now on a four-game win streak after its six-point loss to St. Ignatius, while Benedictine (6-1) will have to have a bounce-back of its own as the postseason approaches.

Hoban coach Tim Tyrrell is not satisfied yet though, and he told his Knights they have not yet reached the peak of their ability.

“I don’t think we are good yet. We’ve got to eliminate some mistakes just to get to good,” Tyrrell said. “It’s just one of those things where we have a lot of room for improvement. But when (mistakes) happen and you still beat an undefeated team 28-10, I told the kids they should be excited.”

Something the Knights can be excited about is the performance of junior running back Lamar Sperling, who notched his second straight game with four rushing touchdowns, providing all of Hoban’s scores.

Sperling scored the opening touchdown of the game on a 22-yard carry and scored on Hoban’s first two snaps of the second half on carries of 34 and 9 yards.

“(Sperling) is always fighting for that extra yard,” Tyrrell said. “Even when he’s falling, he’s falling forward. To be honest with you, that’s something you don’t coach. That is just something you’re born with, so my hat goes off to his parents.”

Sperling finished with 151 yards on 20 attempts and added 13 yards on one reception to go along with his four touchdowns.

“I just come out here to work,” Sperling said. “It’s just another game. I come out here with the mindset of winning, working and playing hard.”

Sperling and Tyrrell pointed to the growth of the offensive line as a source of success for the Knights’ rushing attack.

“(The offensive line is) getting better every week, and they’ve gotten a lot better from Week 1,” Tyrrell said. “They’re starting to fit in and know each other really well.”

The third quarter — which decided the game — was not only defined by Sperling’s running, as the Hoban defense stifled a potent Benedictine offense, holding the Bengals to their lowest scoring total of the season by two scores.

“They do a lot of formational things; they do a lot with their skill guys,” Tyrrell said. “So, it’s hard to (stop) that. You just try not to give up the big play. They got a big play towards the end, but our kids were hustling and they made the tackle.”

That big play was a 41-yard bomb from senior quarterback Ceejay Yarboro to senior Terrell Grier, one of Benedictine’s two long pass plays of the night. The other was a 59-yarder from Yarboro to Marvin Conkle.

Those two big plays provided the bulk of the Bengals offense, as Yarboro finished 9-for-21 for 163 yards and a lost fumble.

On Benedictine’s lone touchdown of the evening, the Bengals did not break the trend of rushing scores, as junior Duane Jackson scampered 7 yards into the end zone in the second quarter. Jackson finished with 62 yards on 15 carries.

That touchdown would be the final time Benedictine got on the scoreboard, as the Hoban defense came out of the half with renewed energy.

“The defensive coaches did an unbelievable job at halftime,” Tyrrell said. “Coach Renzi Parnell and his defensive staff did a great job of doing some adjusting and putting some more heat in (for) that second half. We got them in second and third and really long.”

After the Knights went up to start the half, junior quarterback Jayvian Crable controlled the game and allowed Hoban to ride its 18-point lead to the end of the game.

“(Crable) played the situations today really, really well, and that’s huge as a quarterback going into the playoffs,” Tyrrell said.

Even the heavy rain in the second half did not inhibit Crable’s ability to protect the ball and manage the game. He finished with 99 yards on 8-of-15 passing, and tacked on 24 yards on the ground, including a 19-yard scramble for a crucial first down.

“We have a lot more potential than we put out on the field,” Crable said. “(But) I feel like today was one of our better games by far. We played really good on the offensive side and the defensive side, and we haven’t done that in a long time. (Coach) is right though, we haven’t played the best football we will play.”

Hoban finishes its regular season next week against another undefeated team, St. Edward (8-0).

Benedictine will try to start a new winning streak to enter the playoffs as the Bengals stay on the road to face Nordonia (7-2).