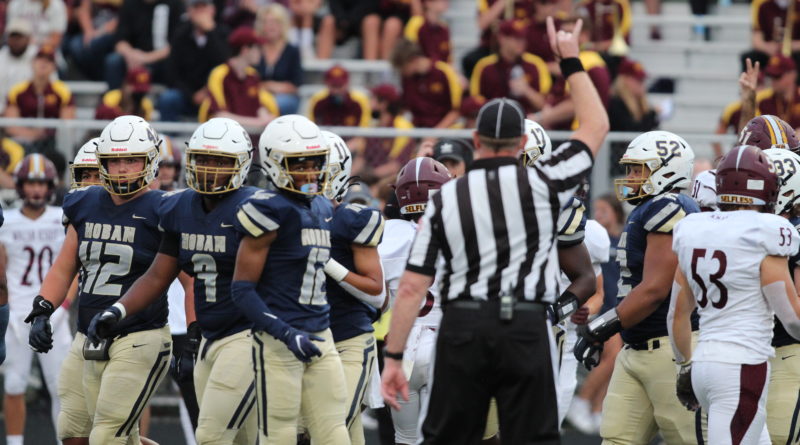 Two Cincinnati football powers are traveling to the Cleveland area for 4 p.m. Saturday games, but the game of the week is happening Friday night in Akron.

Unbeaten Benedictine plays at surging Archbishop Hoban (photo by Owen MacMillan) on Friday night in a game that should establish the Division II favorite heading into the playoffs.

Scattered thunderstorms are in the forecast for most of Ohio on Friday night.

(All games are at 7 p.m. Friday unless otherwise noted.)

Chardon has been throttling every team in its path and hasn’t given up a point in 14 straight quarters. Kenston looked like a worthy opponent Sept. 24, but the Hilltoppers won 49-0. Next up in trying to bring Chardon back down to earth is Willoughby South, which suffered its first loss of the season last week to that same Kenston team, 3-0.

Springfield has looked unstoppable of late, as its offense is starting to click on all cylinders to pair with its dominant defense. The Wildcats can clinch at least a share of the Greater Western Ohio Conference title with a win at Miamisburg, which has had an up-and-down season but is coming off a 35-0 win at Beavercreek. Expect a lively celebration in the rain if the Vikings can pull off the upset.

Brunswick ran into the Medina buzz saw last Friday and looks to get back on the upset beam at Hudson, which bounced back from its first loss of the season with a 31-0 shutout of North Royalton. Containing Brunswick dual-threat quarterback Ethan Fritz will be the key for the Explorers, which will try to control the clock with running backs Aiden Lal and Ryan Evans.

Colerain is coming off an impressive win at Hamilton, and the Cardinals’ three losses are to La Salle, St. Xavier and Lakota East, so Lakota West can’t afford to look past them and on to its rivalry game next week against the Thunderhawks. Lakota West had its game last week canceled over COVID concerns in the Middletown program, but before that the Firebirds had scored six straight blowout wins since its season-opening loss to St. Xavier.

Kings made its debut this week in SBLive’s Ohio Top 25, and the Knights will try to stay there with a win over Turpin and its tough running game, led by 6-foot-2 workhorse Keenan Alcalde. Kings had close wins over Winton Woods and Anderson but has otherwise blown out its competition. Turpin will be the Knights’ biggest test this season.

Olentangy Berlin has put together a nice season with a number of close wins, including last week’s 22-21 triumph over Dublin Jerome. Its only loss this season was at Olentangy Liberty on Sept. 10. Marysville has had one close call this season — a 21-14 overtime win over Hilliard Darby — and has otherwise cruised behind its stout defense and Powers trio.

New Albany has racked up blowout wins amid an easy schedule, but the Eagles’ 31-3 win two weeks ago over Gahanna Lincoln showed they could still control the game against a solid opponent. An even bigger test comes Friday at Pickerington North, which has a win over Pickerington Central on its resume, and the Panthers’ only loss is to Marysville. Whoever wins this game is all but guaranteed a top-four spot in Region 3 in the playoffs.

The Crusaders pulled off the play of the week last Saturday, beating St. Ignatius 29-28 in overtime after wide receiver Tennel Bryant hit quarterback Noah Geselbracht in the end zone for the winning two-point conversion. St. Edward is coming off a 38-7 win over Football North, a club team from Canada.

St. Xavier got back on track last week, following its shocking loss to previously winless Trinity (Kentucky) by beating La Salle 49-14. Other than that one-point loss to Trinity, St. X has won all of its games by double digits. One thing St. Ignatius has in common with Trinity is that the Wildcats have played an extraordinarily difficult schedule. St. Ignatius is coming off yet another close loss, this time a one-point overtime defeat at Archbishop Moeller. The Wildcats’ four losses have been by a combined 12 points.

With apologies to Toledo Central Catholic and Avon, the winner of this game has to be considered the favorite heading into the Division II playoffs (even if Hoban wins and then loses to St. Edward next week). And the loser has to figure it might get another shot at the winner in the playoffs. Benedictine is coming off an unfortunate bye week after lightning canceled its game against Cathedral Prep (Pennsylvania), while Hoban routed St. Vincent-St. Mary last week in the Akron holy war.