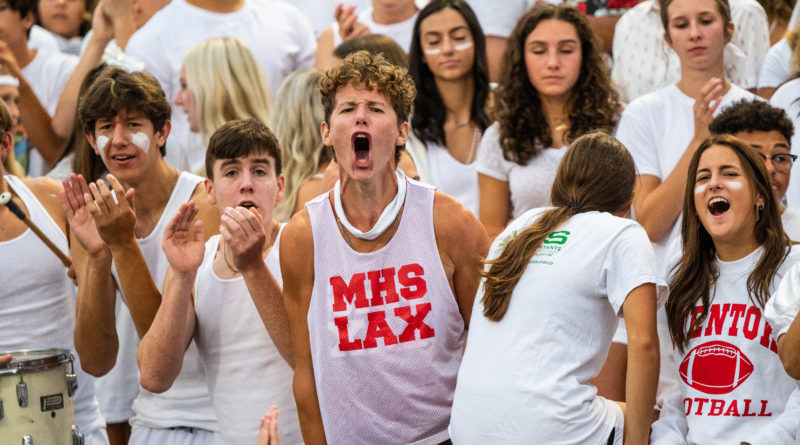 Leaves changing colors, senior nights, rivalry weeks, conference championship clinching, and jockeying for position in the upcoming playoffs — it all smells like October in Ohio!

Last week: 1
Terrell McFarlin was unstoppable in the Bombers’ 49-14 rout of La Salle. The senior wide receiver had 7 catches for 188 yards and three touchdowns as St. Xavier wrapped up its second straight GCL South championship on Friday night. The Bombers will head up to the lake for a Saturday contest at St. Ignatius.

Last week: 2
After a 90-minute delay and a slow first half, the Eagles hit the nitrous in the second half, running away from Football North (Mississauga, Ontario) 38-7. The Eagles end their season with back-to-back Top 25 opponents in Moeller and Hoban.

Last week: 3
The Bees clinched their Greater Cleveland Conference with a convincing win over Brunswick, breaking the tie at the top of the conference standings. Drew Allar threw for 349 yards and two touchdowns. In their final home game of the regular season, the Bees will host winless Lorain.

Last week: 4
Nothing to report on Lakota West as their home game against Middletown was canceled. The Firebirds will head to Colerain on Friday with both teams still in the hunt for the Greater Miami Conference title.

Last week: 5
The Wildcats could not make it four shutouts in a row after giving up a touchdown to Centerville on the opening drive. Springfield would score 44 unanswered points in a dominant performance. The Wildcats can clinch at least a share of the Greater Western Ohio Conference title with a win at Miamisburg on Friday.

Last week: 7
Like many Friday games in northern Ohio, Toledo Central Catholic’s game against Whitmer was delayed by an hour. But once it got started, Whitmer failed to get any momentum going against a defense that’s recorded three shutouts this year. With a 28-7 win, the Fighting Irish have all but locked up another TRAC championship.

Last week: 11
After a 2-2 start, the Eagles’ offense has been unstoppable, averaging 47.3 points per game. It’s worth noting that Avon has played only one team all season with a losing record, 3-5 North Ridgeville. Nobody is going to want to draw this team in the playoffs.

Last week: 6
If the playoffs began tomorrow, the Wildcats would have to go on the road to Cleveland Heights with a likely second-round date at St. Edward. Despite being .500, St. Ignatius’ four losses have been by a combined 12 points. Things don’t get any easier as they host St. Xavier on Saturday.

Last week: 9
Five different Tigers found the end zone as Pick Central dismantled Groveport-Madison 37-0 in a rematch of the 2019 regional final. Junior Dylan Bryan led the way with 74 yards on 10 carries including the first touchdown of the game. The Tigers head to Lancaster on Friday.

Last week: 8
The Golden Bears received a wake-up call from winless Olentangy Orange last Friday, as Upper Arlington held a 7-3 lead going into halftime. The Golden Bears would pull away in the second half for a 35-10 win. They get Dublin Coffman in Week 9: a game between two teams nowhere near their preseason ranking.

Last week: 10
Back on Sept. 17, the Hilltoppers surrendered a touchdown to Mayfield midway through the second quarter. Fourteen quarters of football later, Chardon still hasn’t given up a single point to their opposition. After a 48-0 win over Madison, the Hilltoppers head to Willoughby South to face the 7-1 Rebels.

Last week: 12
Nothing to report for the Bengals as their final home game of the regular season against Cathedral Prep (Erie, Pa.) was canceled. They had to Akron on Friday for a date with the preseason No. 1 team, the Hoban Knights.

Last week: 13
The defensive juggernaut that is the Monarchs had a heckuva day on the offensive side of the ball, finding the end zone in each of their six first-half possessions, taking a 42-0 lead into halftime. Marysville would come out on top 49-6. The Monarchs wrap up their home schedule Friday against 7-1 Olentangy Berlin.

Last week: 14
The Crusaders have been the kings of nail-biters in recent weeks, with back-to-back overtime games. This time, thanks to the “Philly Special,” the Crusaders came out on top 29-28 after wide receiver Tennel Bryant hit quarterback Noah Geselbracht in the end zone for the two-point conversion and the win. Following their win over St. Ignatius, Moeller will get No. 2 St. Edward in Lakewood on Saturday.

Last week: 25
After a slow 3-2 start to the season, the Knights have won three straight, including a 42-7 rout of crosstown rival St. Vincent-St. Mary. Hoban was led by junior Lamar Sperling, who ran for 217 yards and four touchdowns on the night and threw for one more. This team is finding its groove at absolutely the perfect time.

Last week: 18
The Tigers handed Canisius (Buffalo, N.Y.) its first loss of the season, 23-13. The Tigers had Canisius rattled from the beginning, scoring a safety on a botched snap in the first, then stuffing a two-point conversion in the second. Massillon kept the out-of-staters off balance all night in a win that was more comfortable than the score suggests.

Last week: 17
After trailing 13-0 early, the Vikings put it all together, spurred on by a Jaleel Engleman 96-yard kickoff return for a touchdown, opening the floodgates. Princeton would go on to beat Sycamore 42-20, improving to 7-1 on the year. The Vikings head to 3-5 Mason on Friday.

Last week: 21
The Thunderhawks make it seven in a row with a 49-14 win over winless Oak Hills. After three straight one-score games in recent weeks, this comfortable win confirms Lakota East’s place in the SBLive Top 25. The Thunderhawks host 3-4 Fairfield in their final regular-season home game on Friday.

Last week: 19
Yikes. Three straight losses for the Lancers down the stretch. Granted, those losses have been to two teams in the SBLive Top 15 and nationally ranked Indianapolis Cathedral. The .500 record says more about the Lancers’ strength of schedule and less about the talent they are putting on the field. This Friday, they head to Trotwood-Madison to face a Rams team that has won three straight after an 0-4 start.

Last week: Unranked
The Explorers earned their first win against a team with a winning record on Friday, making a statement with a 31-0 shutout at North Royalton. Ryan Evans carried the load with 15 carries for 124 yards and two touchdowns on the night. Hudson will host 5-3 Brunswick for its first home game of the regular season.

Last week: 23
The story isn’t New Albany’s 58-14 win over Westland — that is a line that everybody saw coming. The story is New Albany heading to Pickerington North on Friday to face a 7-1 Panthers team in what is the Eagles’ biggest test of their 2021 campaign. If the playoffs started today, the Eagles would be at home for the first two rounds. Whoever wins on Friday is all but guaranteed a top four spot in Region 3.

Last week: 15
After weeks of hyping up the Greenmen as the biggest competition to Chardon in D-III, Barberton comes into the picture and shuts down an offense that had been averaging 45.7 points per game. This loss to a 7-1 team doesn’t change the fact that Aurora is the biggest threat to Chardon, but it does bring up the question if anybody really is.

Last week: 20
Going into Friday night, the Indians had given up 20 points all season. Tippecanoe doubled that over the course of 48 minutes. But a resilient Piqua team put up 42 points of its own, earning its first win of fewer than 20 points this season. Piqua will host Vandalia Butler this Friday.

Last week: Unranked
The Knights make their debut in the SBLive Top 25 with a 52-20 win over Loveland. This team is best defined by its early-season wins over Winton Woods and Anderson, both within a score. Since then, the Knights have feasted on teams with a combined record of 7-28. That all changes as they host 6-2 Turpin in Week 9.

Last week: 16
Up until this week, the Cardinals have earned the benefit of the doubt given their tough-as-nails schedule, much like what is said about La Salle. However, a 24-21 loss to then-2-5 Solon brings up even more questions for a team that was ranked as high as No. 3 this season. If Mentor wants to make a run in the postseason, they will have to do so on the road because their chances of a home game are practically zero at this point.