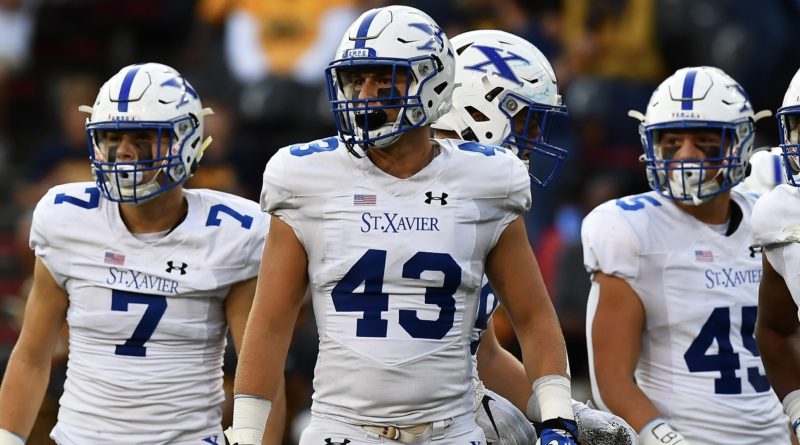 There are thousands of standout football players in Ohio, and these lists are not intended to be comprehensive! Use the comments section to discuss the other linebackers worthy of fans’ attention in 2021.

Injury cut half of Howard’s season short last year at Euclid, which finished 5-3. In four games, the 5-foot-11, 195-pound Howard had 47 tackles with 4 ½ sacks and two tackles for loss. He doubled as a fullback, and he’s working double duty at VASJ as a middle linebacker and tailback. Howard is a talented athlete who can be dominant on both sides of the ball as a speed-rushing linebacker, hard-hitting strong safety or an elusive running back. At the linebacker position, he is able to shed blocks and get into backfields at the speed of a snap. He had 15 tackles and two sacks Friday against Ursuline.

Three-star Indiana Hoosiers commit Isaiah Jones is 6-foot-2 and 215 pounds, and outside of Indiana, he was receiving substantial interest from Minnesota, Cincinnati, Duke, Wake Forest and several MAC schools. If “reinforcement” was a player, it would be this guy. He’s a true hit-sticking machine at the linebacker position with good speed to run down opposing skill players. Jones attempts to make a highlight reel out of every tackle. He is the son of former star Ohio State tight end D.J Jones, who played for the Buckeyes from 1992 to 1996.

Green, a 5-foot-11, 200-pounder, was one of Solon’s leading tacklers in 2019 as a sophomore with 76. He missed the first chunk of this season, and in four games for the Comets, he had 22 tackles. Green is your traditional hard-nosed, hit-sticking linebacker. No matter if it’s a lineman or running back, he meets them with resistance.

While Lampron made All-Ohio first team in Division IV last season at running back, he also compiled hefty defensive numbers with more than 100 tackles for a second straight season. He had 103 tackles with 12 tackles for loss, six sacks and two interceptions. As a sophomore, he had 125 tackles with 23 tackles for loss and nine sacks. The 6-foot, 215-pounder relies on his speed and physicality to make an impact on defense. Once he spots the ball carrier, he ends the play shortly thereafter.

Bebie, who stands at 6-foot-1 and 195 pounds, is a three-star Wake Forest commit who is one of the most secure tacklers in the class. Once he spots the ball carrier, he aims down low to bring them down. His pass-coverage skills as a linebacker are exceptional, with the combination of great hands and decent speed. If he intercepts the ball, he’s always a danger to take it all the back for six.

Spatny made a number of huge plays during Medina’s playoff run as a junior, and the hits have kept coming during his senior year. Spatny’s huge build — 6-foot-4, 245 pounds — is hard for opposing blockers to contain long, even when double-teamed. If the quarterback doesn’t get rid of the ball by the time Spatny clears his block, it’s almost a guaranteed sack.

Ohio State commit C.J “King” Hicks is a man playing among boys. Standing at 6-foot-4, 215 pounds, Hicks’ playing style resembles an Isaiah Simmons prototype build with better-than-average speed, good awareness of the ball and amazing tackling. Hicks also plays offense, playing the role of a downhill power back. He is a true athlete who can dominate on both sides of the ball. He’s the top-ranked senior recruit in the state regardless of position.

Anderson has moved around between defensive end and middle linebacker, providing Division IV Perry with a potent presence on defense. The 6-foot-2, 215-pound hybrid speed-rushing defensive lineman/run-stopping linebacker brings havoc to different positions on the field.

A three-star Stanford commit, Rose stands at 6-foot-2 and 205 pounds, has great awareness of the ball and plays fast. He’s a great speed rusher on blitzes, which gives him easy access to approach the quarterback quickly. Once he escapes his block, he’s already bringing down the ball carrier.

Bedingfield’s slim frame and quick footwork make him slip off offensive blocks to attack the ball carrier. And the 6-foot-2, 190-pounder is a sack machine. He’ll be playing for Toledo next season.

“The next big linebacker” from St. Edward, Freer-Brown (7) is a straight bull rusher who uses his power and big frame to push through blockers to attack the ball carrier. The 6-foot-1, 238-pounder has a knack for shoving blockers aside before bringing down ball carriers. He also plays basketball for St. Edward.

Three-star Miami (Ohio) commit Adam Trick has a huge frame (6-foot-4, 220 pounds) and plays like a traditional run-stopping linebacker. He uses his size well to clog up running lanes, which makes it difficult for big-play running backs to get started.

Sulka is one of the best overall linebackers in his class and will be playing for Youngstown State next season. The 6-foot-4, 202-pounder has all the skills you want from a linebacker — good tackling, good coverage skills, good awareness of the ball and good speed. His skills are transferable to strong safety, which might end up being his position in college.

A 6-foot-3, 230-pounder who’s committed to Miami (Ohio), Lyons is a play-making defensive jackpot. His awareness and IQ for the ball is at a higher level than most linebackers in his class. Lyons is aggressive when tackling and has a knack for forcing fumbles. Lyons is opportunistic when covering and tackling opposing players who don’t protect the ball.

Four-star junior linebacker Trevor Carter stands at 6-foot-2, 205 pounds and can also play safety. One of the most versatile defenders in the state, Carter plays with one goal: to walk away with a defender’s helmet. His tackling is superior, and his frame is small enough to speed-rush from the linebacker position. He’s being recruited by a number of Division I schools.

Dunn is having quite the season for Shaker Heights, and colleges have taken notice, as Air Force recently became the fourth Division I school to offer him. The 6-foot-3, 205-pound linebacker is Shaker Heights’ leading tackler with 60, 22 of them for loss. He also has a sack, two pass breakups, three forced fumbles and a fumble recovery in seven games. Dunn is aggressive, and is a secure tackler in open-field opportunities.

Standing 6 feet tall and weighing 225 pounds, Fleming is the most statistically accomplished linebacker this season on this list. More than halfway through the season, Fleming has recorded 11 sacks and 85 tackles. You can count on him to be involved in every play.

Three-star Cincinnati commit Jonathan Thompson is one of the most underrated players in his class at 6-foot-2 and 215 pounds. Thompson has professional footwork skills on both sides of the ball. Thompson is fast and physical, and he has an uncanny ability to track down skill players. He has missed his senior season with an ankle injury, but he’s expected to return soon and has to be mentioned as one of the best linebackers in the state.

Jackson stands at 6-foot-3, 210 pounds and is arguably one of the best in his class for having a sense for where the ball is. Jackson is rarely faked out from any play or tackle. He is explosive, physical and determined to make you pay if you come across his radar.

Five-star Ohio State commit Gabe Powers stands out from competition with a huge 6-foot-4, 230-pound frame, which makes him a force to be reckoned with. Despite his size, Powers’ speed is exceptional, and his physicality and awareness of the ball is tremendous. One of the best secure tacklers in his class, once Powers gets his hands on you, the play is over.