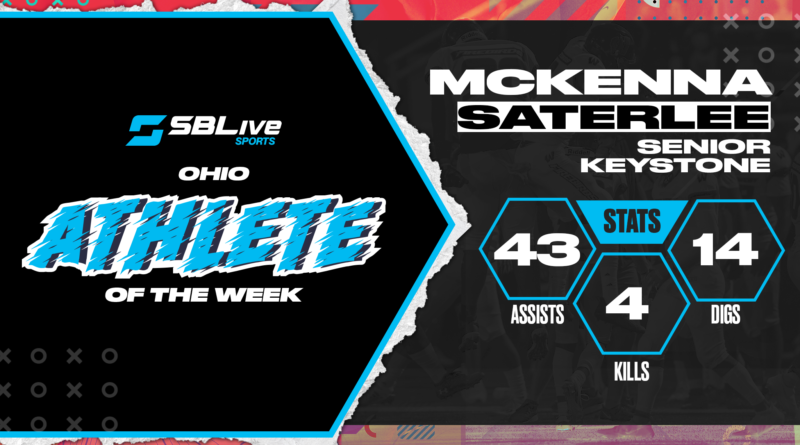 The senior collected 43 assists, 14 digs and four kills as Keystone defeated Black River in a sweep. Her performance moved her to 40th place in OHSAA history with 2,481 career assists.

Saterlee received 56.24% of the vote, beating out Marysville RB/LB Gabe Powers who finished second with 42.96%. There were over 26,000 votes tallied this week!

Aloi scored two goals in the Bears 3-1 win against Dublin Jerome. Their win set a new school record for the most wins in a season.

The senior’s 90-yard kickoff return helped set up a 5-yard touchdown in the third quarter. He also finished with six catches for 75 yards and a 13-yard touchdown.

Caffey  rushed for a career-high 175 yards and four touchdowns on 22 carries in Avon’s 49-21 win over Olmsted Falls.

Hipple took first at the 62nd annual Gilmour Academy Paul Primeau Invitational with a time of 18:29.7.

Jackson had 220 yards and three touchdowns (two rushes, one catch) to keep the Bengals undefeated.

Patrick rushed for 205 yards and two touchdowns on 20 carries.

Powers was responsible for 109 of Marysville’s 364 offensive yards, scoring two touchdowns on 2- and 18-yard runs, in addition to leading the Monarchs’ defense.

Weis recorded her 20th singles win of the season, leading the Blue Aces to a 3-2 victory over Bishop Hartley.

The senior forward had two goals and one assist as Genoa defeated Allen East High School 8-2.

Wilson went 27-for-42 for 291 yards and one touchdown. Wilson threw an 8-yard touchdown pass to wide receiver Cooper Rusk in the final minute to edge Hudson 29-28.