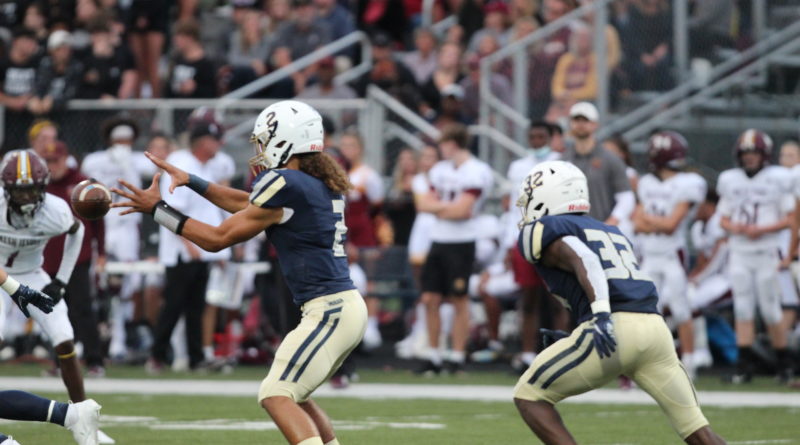 AKRON, Ohio — The Akron holy war ended without much of a fight Friday night.

Archbishop Hoban dominated from start to finish in a 42-7 win over cross-town rival St. Vincent-St. Mary at Dowed Field.

That performance gives the Knights momentum heading into to the final two weeks of the OHSAA regular season and then the playoffs.

But the road for the defending Division II state champions gets tougher, as the Knights will finish the regular season with home games against Benedictine next week and then against St. Edward on Oct. 22.

Hoban and Benedictine were both members of the North Coast League before the league was dissolved following the 2019-20 school year. Even with the league no longer in existence, the two teams played each other in last year’s shortened regular season and then met again in the Division II regional finals, both games won by Hoban.

But this Benedictine team comes in undefeated and currently holding the top seed in Region 5.

Hoban and St. Edward aren’t strangers either, as this is the second season in a row the Knights have faced the Eagles, with Hoban coming away with a 35-0 win over the Eagles in Week 2 last season. But head coach Tom Lombardo has his Eagles sitting at 8-0 and looking for their first Division I state crown since 2018.

“Any time you get a chance to play Ed’s and Ignatius, being the size school we are compared to them, it’s fun,” Tyrrell said. “It is fun for our kids to be able to say, ‘Hey listen, we are playing these schools who have quadruple the amount of boys we have.’ It’s fun for them to see where we are at on a state level.”

With just two weeks left to jockey for playoff position, Hoban is ranked third in the computer rankings in Region 5, according to JoeEitel.com.

The top four teams in each region are scheduled to host games in the first two rounds of the playoffs, provided they win in the first round. But Tyrrell isn’t worried about that right now.

“I’m not big on who is home and who is away because it is the playoffs, and you have to win no matter what,” Tyrrell said. “We just want to hit our stride at the right time.”

One major change this season is that Hoban has had to turn to a new quarterback for the first time since doing so with Shane Hamm as a true freshman in 2017. Hamm led the Knights to three state championships in his four seasons as the starting quarterback.

Before Hamm, the first of those two championship seasons came with Danny Clark at the helm, as the quarterback transferred to Hoban from Massillon for his junior and senior seasons.

The Knights are hoping to replicate that success with Jayvian Crable, who transferred to Hoban from Massillon before this season.

There is nobody who works harder than (Crable) does,” Tyrrell said. “He wants to be better, and he has been getting better every week. We are hoping we can make a little run with him like we did with Shane and Danny.”

The junior quarterback has played eight games for Hoban, and Tyrrell says Crable has been “Hobanized.” Crable credits his teammates for his being able to adapt quickly to the Hoban way.

“The guys are very welcoming here. It was easy to fit in,” Crable said. “The senior class are really good leaders. These next two games (and the playoffs) are really big games, and I believe our seniors will lead us on the right path.”

Crable is supported by a strong offensive line and run game that led to junior running back Lamar Sperling gaining 217 yards on 20 carries and four rushing touchdowns against St. Vincent-St. Mary.

“Our offensive line blocked their butts off today,” Crable said after the win. “I couldn’t ask for a better line. They did their job, and our running back performed very well.”

While having consistent play at the quarterback position has been a staple for the Hoban championships, the calling card for the Knights is their defense.

But the defense has gotten stronger as the season goes on, and the Knights have held four of its last five opponents to 16 points or less. That included giving up just three points to St. Francis (New York) last week and then just seven to St. Vincent-St. Mary on Friday.

“The defense played awesome, and they have really this whole season so far,” Tyrrell said. “We are still playing with a lot of young players, and they are playing well.”

Playing these two games against Benedictine and St. Edward at the end of the season should give the Knights a good look at where they stand heading into the playoffs, which begin in Division II on Oct. 29. But he also knows that once the regular season is over, the first 10 weeks of the season don’t matter.