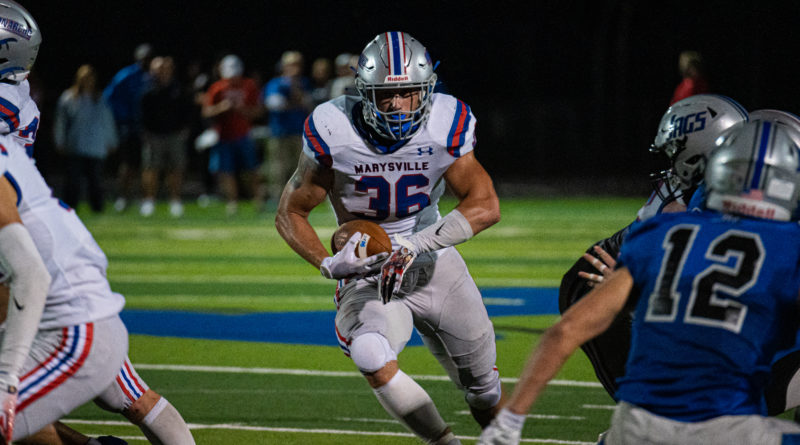 It’s nearly impossible to watch a Marysville game without being dazzled by the athleticism and physicality of a member of the Powers family.

Colton, Gabe and Tanner Powers are almost always on the field together, consistently making impact plays, regardless of whether the Monarchs are playing offense, defense or special teams.

With the Powers trio leading the way, Marysville has started 6-0 overall and 2-0 in the Ohio Capital Conference-Cardinal Division, and the Monarchs are ranked fifth in the Division I state poll and No. 13 in SBLive Ohio’s all-classification Top 25.

“The Powers boys come from a great family, and they live, breathe and sleep football,” Marysville coach Brent Johnson said. “They work really hard in the offseason, and there is a tremendous pride factor in how they play. They are special athletes, and they obviously have played a huge role in our success.”

Gabe has emerged as the most famous member of the Powers family, as the Ohio State commit is considered one of the top linebackers in the country.

The 6-foot-4, 230-pound senior was the Division I Defensive Player of the Year in the state, district and OCC-Cardinal last fall, and he has racked up 46 tackles, 10 tackles for loss, four sacks, three forced fumbles and a fumble recovery this season.

While playing halfback in Marysville’s wing-T offense, Gabe has rushed for 354 yards and three touchdowns on 51 carries, and has a team-high five receptions for 95 yards and a score. Gabe is averaging 37.6 yards as the Monarchs’ punter and has returned four punts for 31 yards.

“When you have a guy like Gabe, who is 6-4, has 4.5 speed and is really strong, he creates mismatches,” Johnson said. “He’s a special athlete who changes the line of scrimmage and dictates the way the game is played because teams game-plan for him and try to run away from him.

“Gabe doesn’t care about stats. He just wants to win. He doesn’t care if he only carries the ball three times, but when a game is on the line, he wants the ball in his hands, and so do I.”

With Gabe using his unique combination of size, speed and strength to make plays all over the field, Marysville’s defense has surrendered an average of just 5.5 points and 165 yards per game.

However, Johnson pointed out that Gabe’s younger brother, Colton, and cousin, Tanner, also buoy the success of Marysville’s physical 4-3 defense.

Colton, a junior linebacker, is leading the Monarchs in tackles for a second consecutive season, after finishing with 73 tackles last fall. The 5-foot-11, 195-pound athlete has 66 tackles, six tackles for loss and an interception this season.

As a fullback, Colton has rushed for 229 yards and four touchdowns on 42 attempts, including a 2-yard, game-winning scoring run during Marysville’s 21-14 overtime victory over Hilliard Darby on Sept. 24.

“Our opponents put so much of an emphasis on Gabe, but Colton is another physical linebacker with great instincts out there making plays all over the place,” Johnson said. “Colton is a great athlete who also has a chance to win a state title as a wrestler.”

Tanner, a senior cornerback who was second-team all-league last fall, has consistently held opponents’ top wide receivers in check the past two seasons. The 6-1, 170-pound defensive back has 21 tackles and two tackles for loss, and is averaging a team-best 21.5 yards as a punt returner.

“Tanner can lock people down at corner like very few others who play his position,” Johnson said. “Colton and Tanner haven’t received the attention that Gabe has, but some college coaches are going to get really good players when they take a chance on these guys.”

While Colton, Gabe and Tanner are making headlines for the Monarchs this season, other members of the Powers family have been contributing to the program’s success for more than 30 years.

Mike Powers, who serves as Marysville’s linebackers coach, is the father of Gabe and Colton. Mike was a hard-nosed linebacker for the Monarchs who graduated in 1992 and became an All-American linebacker at the University of Findlay. Mike helped the Oilers win NAIA Division II national championships in 1992 and 1995.

Mike and his wife, Erin, who was a standout on Findlay’s softball team, have raised three sons who became top-notch linebackers for the Monarchs.

Their oldest son, Mikey, finished second in the Monarchs’ career tackles record book, before graduating in 2019 and joining West Virginia as a preferred walk-on. Mikey is now a starting linebacker as a scholarship athlete at Ohio Dominican University.

“My whole family is a football family, including my mom, who loves it too,” Gabe said. “My dad’s the one who taught us how to play football, and he’s groomed me to play linebacker from the day I could walk.

“My brothers and I are always competing against each other and pushing each other to make each other work harder. Colt works extremely hard, doing 1,000 pushups and 1,000 sit-ups a day, and that just makes me want to do more, because it bothers me if I’m getting outworked by anybody.”

Colton said he hopes to follow in his older brothers’ footsteps by earning a college football scholarship.

“Seeing all of the work my brothers put into football, and how it’s paid off for them, motivates me to work as hard as I can every day to make myself the best I can be,” Colton said.

Mike said his sons spend so much time training that he has to plead with them to take a day off.

“They are hardworking to a fault,” Mike said. “All three of our sons are ultracompetitive, just like my wife and I, and they’re always battling to be first whether it’s football, a game or just a matter of who is getting to the dinner table first.

“Gabe’s a freak of nature who could already dunk a basketball and throw the ball 50 yards when he was in the sixth grade. He has a 38-inch vertical and he can dead-lift over 620 pounds. Colt doesn’t have Gabe’s height, but he has the best instincts at Mike linebacker of the three. Colt was doing linebacker drills when he was 4 or 5 years old, and he trains hard 365 days of the year.”

Tom Powers, a 1995 Marysville graduate who played quarterback and safety for the Monarchs, is the father of Tanner. Tom earned a scholarship to play quarterback at Findlay, where he was part of the Oilers’ 1995 national championship squad alongside his older brother.

He served as an assistant football coach at Marysville from 1999 to 2001, and he currently works as the Information Technology Director for Marysville Exempted Village School District. Tanner’s younger brother, Turner, is already aspiring to develop into an elite linebacker as a fourth-grader.

“I love playing football alongside my cousins, and our entire family has been involved in athletics as far back as I can remember, going back to when we were little kids playing whiffle ball and football in the backyard,” Tanner said.

Steve Powers, a 1996 Marysville graduate, followed in his oldest brother Mike’s footsteps by playing linebacker, and he still holds the Monarchs’ record for most career tackles. Steve, who serves as the head coach of Marysville’s freshman team, has a son, Brock, who plays linebacker as an eighth-grader.

Sam Powers, the grandfather of Mike, Steve and Tom, was a 6-5, 265-pound, two-way lineman. Sam had a tryout with the Green Bay Packers after serving in the military, but turned down coach Vince Lombardi’s offer to join the team to instead settle down and spend time with his family.

Mike had a tryout with the Dallas Cowboys and San Francisco 49ers after graduating from Findlay.

The Powers family also donated the press box to Marysville’s Impact Stadium, where Gabe was honored as the Monarchs’ homecoming king moments before playing Darby.

“Our sons understand the deep tradition our family has with football, and none of them want to break the mold,” Tom said. “Our family has embraced Marysville’s tradition as being a hard-nosed defensive team that was established by coach (Rich) Weiskircher (who led the Monarchs to a 122-80 record and five playoff appearances from 1987-2006), and we won’t let it die.”

When they aren’t involved with football, Colton, Gabe and Tanner and the rest of their family spend a lot of time together, doing such things as practicing their faith in God, fishing, hunting and vacationing.

“Our whole family is always having fun together and making memories that will last a lifetime, because we know this is a special time in our lives and a time we won’t have back,” Tanner said.

While Gabe, Tanner and Colton appear to have promising college football careers to look forward to, each of them emphasized the importance of enjoying their final season of playing high school football together.

“My whole family is Ohio State football fans, so getting a chance to play football there is definitely a dream come true,” Gabe said. “But right now, I’m just living in the moment and having fun playing high school football with all of the kids I’ve grown up with.

“We don’t think about it too much while we’re playing a game, but it’s really cool having my brother and cousin out there beside me on the field. The best part is we know we can trust each other because we’re not only teammates — we’re family.”