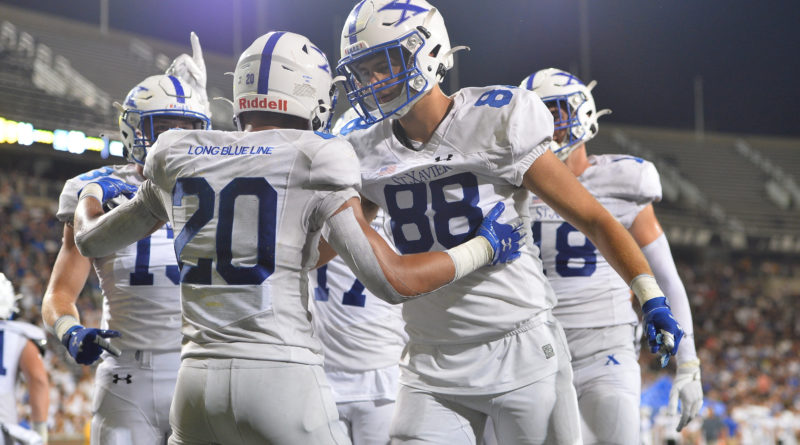 The weather was better in southwest Ohio, where St. Xavier (photo by Ben Jackson) got back on track with an easy win over La Salle, and though Springfield’s shutout streak ended, the Wildcats looked as dominant as they have all season against Centerville.

St. Xavier bounces back from its first loss of the season in convincing fashion over La Salle to win the GCL South.

A strong second half helps the Eagles improve to 8-0 with a win over the club team from Canada.

The teams honored their late former coach before a game that now will be known as the Tom Fasko Gridiron Classic.

Coronavirus quarantine protocols at Middletown forced the cancellation of the Firebirds-Middies game.

The Wildcats’ streak of three straight shutouts ended early when Centerville went up 7-0, but then Springfield got mad and scored the next 44.

St. Ignatius came back from an early 14-0 deficit to take Moeller to overtime, but a touchdown and two-point conversion dropped the Wildcats to 4-4.

Central Catholic takes control of the TRAC in a game that didn’t end until after 11 p.m. because of lightning delays.

Orange hung in there for a half, trailing 7-3, but Upper Arlington ran away with it in the second to remain undefeated.

Everyone knows how strong the Pick Central defense is, but the offense keeps piling up points too as the playoffs approach.

A game that wasn’t much of a contest anyway was called early because of lightning.

The Eagles knock off conference leader Berea-Midpark in convincing fashion to stay hot and end the Titans’ five-game winning streak.

Marysville just missed its third straight shutout, but it was another easy win for the 7-0 Monarchs.

Moeller capped a thrilling game against St. Ignatius with an amazing finish, calling a trick play to score a two-point conversion to lift its record to 6-2.

Barberton’s Cameron Macon scored both of the Magics’ touchdowns and the defense shut down previously unbeaten Aurora.

Mentor’s season to forget continues, falling to 3-5 after another upset loss.

Princeton fell behind 13-0 but then got in gear and cruised past Sycamore.

La Salle fell behind 35-14 at the half and never could get on track against St. Xavier.

Piqua finally allowed a team to score double digits, but the offense had plenty to keep the Indians undefeated.

The Thunderhawks stay undefeated in the Greater Miami Conference with Fairfield and Lakota West coming up next.

Centerville got off to a great start in the big Greater Western Ohio Conference matchup, but Springfield couldn’t be stopped once the Wildcats got going.

New Albany sprinted to a 58-0 halftime lead and then slowed to a light jog in the second half.

Kirtland makes it 47 straight wins in a game that was up and down only because of lightning delays.

Hoban had no problem winning its ninth straight in the Akron holy war heading into it huge home game next week against Benedictine.