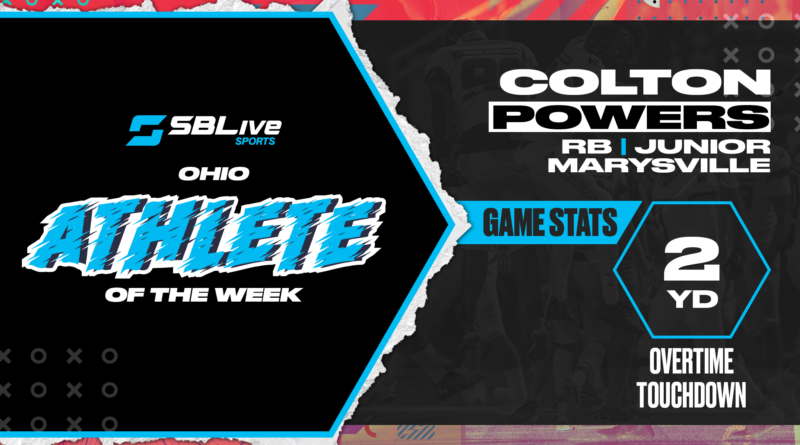 Congratulations to Marysville running back Colton Powers for being voted SBLive’s Ohio High School Athlete of the Week for Sep. 20-26!

The junior clinched the overtime win over Hilliard Darby as he pushed through the goal line from 2 yards out.

Powers received 52.73% of the vote, beating out Brunswick QB Ethan Fritz who finished second with 35.14%. Hudson golf’s Emmy Burling finished third with 11.48% and Aurora ATH Jack Cardaman finished fourth with 4.57%. There were over 28,000 votes tallied this week!

Burling shot 38 with six pars and three bogeys as she helped her team beat Solon and improve to a 10-0 record this season.

In the first quarter alone, Cardaman scored three times — an 8- and a 31-yard TD reception, plus a 49-yard punt return touchdown.

The junior pulled away in the last mile to finish as the individual champion at the 26th annual JB Firestone Invitational with a time of 17:14.8.

Fritz led his team to a huge upset at Mentor on a Hail Mary pass in the final seconds of regulation. He went 22-for-29 on passing for 261 yards and a touchdown.

With a minute remaining, Gentile’s second score of the night gave Strongsville the lead over Cleveland Heights, 27-26. He rushed for a total of 148 yards.

Grover led her team with 28 kills, 32 digs and 10 aces in Lucas’ straight-set wins over St. Peter’s and Central Christian.

Jackson had 113 yards and three touchdowns on 25 carries against Westerville South.

The junior standout scored three goals and had one assist in the Patriots 4-0 win over Bexley.

Martin rushed for 128 yards and two touchdowns in Zanesville’s 20-10 victory over Licking Valley.

The junior clinched the overtime win over Hilliard Darby as he pushed through the goal line from 2 yards out.

Ptacek excelled on both sides of the ball in Avon’s 51-13 win, making a touchdown catch and an interception.

Romanini ran the ball 14 times for 110 yards and scored twice — on a 35-yard interception return and then on a 39-yard scoring run.

Rorabaugh scored two goals and had one assist to help lead his team to a 4-0 shutout win over Highland.

Yarboro tied his career-high with four touchdown passes in Benedictine’s 38-20 win over Boardman.