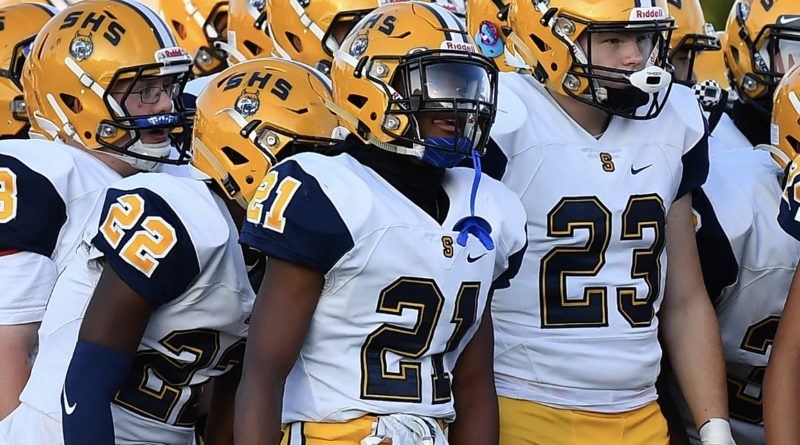 Pictured above is Springfield’s Jayvin Norman (photo by Ben Jackson), who rushed for 116 yards and a touchdown Friday night.

The sophomore rushed for a career-high 175 yards and four touchdowns on 22 carries in Avon’s 49-21 win over Olmsted Falls.

Wilson went 27-for-42 for 291 yards and a touchdown, which he threw to wide receiver Cooper Rusk in the final minute to edge Hudson 29-28.

Carr had three short-yardage touchdowns, with a 2-yard run in the first quarter followed by 3- and 1-yard runs.

The Ohio State commit was responsible for 109 of Marysville’s 364 offensive yards, including 2- and 18-yard touchdown runs.

Linberger had four touchdown runs to lead the Fighting Irish to a 49-14 victory over Ursuline.

Monnin completed 14-of-23 passes for 193 yards and three touchdowns in Upper Arlington’s 41-24 win over Olentangy Liberty.

Garnes ran for 154 yards and two touchdowns on 27 carries in New Albany’s 31-3 win over Gahanna Lincoln.

Allar went 23-for-37 for 307 yards, four touchdown passes, an interception and a touchdown run in Medina’s national-television win at Mentor.

Norman rushed for 116 yards and scored a creative touchdown in the first half against Springboro.

Brown had a perfect night, going 4-for-4 with a touchdown pass along with 111 rushing yards and two touchdowns on 15 carries.

Engleman finished with two touchdowns, scoring the first on a 15-yard run and then connecting on a 30-yard touchdown pass.

Rus rushed for 161 yards and a touchdown, including a rumbling 64-yard run. He also played solid defense.

Jackson had 220 yards and three touchdowns (two rushes, one catch) to help keep the Bengals undefeated.

The sophomore completed 7-of-12 passes for 185 yards and three touchdowns.

The senior’s 90-yard kickoff return helped set up a 5-yard touchdown by Devin Johnson in the third quarter. The senior finished with six catches for 75 yards and a 13-yard touchdown.

Crouch went 11-for-18 for 154 yards and two touchdown passes. He also showed off his speed as he rushed for 71 yards on 17 carries, including a 10-yard touchdown run.