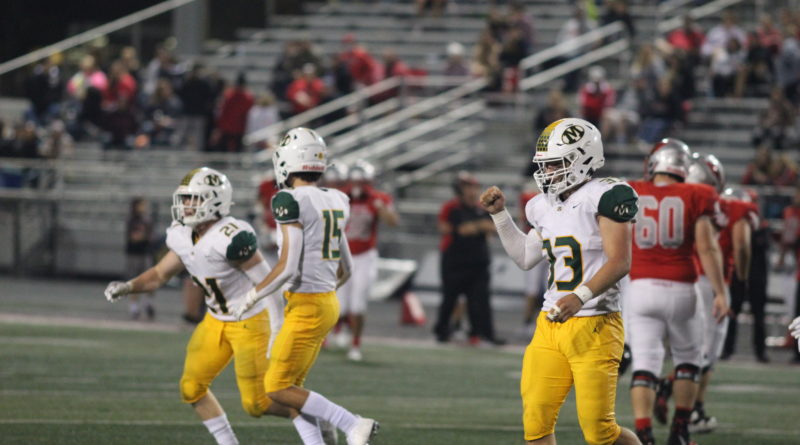 Story and photo by Owen MacMillan

MENTOR, Ohio — Medina quarterback and Penn State commit Drew Allar got his first taste of national television, but the pressure did not get to him.

He accounted for all five of Medina’s touchdowns as the Battling Bees beat the Mentor Cardinals for the first time in program history with a 35-14 victory at Jerome T. Osborne Sr. Stadium.

In a game broadcast on ESPN2, Medina (7-0, 3-0 Greater Cleveland Conference) showed Mentor (3-4, 0-2 GCC) and the rest of the nation that its high-powered offense and stout defense make an elite combination.

“We just approach it as any other game,” Allar said. “It was super cool for everyone who needs the recognition and to showcase their talent. There are so many guys on this team that could be Division I players, and I think tonight they played really well and got their names out there.”

Along with those touchdowns (four passing, one rushing) Allar went 23-for-37 for 307 yards and one interception.

“It’s a huge win for our whole team,” Allar said. “I think we finally got the monkey of not beating Mentor as a varsity program off our back.”

While Medina dominated through the air, Mentor found most of its success through its rushing attack, led by senior Evan Harper’s 134 rushing yards and two touchdowns on 23 carries.

Harper had mostly lined up at receiver this year but stepped into the running back role when starter Brendon Panhorst tore his ACL last week in a loss to Brunswick (5-2, 3-0 GCC).

“We wanted to be able to use (Harper) in the backfield to be able to get the ball in his hands as many times as possible,” Mentor coach Matt Gray said. “I thought he really stepped up, and I’m really happy with how he played tonight.”

Mentor also came into this game with a different starting quarterback, as junior Jacob Snow returned from an injury suffered against St. Edward earlier this season to relieve freshman Scotty Fox, who was injured against Brunswick.

Harper’s second rushing touchdown cut Medina’s lead to 14 in the fourth quarter, but Allar and the Bees responded with a touchdown drive to ensure that would be the closest the Cardinals came.

“At that point we couldn’t let them have a sense that they were back in the ball game,” Medina coach Larry Laird said. “Going back right back down there to score, that was huge.”

The Bees looked just as good on the other side of the ball, as the defense generated four turnovers while holding Mentor to two scores.

In the first half, two deflected Medina passes turned into interceptions. Senior defensive lineman Andrew Delac caused both of them, tipping one and causing an errant pass with a hit on Snow.

The back seven weren’t to be left out, as senior DBs Isaiah Perry and Matt Hamula each grabbed an interception.

“I thought our defense, our coaches and our players balled out and played great” Laird said. “We preach ‘FIPs’ — that’s fumbles, interceptions and penalties. Whoever is going to win that battle is going to win the game. And our defense came out and created some turnovers today.”

Medina will ride this historic win into another shot at history next week against Brunswick. If Medina wins, it will secure its first Greater Cleveland Conference championship in 48 years.

When Allar was asked if he thinks this win makes Medina the public school to beat in Ohio, he cracked a smile.

“I mean, after this … I’m not sure. But I think we’re getting on the path to get there.”