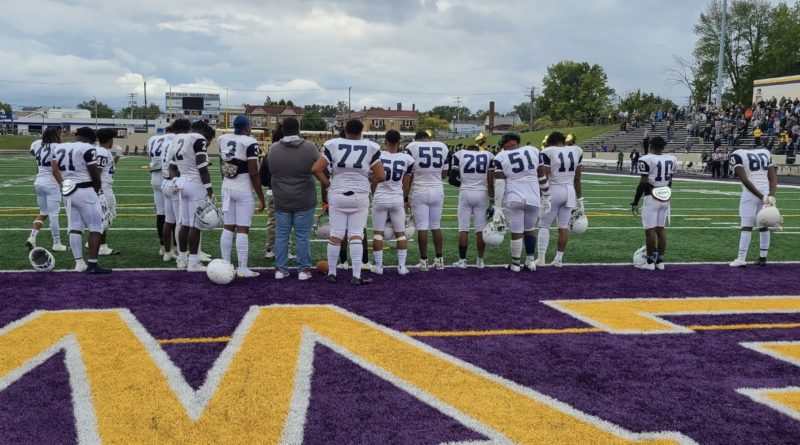 Upon first look, many might think the football programs at Bishop Sycamore and Beacon Hill are one in the same.

But take it from someone who has seen both teams in person this year — you can’t judge a book by its cover.

After covering Beacon Hill’s 58-0 loss at St. Edward on Saturday in Lakewood, Ohio, and Bishop Sycamore when the Centurions lost 38-0 at Archbishop Hoban on Aug. 19 in Akron, I can tell you one book is a page-turner, while the other isn’t worth reading past the introduction.

One program has been all over the headlines for the past six weeks, while one barely draws any results in a Google search, but the latter is much more interesting.

In fact, it was his assistant coach with whom I spoke first who told Harris I was there, and Harris sought me out.

The first question to the head coach was a simple one — just who in the world is Beacon Hill?

“We are an independent program,” Harris said. “We have some kids who are homeschooled, but a lot of our kids go to smaller private high schools who do not have football.”

It took me about 3.5 seconds to realize that Harris and the Beacons were nothing like Johnson and the Centurions, at least in the way they run their programs and the transparency with which they do so.

Unlike Bishop Sycamore, which was flying most of its “roster” in from all over the country, the Beacon Hill program comprises kids from the Richmond, Virginia, area and is in its second year of operation, though Harris has been working with kids in the community for years.

And the Beacon Hill roster was legit — with positions and numbers and even the age of the players. Not the case with Bishop Sycamore.

“I tell people all the time, don’t be afraid to speak to me,” Harris said. “This is something we have been doing with kids since they were 10 years old. We have been doing this inside the Richmond community for years. They can talk to me, and we can show all of the good work that we have actually been doing and what we are trying to do within our program.”

While Bishop Sycamore and Johnson were touting themselves as a team trying to get their players a last chance at playing college football and told anyone who would listen that the team had multiple high Division I college recruits, Harris appears genuinely in it to help his kids.

That includes being realistic about where some of his players might have a chance to land at the next level. Hence, his decision to play games against teams like Choctaw (Oklahoma), Cincinnati Elder and Lakewood St. Edward, games the Beacons lost by a combined score of 171-0.

Elder was a replacement opponent after Camden County in Georgia canceled because Beacon Hill was not sanctioned to play football in Virginia, Camden County athletic director Welton Coffey told the Brunswick News in southeast Georgia.

“I have some guys with Division II schools looking at them, and I want to get them the high school experience,” Harris said. “Us playing some of those homeschool teams last year did not give us the film. I had a lot of (colleges) tell me we needed to play better competition. That’s why I try to schedule the first three games against schools like this just to give them that experience.”

Those homeschool teams Beacon Hill plays that made coaches say they need to see the Beacons against better competition? Those would be the other smaller teams in their conference, the eight-team Greater Piedmont IAA, with Beacon Hill being the only school outside North Carolina.

So instead of trying to play the toughest schedule in America — and profiting from it the entire time — Harris and his kids play against teams comparable to them, even if it means less exposure. And Harris says they expect to be the cream of the crop in the conference this season.

“We have a very tough schedule to start the season,” Harris says. “But in conference play, we are going to pretty much kind of dominate.”

While they might both have scheduled games they had no business being in, Beacon Hill did it for three games and then will go on to play presumably more competitive games, while Bishop Sycamore tried to get a cash grab with every game by playing the best teams in America throughout their entire schedule.

The biggest issue many will have with Beacon Hill making the 7.5-hour trip to play St. Edward is that they did so with just 18 players, when St. Edward had more than 80 in uniform. While their actual roster is set at 30 players, Harris was missing players for multiple reasons, including five who were still waiting for their COVID-19 vaccines.

“With us traveling, I want everyone on the team to have the vaccine,” Harris said.

He said the size of the roster won’t be an issue for the Beacons going forward this season because the teams in their conference are all made up of rosters similar to theirs.

Another thing that stood out about the Beacons was how they maintained a level of class throughout the game against St. Edward.

The game might have been extremely lopsided, but the Beacons remained under control and continued to play clean football even when the game was clearly out of hand.

That was a stark contrast to Bishop Sycamore, which was flagged for multiple unsportsmanlike conduct penalties late in its 38-0 loss to Hoban, which included a cheap shot on Hoban quarterback Jayvian Crable that sidelined him for the remainder of the game.

To be able to make these trips early in the season, it meant Beacon Hill would need money. Harris and his church teamed up to have the players work at the local amusement park as a fundraiser to help make these games (and their season) happen.

Once the game against St. Edward was over, Harris and his players asked St Edward head coach Tom Lombardo if they could join the Eagles in their postgame prayer circle. Lombardo welcomed them with open arms, and the two teams knelt together on the field and prayed before going their separate ways.

The church is a major part of the program for Harris and Beacon Hill, not just a front put on like it was in the early years of Bishop Sycamore, when they were known as Christians of Faith Academy.

Harris said he has a strong relationship with his church and his pastor and sees the chance to work with kids as more than just the experience on the football field.

“I started coaching at first as an outreach, and we partner with my church as well,” Harris said. “This is a good draw that we can try to bring some kids to Christ. If we can get one kid to Christ, that’s a championship in my book.”