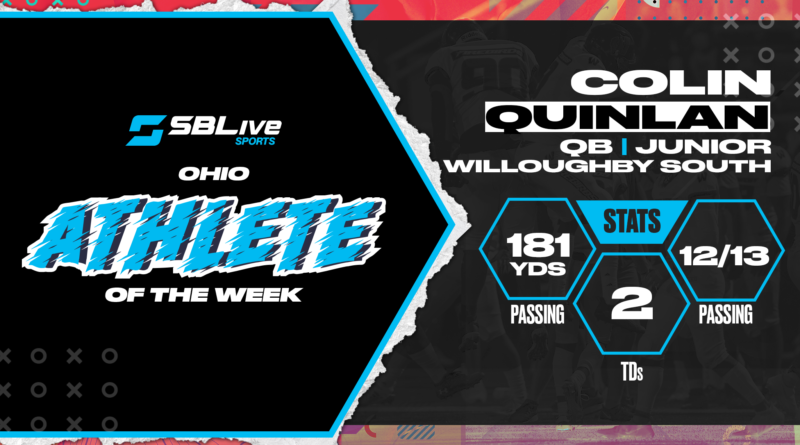 Congratulations to Willoughby South quarterback Colin Quinlan for being voted SBLive’s Ohio High School Athlete of the Week for Sep. 13-19!

The junior had a nearly perfect night, completing 12-of-13 passes for 181 yards and two touchdowns and running the ball for 59 yards in Willoughby South’s 38-7 win over North.

Quinlan ran away with this week’s honor, receiving  85.91% of the total vote.

The Penn State commit had another record-breaking game on Friday night, throwing for four touchdowns and running for three. He finished 22-for-32 with 422 passing yards.

Cope’s 7-yard run in the fourth quarter led his team to a 28-24 victory over Dupont Manual (Kentucky).

DeTillio threw to seven different receivers for 185 yards and two touchdowns, and added 77 yards on the ground in a 48-6 win over Elyria.

The senior was responsible for 75% of the Eagles’ yardage on the ground with 25 carries for 146 yards and three touchdowns.

A huge game for Fox helped snap Mentor’s two-game losing streak, as he threw for 375 passing yards and five touchdowns, including an 88-yard play.

The freshman runner ran for a time of  20:14 at the 36th annual Spartan Invitational, placing fourth individually and helping her team finish third.

Kaufman helped lead her team to a huge four-set victory over Mapleton with five kills, 14 services, 12 kills and 14 digs.

Lal had 259 yards and four touchdowns on 28 carries against Wadsworth.

Pfieffer returned after missing three weeks due to COVID-19 by going 2-0 in her singles matches. On Monday, she earned a 6-0, 6-1 victory over Ashland’s Audra McBride. On Tuesday she defeated West Holmes’ Cuylee Troyer 6-0, 6-0.

Ruffing shot a season-low of 70 to tie with New Albany’s Jackson Fry for the top individual result in the D1 Boys Section Tournament at Darby Creek. His performance helped lead Grove City to its first league title since 2005.

The senior goalie defended the net all day, helping her team secure a 2-1 overtime win over Bexley on Saturday. Stroud is No. 1 in Ohio for most saves and No. 11 in the country.

Tooms won the 2021 Gaillon Cross Country Festival with a time of 16:10:07 to earn the honor of boys individual champion.

Zygmunt had four catches for 140 yards, three touchdowns and two interceptions against Berkshire.