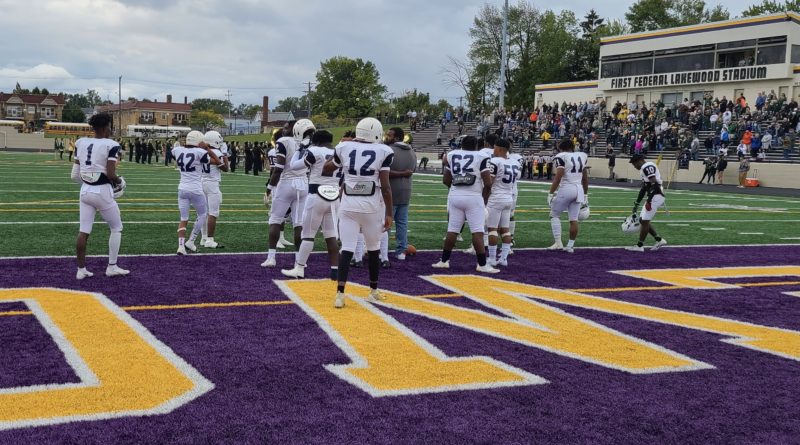 LAKEWOOD, Ohio — When scheduling an opponent for a homecoming game, the goal is to have one you can beat handily. Lakewood St. Edward did just that, defeating Beacon Hill (Virginia) 58-0 on Saturday afternoon.

The Eagles scored four touchdowns on their first 11 offensive plays and led 44-0 at the half, while holding the Beacons to minus-33 yards of total offense in the first two quarters.

When you see the name Beacon Hill and don’t recognize it, don’t worry. You aren’t alone. Even a Google search of the team brings up few results, and nothing of substance.

“We are an independent program,” Beacon Hill head coach Darnell Harris said. “We have some kids who are homeschooled, but a lot of our kids go to smaller private high schools who do not have football.”

Meanwhile, St. Edward plays in the top division in Ohio and entered the week as the No. 2 team in the state’s Division I AP poll and the SBLive Ohio Top 25.

Beacon Hill dressed just 18 players for the game Saturday, while St. Edward had more than 80 players suited up in front of its home crowd.

How (and why) did we get here?

The Eagles were originally scheduled to host Bishop Sycamore this week, but obviously had to pull out of that game when stories began to surface following Bishop Sycamore’s 58-0 loss to IMG Academy on national television.

With the Centurions no longer an option, the Eagles began their search for an opponent to replace them for homecoming weekend.

“When that canceled, we called around to a bunch of different teams and couldn’t really find anyone to commit,” St. Edward head coach Tom Lombardo said. “There was a third-party person we talked to who had this team and they played (Cincinnati) Elder, so we saw them on film that way and they were willing to come right away.”

That game against Elder that Lombardo references? A 47-0 win by Elder. And that final score doesn’t indicate just how bad it was, as Elder scored all 47 points in the first half and played the entire second half with a running clock and without its starters.

One major question for St. Edward, however, is why Bishop Sycamore was slated for this weekend in the first place. After all, the Eagles defeated Bishop Sycamore 35-8 last season, so they knew what the program was all about.

Of the six Ohio schools that had scheduled Bishop Sycamore last season (the game against St. Vincent-St. Mary was canceled), St. Edward was the only one to have them on the schedule again in 2021.

“What we thought of them was that they might have had a post-grad or two, but we didn’t know the extent of anything,” Lombardo said of Bishop Sycamore. “We kind of heard rumors. But they came, and the game was nondescript. We had a game, it was 35-8. We couldn’t find a game. Beggars can’t be choosers.”

And that’s the rub for some of the top programs in Ohio like St. Edward, St. Ignatius, Archbishop Hoban, etc. — they just can’t get teams to play them, especially local teams.

The reasons — or excuses — as to why these other teams won’t play the games are plentiful.

Multiple coaches have expressed concerns with playing these Ohio juggernauts because either that school has already gotten a transfer from that coach’s team in the past, or the coach is worried that playing these teams would give them an up-close and personal look at their best underclassmen in hopes of gaining a transfer in the future.

Also, some coaches want to avoid the probability of losing big and having the game end with a running clock in the second half. Not only does a running clock not help a team when it comes to playoff points in the OHSAA, but it lends itself to fewer teachable moments for coaches.

Others want to play games against opponents they know they can beat so they can accumulate points to improve their playoff seeding.

But at the end of the day, when coaches aren’t willing to step up and play the top competition, it forces teams like St. Edward, St. Ignatius, Archbishop Hoban and others to look elsewhere to fill a schedule.

“It’s either traveling long distances (or games like this),” Lombardo said. “Any time you find a team that’s willing to come, you give them the benefit of the doubt that it is on the up-and-up. Why would you think otherwise?”

One reason many people might raise their eyebrows at this game being played at this point of the season, whether it was Bishop Sycamore or Beacon Hill, was that it comes the week before St. Edward is slated to face its biggest rival, St. Ignatius.

But St. Edward used this game exactly how one would expect with its biggest rivalry game coming next week. The Eagles gave their starters limited reps and then rotated in many of their other players, with almost every one of the over 80 kids dressed seeing game action.

“We got a lot of guys a lot of reps, which is what we wanted,” Lombardo said. “And got some guys healed up who were nursing some things.”

As for Beacon Hill, what do the Beacons get out of driving 475 miles and 7.5 hours from Richmond, Virginia, to Lakewood, Ohio, only to get beat by 58 points, bringing their cumulative season score to 171-0 in three games?

“I wanted to give some of my kids that had the talent to play at the (college) Division II or III level the high school experience they never would have had,” Harris said. “That’s why I try to schedule the first three games against schools like this.”

Another issue being presented by people is the thought that Beacon Hill played this game only for a payday. While nobody would confirm or deny if — or how much — money was exchanged for this game, the optics of it make people wonder.

And if there was a financial incentive for playing the game, it would be the equivalent of the University of Akron taking road games this season at Auburn and Ohio State. There was no chance at coming home with a win, but they secured the all-important bag.

One difference, of course, is that Akron can field an entire team with depth at every position, and they are not kids 15 to 18 years old.

No matter the reason for these games being scheduled, most would agree that there are more negatives than positives to them being played.

Hopefully teams like Bishop Sycamore and Beacon Hill routinely getting embarrassed will force changes down the road. And hopefully for everyone’s sake, those changes happen sooner than later.