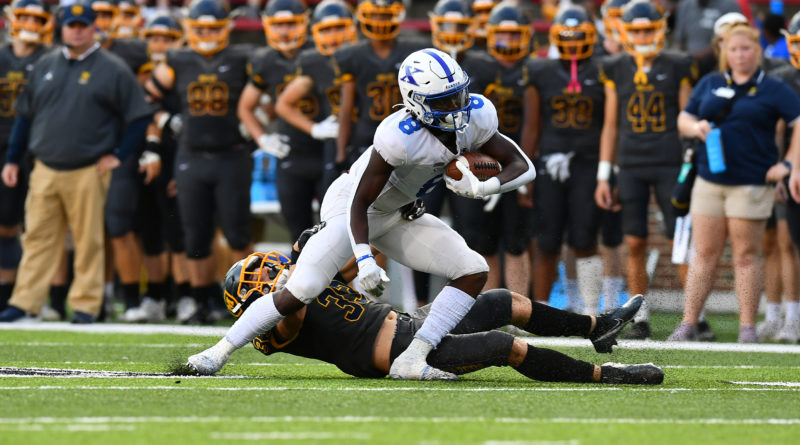 We’re halfway home as we move past the fifth week of our 10-week season. Well, for the lower third of the state.

With the expanded playoffs, twice as many teams will make the postseason this year, 448 in all. That’s 448 teams that will play a Week 11 game.

Now, did Ohio need to expand the playoffs to a ludicrous number? No. Did something need to be done after two undefeated teams missed the postseason in 2019? Yes. But that is a debate for another day.

Last week: 1
RB Charles Kellom ran all over Moeller at the University of Cincinnati’s Nippert Stadium on Friday. The senior put up 210 yards on the ground and four touchdowns as the Bombers secured their place as the top team in the state.

Last week: 2
Up in Northeast Ohio, Danny Enovitch was putting on a show of his own. The senior running back finished with 151 rushing yards and three touchdowns while the defense held Massillon to only 122 yards on the ground.

Last week: 8
Another week, another showcase for Drew Allar. The Penn State commit threw for four touchdowns and ran for the other three as the Battling Bees steamrolled Strongsville.

Last week: 7
Two special teams touchdowns is all Hamilton could muster against Lakota West on Friday. The Firebirds were scoring at will, scoring multiple touchdowns in each of the first three quarters in a rout.

Last week: 4
Back to their winning ways, the Cardinals’ defense suffocated Football North (Canada) all night long. On the offensive side of the ball, Michael Norwood led the way with eight catches for 176 yards and three touchdowns. Mentor hosts Brunswick on Friday.

Last week: 10
Hoban was all lined up to kick the game winning field goal, but the Wildcats’ Griffin Taliak got a mitt on the kick, allowing Franklin Pike to pick it out of mid-air and take it in for a kick-six as time expired Saturday. The last game of the week ended up being the best game of the week.

Last week: 12
The Eagles made a statement after losing to rival Avon Lake last week. The victim was Elyria in Southwestern Conference play. 48-6 was the final score as Avon prepares for North Ridgeville this coming Friday.

Last week: 6
Hilliard Bradley hung with the Tigers for the first three quarters on Friday, going into the fourth tied at 21 before Pick Central pulled away. Isaiah Harper’s 69-yard touchdown run to open up the fourth proved to be the difference as the Tigers improved to 4-1.

Last week: 13
In their last three games, the Fighting Irish have outscored their opponents 107-6. Things are going to get more difficult though, as TCC has Lima Senior, Whitmer and Fremont Ross remaining in the second half of the regular season.

Last week: 3
Dropping seven spots may be a little harsh for the Knights, given how they lost on Friday. However, there is no question that Hoban was overrated from the start. They will still be one of the favorites to win the D-II state championship, but they aren’t the only team in the conversation, unlike last season.

Last week: 5
There was nothing for the Wildcats to prove last week against lowly Beavercreek. Their road contest against Kettering Fairmont this Friday will not be a walkover though, as the Firebirds are Springfield’s toughest opponent since St. Ignatius in Week 1.

Last week: 11
The Lancers handed DuPont Manual (Ky.) its first loss of the season in a 28-24 home win on Friday. La Salle will get ready for its first in-state opponent since Week 2, heading to Archbishop Moeller on Friday night.

Last week: 16
The win over Mayfield was a foregone conclusion. What everybody is looking forward to is the Hilltoppers’ battle of the undefeated when they host Kenston this week.

Last week: 14
Two shutouts in a row for the Golden Bears has to make fans wonder who will be the next team to score against them. No doubt that Upper Arlington has the best chance of going undefeated among Columbus-area teams.

Last week: 9
What in the wide world of sports happened here?!?! The hangover from beating rival Avon was real for the Shoremen, as they hosted Berea-Midpark and surrendered their undefeated season. Despite Avon and Avon Lake being in the SBLive Top 25, it’s Olmsted Falls and Berea-Midpark on top of the SWC.

Last week: 18
It was a TJ Kathman touchdown run with 1:24 left in the game that proved to be the difference between the Thunderhawks and Mason. Lakota East should have fewer issues with Sycamore at home this Friday.

Last week: 15
So much for the battle of the undefeateds this week, as Hilliard Darby suffered its first loss to Gahanna Lincoln. No matter. This week’s game between Darby and the Monarchs will still be must-see TV.

Last week: 21
Are the Bengals the best team in Region 5? Probably. They’ve proven week in and week out that they are a solid top 25 team, while Hoban has been disappointing to say the least. Fans in northeast Ohio can circle Oct. 15 on their calendar for the meeting between those two titans.

Last week: Unranked
The Tigers finally make their way into the top 25 after dominating every opponent put in front of them. The impressive part is they’ve outscored opponents 245-64. However, those opponents have a combined record of 5-20.

Last week: 20
Massillon is not living up to its own lofty standards in 2021, there’s no question about that. However, it should be noted that its only losses have come to Top 10 teams. Plus, outside of Big Walnut, there are no teams in Region 7 that will compete with them once the state playoffs get here.

Last week: 17
The Vikings took a 28-14 lead into the fourth quarter where Fairfield fought back, but could not finish the job as a missed extra point was the difference in Princeton’s 28-27 win. Princeton will face a pair of winless teams in Oak Hills and Middletown these coming weeks.

Last week: Unranked
The Elks haven’t posted a winning record since 2017 when they made it to the second round of the D-I playoffs. They are almost assured of that and more this year, as they have quietly posted a 4-1 record, with their only blemish being a two-point loss at Gahanna Lincoln.

Last week: 24
No surprises as the Greenmen embarrassed Cuyahoga Falls 63-0 this past Friday. Up next is Tallmadge, who at 4-1 should pose a little more of a challenge to Aurora.

Last week: 19
Nobody was surprised by the result against St. X this past week. If there was a surprise, it was the pure dominance against the Crusaders. Things don’t get much easier, as Moeller will host La Salle this week.

Last week: 25
Since a slow start to the season, the Cardinals have looked solid against mediocre competition, posting three straight wins against Mason, Sycamore and Oak Hills. Middletown will be their final cupcake before their end-of-the-season gauntlet.