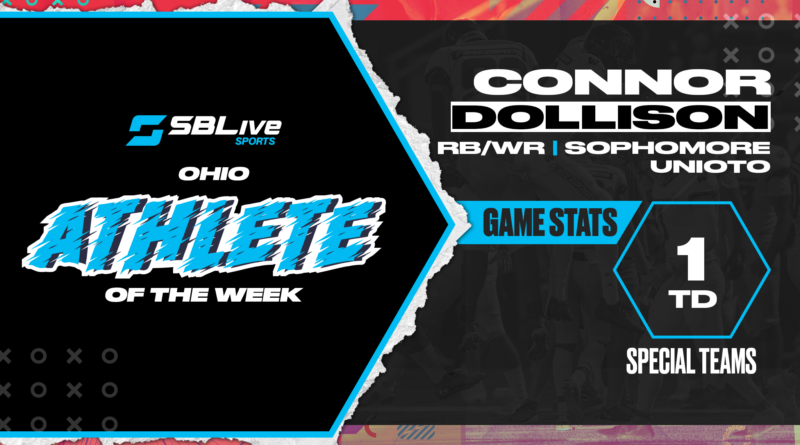 The sophomore led his team to its first win of the season. After Unioto’s game-tying field-goal attempt was blocked, Dollison picked up the ball and snuck into the end zone to give Unioto a 33-30 edge over Huntington.

Dollison ran away with this week’s honor, receiving 96.1% of the total vote.

Beard led his team to its first win against Solon since 2008 by drawing up two big plays to establish the lead. He ran for a 99-yard touchdown in the first quarter, and then he threw a 67-yard dagger in the fourth to finalize the victory at 24-12.

Beseth helped her team go 1-1 over the weekend with a dominant win over Ottawa Hills, 7-1. Across both games, the senior scored three goals and had an assist.

The senior had two interceptions to lead St. Edward to a 48-14 win over Cincinnati Elder. His 45-yard return was the longest of his career.

Hayek made big plays on both sides of the field, doubling as a defensive back and quarterback. He had two interceptions at defensive back, and as backup quarterback he ran for a 4-yard touchdown in the second quarter.

Heisterkamp swung for a top individual score of 66 to earn medalist honors. She helped her team finish second in the Medina Invitational on Sept. 9 where the Blue Streak set a school record score of 300.

With the score tied 1-1 and two seconds remaining in the game, Johnson scored off a throw-in to earn a dramatic 2-1 win over Northwestern.

The senior went 13-for-19 for 168 yards and three touchdowns in a 41-10 triumph over Mishawaka Penn. He also scrambled for a 10-yard score in the first half.

Pierce led her team to a 7-1 win over Lake High School, scoring four goals on Senior Day on Sept. 11. In a 3-0 win over Revere High School on Sept. 9, Pierce also scored a goal.

Schreck had the top individual score with a 39 to help his team notch a 170-180 victory over Bay at Rawiga golf club.

The senior crossed the finish line first in the 5,000-meter finals at Zane Trace Invitational with a time of 20:38:27.

Young threw all four of Harrison’s touchdowns and the game-winning two-point conversion in the final three seconds of the game to edge Trotwood-Madison 29-28.

Zoromski was a menace on defense, racking up 11 tackles (six unassisted, five assisted, four for loss), plus four sacks.