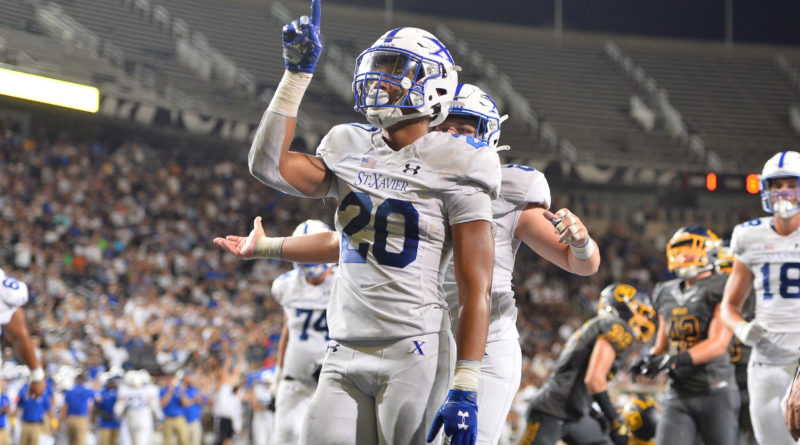 Pictured above is St. Xavier running back Charles Kellom (photo by Ben Jackson), who had the first 200-plus-yard rushing game since 2013 for the Bombers on Friday.

In a 28-21 road win, Macon opened the scoring with a 25-yard carry on third down, the first of his four touchdowns to lift his team past Highland.

Enovitch was responsible for 146 of the Eagles’ 217 yards on the ground. He finished with three touchdowns.

The senior running back finished with 210 rushing yards and three touchdowns in the Bombers’ 49-16 win over Archbishop Moeller.

The Penn State commit broke another school record, this time being responsible for seven touchdowns (four passing and three on the ground). He finished 22-for-32 with 422 passing yards.

Cope scored the game-winner with 6:43 remaining as he found the end zone from 7 yards out.

The junior quarterback was nearly 100%, completing 12-of-13 passes for 181 yards and two touchdowns while also rushing for 59 yards.

Zygmunt excelled on both sides of the ball, making four catches for 140 yards and three touchdowns along with two interceptions.

Goode led the Firebirds to a win by rushing for 111 yards and two touchdowns on 15 carries.

Smoot had three touchdowns (passing for two and running for another while playing just one half) in Springfield’s 42-0 shutout of Beavercreek.

DeTillio found seven different receivers as he threw for 185 yards and two touchdowns, while adding 77 yards on the ground.

Lal racked up 28 carries for 259 yards and four touchdowns against Wadsworth.

Henry finished the night with four touchdowns, including a 40-yard touchdown run to open the third quarter.

White led the way for the Tigers, making his way into the end zone twice in the first quarter to establish a 21-0 lead going into the second quarter.

Moore caught a 38-yard Hail Mary in the end zone to give his team a 20-6 halftime lead.