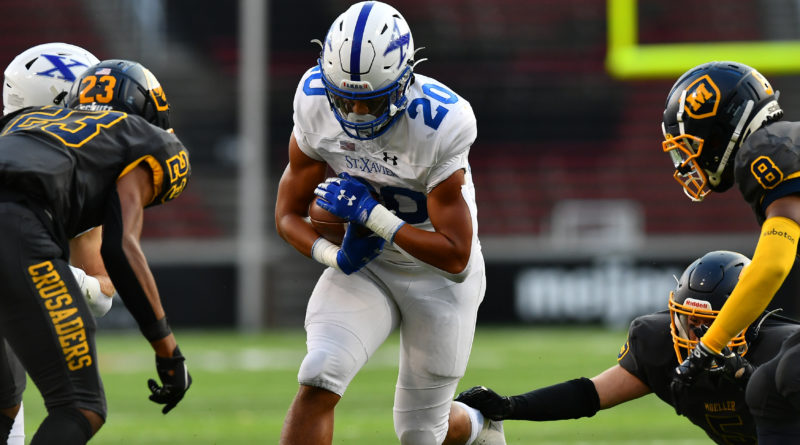 Make that 24 wins in the series now for the No. 1-ranked Bombers, who improved to 5-0 on the season and knocked Moeller down to 4-1 with a dominant performance, especially at the line of scrimmage.

St. Xavier convincingly handled Moeller from the jump, winning 49-16 as the Bombers controlled all three phases of the game. Leading the way was senior running back Charles Kellom, who finished with 282 total yards and three touchdowns.

“My O-line was doing an amazing job creating holes,” Kellom said after a 216-yard rushing game with three touchdowns on 37 carries.

The first half of play nearly all belonged to the Bombers, who scored with ease on their first drive that took just over four minutes and 10 plays. The Bombers came out of the gate crisp and efficient, with their opening drive of 57 yards resulting in a Jay Farrar 8-yard touchdown reception.

Kellom’s 170 yards of offense in the first half alone (114 on the ground) was more than Moeller’s entire offense put up in the half (130).

“Charles (Kellom) is a special talent. I think our offensive line is coming of age,” said St. Xavier coach Steve Specht, who’s in his 17th season at the helm of the Bombers.

Despite quarterback Van George’s first-half struggles, the Moeller offense showed a burst of life following a 56-yard shovel pass to Brandon White, which set up Jordan Marshall for Moeller’s lone touchdown of the half.

The St. Xavier offense was continually set up for success by its aggressive defense, which earned the offense a one-play touchdown drive off a Grant Lyons interception, his third of the season.

The Bombers weren’t comfortable with their 28-10 lead at halftime, as they opened the third quarter with their starters in for the first time since Week 1. Moeller started the quarter strong with a 68-yard touchdown run by Tennel Bryant.

“We haven’t played in the second half since Week 1, so I was interested to see what kind of shape our kids were in,” Specht said.

Seemingly rattled, the Bombers fumbled into the hands of Rashad Glenn, only to have George’s ball immediately intercepted by Eli Kirk.

The St. Xavier defense had George on the run all night, as he completed just 12 of 24 passes for 146 yards and three interceptions. Brogan McCaughey was solid for St. X, throwing for 210 yards on 14-of-21 passing.

Each team has another big game next week, as the Crusaders take on La Salle at Shae Stadium while the Bombers host Elder at RDI Stadium, both at 7 p.m.

“Elder High School has one of the best all-purpose players I’ve seen in a long time in Drew Ramsey,” Specht said of what his team will be focusing on most in Week 6.