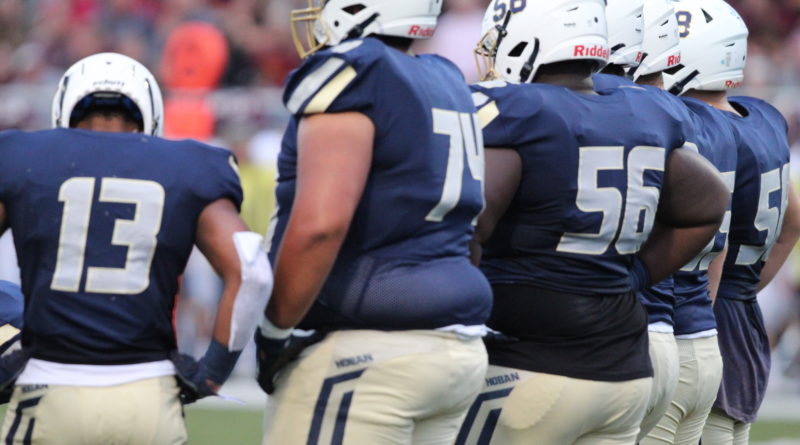 AKRON, Ohio — It was a hot late-summer Ohio night in August when I was introduced to Bishop Sycamore.

Little did I know that the heat was just starting to get turned up on the most infamous “high school” in America.

Bishop Sycamore became a household name among sports fans after a 58-0 loss Aug. 29 to IMG Academy on ESPN in which the “school” began to get exposed for not being what it had sold itself to everyone they contacted.

But the week before, the Centurions had been in Akron to play against Archbishop Hoban, one of the premier high school football teams in Ohio, in the first week of the season on Aug. 19.

I was assigned to cover the game as a freelance writer for cleveland.com, a 38-0 win by Hoban. This is my experience with what would soon become the most discussed story in high school sports in 2021.

I had known about Bishop Sycamore because they played Massillon Washington last season and were also scheduled to play Akron St. Vincent-St. Mary last season in a game that was canceled in the week leading up to it (more on that later).

I knew we would be dealing with a nontraditional high school, one that was supposedly put together to give guys another chance to follow their dreams of playing college football.

My normal routine on a game day is to arrive at the stadium a couple of hours before kickoff, especially early in the season when I haven’t had a chance to see the teams I’m covering that night in previous games. I make it a habit to talk to the coaches before the game just to get any information that might be useful that night, and this game was no different.

After arriving and putting my stuff in the press box, I headed down to the field, where I spotted Hoban head coach Tim Tyrrell. With Hoban being a powerhouse in the area (five state championships in six seasons), I have had a lot of opportunities to cover the Knights, and also have had plenty of conversations with Tyrrell. We discussed the offseason and what he was expecting out of his young team after they had lost a lot of guys from last year’s state title run.

And then I approached the subject of that night’s opponent — Bishop Sycamore.

Tyrrell told me Bishop Sycamore had told him that they had multiple guys with high Division I college offers, including five wide receivers, and that the quarterback had an offer to Arizona. He told me that they had kids from all over the country on the team, and that he was under the impression they were indeed a school just trying to give guys that last shot at getting to the next level.

Tyrrell then told me he had been informed by the Ohio High School Athletic Association that this game would not count toward Hoban’s record because the OHSAA does not recognize Bishop Sycamore as a member organization. Therefore, this night’s game would be nothing more than a glorified scrimmage and could be treated as such if the teams chose to do so.

After chatting with Tyrrell, I headed back up to the press box to grab rosters so I could familiarize myself with the Centurions and then talk to their head coach, Roy Johnson, to get any information on his team that I might need for the night. When I grabbed the “roster” provided by Bishop Sycamore, all I could do was laugh.

It contained 26 names. No numbers. No designation for whether the player was a senior, junior, sophomore or freshman. And the players were listed under position categories: “QuarterBack,” “Running Back,” “O/D Line,” “Wide Receivers,” “LineBackers,” “Defensive Backs” and “Athletes.” That’s it. That was the entire roster.

The laugh I had when Hoban assistant athletic director Matt Bing gave me the roster and said that was all they had received? That laugh takes us back to last season’s game that was canceled between Bishop Sycamore and St. Vincent-St. Mary.

After speaking with people inside the St. Vincent-St. Mary program, I found out part of the reason for the cancellation was because — you guessed it — Bishop Sycamore couldn’t (or wouldn’t) provide an accurate roster before the game.

In fact, there were rumors that the game against Massillon the next week might be canceled for the same reason. It wasn’t, as Massillon rolled the Centurions 35-0.

As I looked over the rosters Aug. 19, I received a direct message on Twitter from Ben Ferree, former assistant director of officiating and sports management at the OHSAA, asking me to call him because he had some information I might be interested in regarding Bishop Sycamore and Coach Johnson.

I walked out of the press box and called Ferree. In the six minutes that followed, he outlined issues Johnson has faced in the form of lawsuits, criminal charges and an outstanding warrant for his arrest.

He then gave me a heads-up that Delaware County sheriffs might be making the trip to Akron that night to serve that arrest warrant. You know, the normal Friday night high school football stuff.

I thanked Ferree and went about my preparation because I didn’t really have an outlet for the information he had given me, even if there was a possibility that my night would include a high school coach in handcuffs.

I had still not talked to Johnson, so I went to search him out about 45 minutes before the game. As I did this, I noticed Hoban’s public address announcer, Brian Saus, talking to someone near the Bishop Sycamore locker room and holding the roster we were given.

Saus was trying to get numbers and pronunciations for the players so he could properly identify them throughout the night. This coach was asking players their names as they walked past him and gave a few extra names to Saus that had not been on the original roster.

You read that right — the coach was asking players for their names.

Meanwhile, players were putting on their uniforms outside because the uniforms had just arrived.

Yes, we were less than an hour until the game was scheduled to begin and Bishop Sycamore did not have uniforms. And when the jerseys finally arrived, they were black, while Hoban was wearing navy blue.

Once Saus walked away, I went over and introduced myself to the coach, who identified himself as Roy Johnson. It wasn’t until a couple of weeks later that I learned the person was not Johnson, and that Johnson had not even attended the game.

That’s Roy Johnson, the (now-former) head coach of the team, who did not even show up at the stadium for the game.

All of this and we hadn’t even kicked off yet.

As we approached game time, Bishop Sycamore was late coming out to the field, presumably because the Centurions had players who were not eligible to play. They had several older players whom teams had told them not to bring to games, but they did so anyway.

The Centurions received the opening kickoff, which was a touchback. The officials placed the ball and blew the whistle for play to begin. Hoban’s defense was lined up and ready to get its first snaps of the season.

But the Bishop Sycamore offense? Nowhere to be found. Bishop Sycamore ran the play clock all the way down and then called a timeout without even sending the offense out. It seemed like a perfect way for this game and season to start, given what we later learned.

Once the Centurions did take the field, it was quickly obvious that they had not practiced much together, if at all, and that they were not a good team. As it turned out, this night was the first time they had been in pads together.

It was also pretty evident that these highly touted recruits we had heard about were nothing more than a fable sold by Johnson and his people.

While Hoban struggled out of the gate as well — they were starting a new quarterback and several new starters on both sides of the ball — the Knights took a 10-0 lead into halftime of a game that nobody would be using to teach the game of football.

But the Knights kicked it into gear in the second half and scored 28 unanswered points.

While Hoban picked it up in the second half, the Centurions continued to struggle in all phases of the game. It led to those of us on the sidelines hearing one of the players screaming across to a teammate about how he wasn’t flown in from California to lose like this.

What I meant was that their players seemed to have the athleticism to catch a pass and run away from you on a broken play, but they didn’t have the football talent to have a sustained drive that leads to a score. It’s basically the same way I have always played Madden.

The worst part of the game was the fourth quarter, where Bishop Sycamore was flagged multiple times for personal fouls and even knocked Hoban starting quarterback Jayvian Crable out of the game with what many considered a cheap shot on the Knights signal-caller.

At one point, I was talking to an official during a timeout, and he basically told me they were just trying to get the game to its end without anyone else getting hurt or a fight breaking out.

Thankfully, we made it to the end of the game without more excitement.

But as we know now, the excitement for Bishop Sycamore (and everyone who was somehow involved in this story) was just beginning.