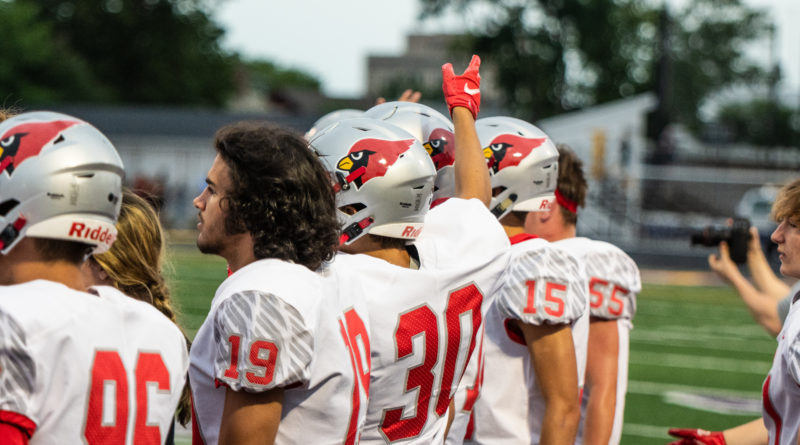 The game of the week and one of Ohio’s premier high school rivalries was at the University of Cincinnati on Friday night, but No. 1 St. Xavier kept No. 19 Archbishop Moeller out of the game all night in a 49-16 win.

The only thing that could slow down Medina quarterback Drew Allar was the stadium lighting at Strongsville. The game had to be called early when one of the lights malfunctioned, resulting in a 48-13 final.

And Mentor (photo above by Christian Harsa) made easy work of a prep school from Canada.

It took St. X until the fourth quarter to induce the running clock this time, but the Bombers ran all over the rival Crusaders.

The Eagles amassed 450 yards of total offense and allowed just 252 to improve to 5-0.

Mentor prevails against a prep school from Mississauga, Ontario.

Springfield raced to a 35-0 halftime lead and then eased up in the second half.

Tied 21-21 after three quarters, Pickerington Central dominated the fourth to rebound from its overtime loss last week to Pickerington North.

Lakota West has blown out all of its opponents since the Firebirds’ opening week loss to St. X.

Penn State recruit Drew Allar dominated with his arm and his legs as Medina improves to 5-0.

Berea-Midpark springs the upset of the week at Avon Lake, as the Shoremen suffer a letdown after their huge win in Week 4 over Avon.

La Salle grabs its second straight win over a Kentucky opponent in a hard-fought contest.

Avon bounced back from a crushing loss last week by cruising past Elyria.

After getting off to just a 3-0 lead after one quarter, Central Catholic poured on the points to improve to 3-2.

Upper Arlington outgained Central Crossing 287-156 to earn a quick win on the road.

After cruising past Westland, Marysville has a big game next week against Hilliard Darby, which suffered its first loss of the season Friday to Gahanna.

Princeton took a 28-14 lead into the fourth quarter and hung on to beat one-win Fairfield by one.

The Thunderhawks had a tough time with Mason (2-3) but improved to 4-1.

The Crusaders struggled to stop the run and contain St. Xavier’s pass rush to lose their first game of the season.

The Tigers kept it close for a while against No. 2 St. Edward but fell short.

Benedictine had a bye week.

The Explorers’ ground game was too much, as Aiden Lal racked up 259 yards and four touchdowns on 28 carries.

The Big Red fall from the ranks of the unbeaten as Dover pulls away late to remain undefeated.

The Greenmen roll to 5-0 with another blowout win.

The Cardinals improve to 3-2, with their losses losses coming against La Salle and St. X.