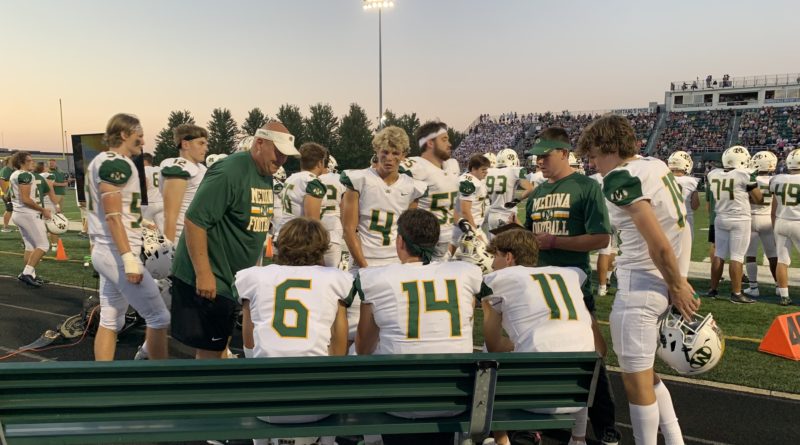 STRONGSVILLE, Ohio — Bold offensive play-calling and the arm of senior quarterback Drew Allar were the stories of the game in a matchup between Medina and Strongsville on Friday night at Pat Catan Stadium.

The tone of this Greater Cleveland Conference matchup was set early when the Bees called a triple-pass on their first play of the game. Allar threw a screen before having the ball tossed back to him. He flipped his hips and found junior Brennen Schramm for a 52-yard touchdown, and the rout was on.

Allar, a Penn State commit, finished with 422 passing yards and a school-record seven total touchdowns: four passing and three on the ground (all 1-yard QB sneaks). He went 22 for 32 with no turnovers.

Coach Larry Laird has grown accustomed to that type of production from the 6-foot-5, 217-pounder, who will graduate in December and be at Penn State by January.

“It’s the standard at this point,” Laird said with a laugh.

But Laird emphasized that Medina’s high-flying offense does not rest on Allar’s shoulders alone.

“Tonight the offensive line looked outstanding,” Laird said. “And (regarding) our receivers, I ask them ‘Can I trust you?’ And right now we have seven guys that I trust.”

The Bees’ depth at wide receiver was abundantly clear, as Allar connected with five receivers for points (four touchdowns and a two-point conversion).

Two of those touchdown scorers went for more than 100 yards, as Jajuan Jackson had 112 and Michael Rodak added 105.

Two more Medina receivers fell just short of the century mark, as Schramm and Ben Butler had 95 and 93, respectively.

Allar was quick to credit the offense around him with his success.

“It’s a great luxury for me,” he said. “It’s really a great credit to everybody and how hard they worked all offseason, as well as the offensive line giving me time to find those wide receivers. Then they make plays after they catch the ball.”

In contrast to Medina’s air-raid attack, Strongsville did its best work on the ground.

Senior running back Anthony Gentile was a workhorse for the Mustangs, gaining 176 yards on 24 carries. He provided Strongsville a massive spark to start the second half, breaking off a 72-yard touchdown that would be the longest play of the game for either team.

Sparks also flew in the waning minutes of the fourth quarter, as the game had to be called early when one of the stadium lights malfunctioned.

The Strongsville offense struggled for the most part, and it would prove to be the Mustangs’ only touchdown of the evening.

Senior Strongsville quarterback Maddux Beard struggled to find his groove in the offense but still finished with 153 total yards.

“We still have a lot to work on,” Laird said. “Our defense looked good, but we gave up too many yards. I know my coaches and players (on defense) will get it fixed.”

Medina is undefeated this season and has won nine of its last 10, but the Bees are not satisfied with where they are now.

“We’ve been on a hot streak recently,” Allar said. “But tomorrow we’ve just got to put that aside, watch the film and see what we have to correct and then come back next week.”

Medina will stay in conference to host Euclid (0-5) for homecoming next Friday. Strongsville will once again take on an undefeated team, traveling to play out-of-conference Cleveland Heights (5-0).