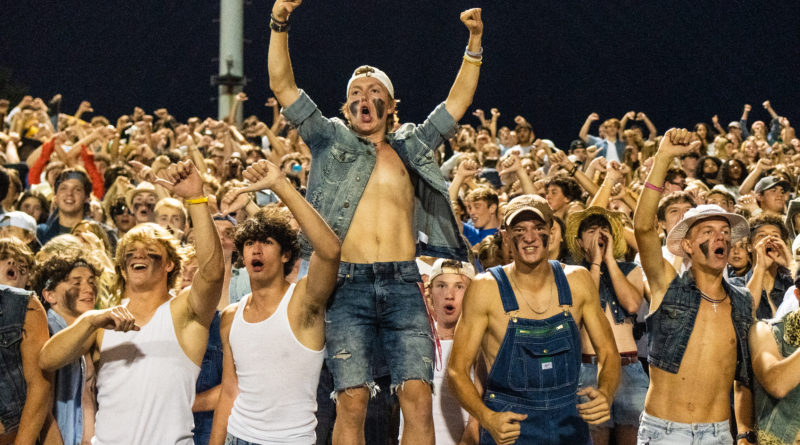 College football wasn’t the only place for a weekend of upsets.

In Ohio, plenty of traditional rivals faced off in games that shaped the landscape of high school football.

Who came away with bragging rights and a clearer path to a state title?

Last week: 1
The Bombers jumped out to a 21-0 lead in the first quarter and never looked back in a rout of Penn (Ind.) this past weekend. Finishing with a 41-10 win, St. X now preps for undefeated Archbishop Moeller this Friday.

Last week: 2
The Eagles put a hurtin’ on Elder, scoring three touchdowns off of interceptions on the night and leaving Cincinnati with a 48-14 win and knocking the Panthers out of the SBLive’s Top 25.

Last week: 4
The Knights appear to be getting back on track as they headed down to Kettering to come away with a 27-14 over traditional power Archbishop Alter. Hoban gets a huge test next week at St. Ignatius.

Last week: 6
North Allegheny, after being blown out by Pickerington Central, took out its frustrations on the Cardinals. Playing without their starting QB and outgaining North Allegheny by over 100 yards, the Cardinals fell late by a score of 20-16.

Last week: 5
How did Mentor climb despite losing? Well, several lackluster performances among the top teams, the Wildcats being no exception. Going into halftime tied up with Wayne, only one more score came in the third quarter, but it would prove to be the difference.

Last week: 3
Oct. 4, 2013. That is the last time Pickerington North beat crosstown rival Pickerington Central in football. Until this past weekend. North’s field goal in overtime snapped the Tigers’ seven-game winning streak in the series.

Last week: 9
Since their opening-week loss to St. X, the Firebirds have looked unbeatable, outscoring their opponents 112-24. Looking forward, it’s realistic for the Firebirds to be 7-1 going into their final two weeks against Colerain and Lakota East.

Last week: 7
Penn State recruit Drew Allar lit up Stow-Munroe Falls, going 29-for-50 with 523 yards and five touchdowns, handing the Bulldogs their first loss of the season in glorious fashion.

Last week: 13
It was a tale of three parts. Avon jumped out to a 10-0 lead in the first quarter. Then the Shoremen scored 30 points that went unanswered in the first half. Finally, Avon attempted a comeback but fell just short, 30-24. The Shoremen are now the heavy favorites to carry the Southwestern Conference.

Last week: 11
The Wildcats took a week off from their gauntlet of a schedule to beat up on winless Euclid. St. Ignatius scored four straight touchdowns to end the first half and never looked back. The Wildcats host Hoban in a must-see contest in Week 5.

Last week: 8
The Lancers rebounded well after being dismantled by IMG Academy. La Salle outgunned Trinity (Ky.) in its first road contest of the season, 48-27. The Lancers will host DuPont Manual (Ky.) on Friday.

Last week: 10
Despite a heartbreaking loss, there is a silver lining for the Eagles. The next six games are all very winnable, with a home game against Olmsted Falls on Oct. 1 being their toughest contest. An 8-2 finish is a very real possibility.

Last week: 18
The last two weeks have shown why the Fighting Irish stayed in the SBLive Top 25 even after a 0-2 start. Junior QB Ty’Waun Clark carved up the Findlay defense with three touchdowns through the air and one on the ground.

Last week: 19
After struggling with a woeful Reynoldsburg team in their opener, the Golden Bears have looked unbeatable, outscoring their last three opponents by a combined 117-21. It might be too early to call it, but a Pickerington Central vs. Upper Arlington final in Region 3 could be only a matter of time.

Last week: 15
Not to look too far ahead, but the Monarchs might be on a crash course for a battle of the unbeatens in Week 6. Assuming they take care of Westland, they would host a currently undefeated Hilliard Darby team on Sept. 24.

Last week: 17
Finally getting to some of the smaller schools in our Top 25. After some tension in holding off Ursuline, there was no such drama in Week 4 as the Hilltoppers comfortably dispatched of Riverside, 28-7.

Last week: 12
All good things must come to an end, and that’s what happened with the Vikings’ undefeated streak this past Friday. A 24-0 shutout at Lakota West sent Princeton down the rankings. The Vikings will host one-win Fairfield this weekend.

Last week: Unranked
Welcome to the Top 25, Thunderhawks. The computers didn’t think much of you after your opening loss to Archbishop Moeller. But since then, not only has Moeller proven to be a strong team, you have too. The Thunderhawks’ high-powered offense has averaged over 41 points per game so far this season.

Last week: 20
The Crusaders looked like their old selves against D-V Ironton on Friday. But that’s not what anybody is talking about. The talk of the town is their home contest against top-ranked St. Xavier this Friday.

Last week: 14
The Tigers were less-than-stellar in a nail-biter against Warren G. Harding. Massillon had things wrapped up before two late touchdowns by the Indians put the end result in doubt. They will need to do better if they want to compete with No. 2 St. Edward this week.

Last week: Unranked
The Bengals return to the Top 25 after a one-sided affair with Bishop Hartley. Senior WR Marvin Conkle led the way with 116 yards and a touchdown.

Last week: 25
The Explorers finally found the ability to blow out an opponent, stomping Twinsburg 49-6. They open a three-game home stand against Wadsworth this Friday.

Last week: 21
After shutting out University Prep (Pa.) on Friday, the Big Red get their first true road game of the season against fellow undefeated Dover on Friday night.

Last week: Unranked
Like other two-loss teams in this Top 25, when it’s clear that your losses are to good opposition, you will get the benefit of the doubt. In the case of the Cardinals, their losses are to La Salle and St. X. While wins against Mason and Sycamore don’t turn heads, they are worth keeping an eye on.