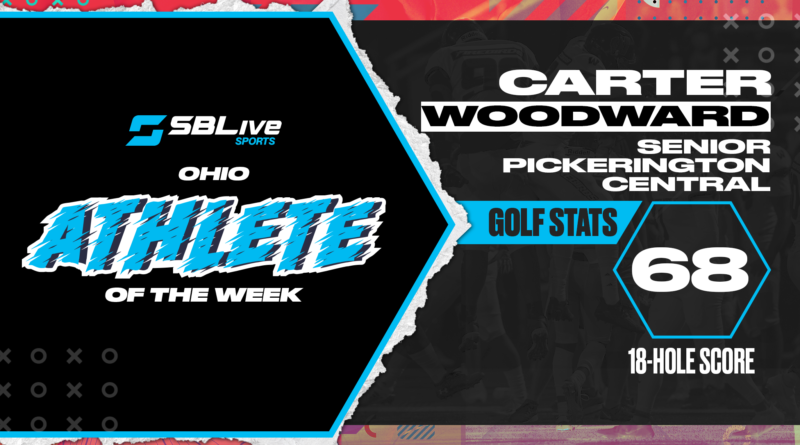 The senior broke a school record with a 68 (including a birdie on his last hole) to place as a medalist at the Bexley Invite on Sept. 4. His team won with a school-record 296.

Woodward received 62.32% of the vote, beating out Turpin’s Keenan Alcalde, who finished second with 30.14%.

Keenan Alcalde, Turpin football: Alcalde carried 26 times for 246 yards and scored all five of Turpin’s touchdowns in a 38-34 seesaw win over Loveland.

Alex Brown, Buckeye Valley soccer: The senior midfielder had back-to-back hat tricks in 6-3 and 7-0 wins over Pleasant and Beechcroft, respectively. He totaled 13 points and nine shots across both games.

Tim Conwell, Avon football: Conwell had eight receptions for 120 yards and three touchdowns, including a 26-yard strike to lead his team past Glenville 55-18.

T.J. Engleman, Princeton football: In the sophomore’s third varsity start, he threw a pair of 35-yard touchdown passes and rushed for 90 yards and a touchdown to lead Cincinnati Princeton past Dublin Coffman 44-14.

Madeleine Finton, Columbia cross country: The Columbia senior finished in first place of the Gold Division race on Sept. 4 at the 42nd Avon Lake Earlybird invitational with a time of 19:44.9. Finton became the second Lorain County girl to win the event, dating back to 2000.

Noah Geselbracht, Archbishop Moeller football: In a road win, the signal-caller threw three touchdowns passes in the third quarter, redeeming himself from throwing an interception on his first drive. Moeller pulled off a 39-22 win, dealing East Central (Indiana) its first loss of the season.

Carly Hendrickson, Mount Notre Dame volleyball:The Florida Gators commit had 34 kills, three aces, 12 digs and two blocks in a 3-1 win over Ursuline Academy on Aug. 31. On Sept. 2, she had 31 kills, 12 digs, three blocks and an ace in a loss to St. Ursula.

Terrell McFarlin, St. Xavier football: McFarlin had five catches for 105 yards and two touchdowns vs. Olentangy Liberty. The senior was his team’s leading receiver in the 49-0 shutout win.

Christian Ramos, St. Edward football: Ramos completed 16-of-20 passes for 249 yards and rushed for another 46 yards on eight attempts. He had four touchdowns (including three rushing scores), to lead St. Edward to a 47-7 win over Mentor.

Ella Schneider, Granville soccer: Schneider had two goals and one assist in a 10-1 victory over Heath on Sept. 2.

Lamar Sperling, Archbishop Hoban football: In a career-high performance, Sperling rushed for 271 yards and three touchdowns on 42 carries. Hoban came out on top in a 35-34 double overtime win over Walsh Jesuit.