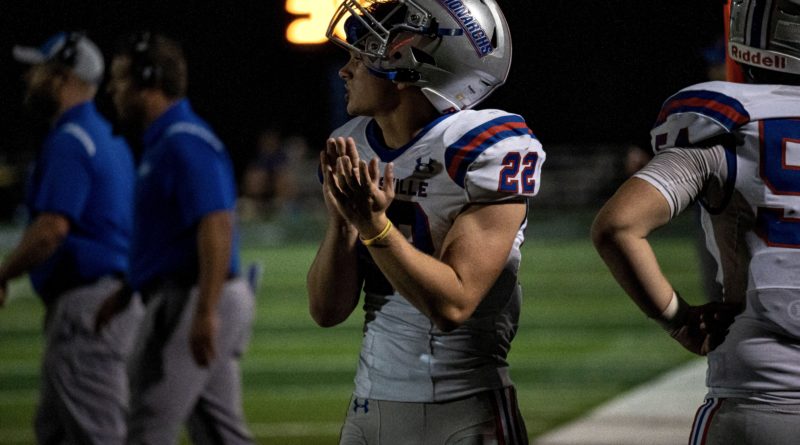 Pictured above is Marysville running back Griffin Johnson (photo by Gabe Haferman), who rushed for 120 yards in the Monarchs’ win at Hilliard Bradley.

In a 38-27 triumph over previously undefeated Stow, Allar put together a career-high performance, completing 29-of-50 passes for 523 yards and five touchdowns.

The junior standout had five receptions for 111 yards and two touchdowns in the first half. Avon Lake took the game 30-24, recording its first win against Avon since 2018.

In establishing an early lead over Solon, Beard drew up a draw play and ran for a 99-yard touchdown in the first quarter. Then in the fourth quarter, he threw a 67-yard dagger to finalize the victory at 24-12.

Luani had 16 carries for 145 yards and three touchdowns, averaging 9.1 yards per carry. His longest rush of the day was a 60-yard carry.

As Unioto went for a 34-yard field-goal to potentially tie the game, the attempt was blocked, but Dollison picked up the live ball and ran into the end zone to give Unioto the 33-30 edge over Huntington.

Smoot scored three touchdown runs to help hold off Wayne 21-14. He scored the only touchdown by either team in the second half with a 20-yard run.

In an easy win over Euclid, Tompkins caught five passes for 91 yards and three touchdowns.

For the second consecutive week, Kathman threw three touchdowns to lead his team to a 54-21 Friday night victory.

The California commit rushed for 155 yards and a touchdown on 14 attempts.

The senior went 13-for-19 for three touchdowns. He also scored in the first quarter on a 10-yard rush.

Young threw all four of Harrison’s touchdowns including the game-winning two-point conversion with three seconds remaining for a 29-28 final.

Horvath finished with 209 rushing yards and two touchdowns on 23 carries to lead Hilliard Darby to a 29-23 rivalry win over Hilliard Davidson.

Hayek made big plays throughout the night on both sides of the ball. At defensive back he had two interceptions, and at backup quarterback he had a 4-yard touchdown run in the second quarter.

Johnson rushed for 120 yards on 18 carries in Marysville’s 27-7 win over Hilliard Bradley.

Pierce was the game’s leading receiver, making three receptions for 150 yards and a touchdown.

Burgess had 18 carries for 85 yards and two touchdowns and a pair of catches for 38 yards, helping to propel North Olmsted to a 27-17 victory over Buckeye.