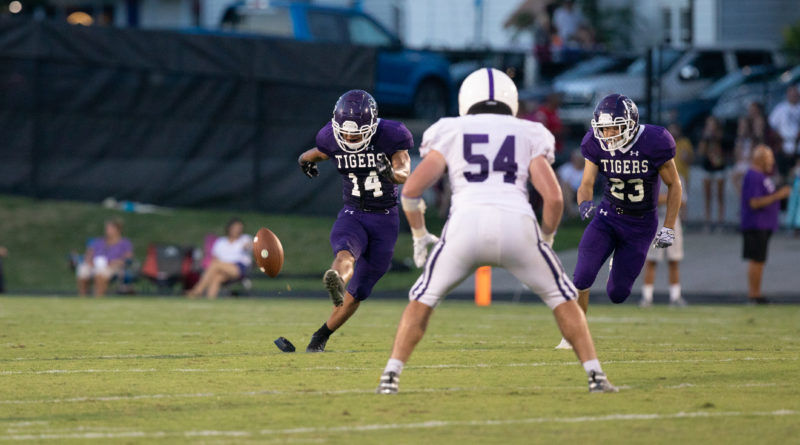 The upset of the night came in one of the Columbus area’s best rivalries, as Pickerington North knocked off No. 3 Pickerington Central in overtime.

And in another storied crosstown rivalry in northern Ohio, Avon Lake won a turnover-filled thriller at Avon.

Another game, another running clock for St. Xavier. The Bombers hit the road again next week for a big game at Archbishop Moeller.

The Tigers’ defense remained stout but the offense couldn’t get going against their crosstown rivals. After Pickerington Central missed a 28-yard field goal to end regulation, Pickerington North converted the winning kick in overtime.

After surviving a double-overtime thriller last week, Archbishop Hoban hangs on again to eke out a tough win over Archbishop Alter.

Three touchdown runs by QB Te’Sean Smoot were enough for Springfield to hold off Wayne.

The Cardinals held a 10-3 lead at halftime and suffered a hard-fought loss in western Pennsylvania to fall to 2-2.

La Salle’s balanced performance was too much for the Kentucky hosts to keep up with.

The Firebirds won the de facto GMC championship in convincing fashion and earned coach Tom Bolden his 150th career win (against only 27 losses).

Turnovers plagued Avon, but the Eagles put up a fight in the fourth before conceding the Silver Rail to Avon Lake.

The Wildcats’ dominant second and third quarters were enough to put away winless Euclid.

The Vikings couldn’t find any offense at Lakota West and suffered their first loss of the season.

The Shoremen are in the driver’s seat for the Southwestern Conference title after handling crosstown rival Avon in thrilling fashion.

Massillon Washington withstood a furious fourth-quarter rally to win its first road contest of the season.

The Monarchs’ defense continues to impress, having allowed only 13 points in three games this season.

The Hilltoppers’ defense was stout Friday night, giving up no points until the waning minutes of the fourth quarter.

The Fighting Irish raced to a 27-0 lead after one quarter and then cruised to their second straight win after an 0-2 start.

The Golden Bears made easy work of Westerville Central.

Moeller’s defense looked dominant against previously undefeated Ironton, and now No. 1 St. Xavier and No. 8 La Salle loom next.

The Big Red handed another beat-down to another out-of-state opponent.

The Falcons set themselves up for the game-winning field goal after a back-and-forth game, but Ursuline blocked it to secure the win.

That’s three easy wins in a row for Sreetsboro, but the 24-point margin Friday was by far its smallest yet.

After three close wins to start the season, Hudson exploded Friday, taking a 35-0 lead into halftime.