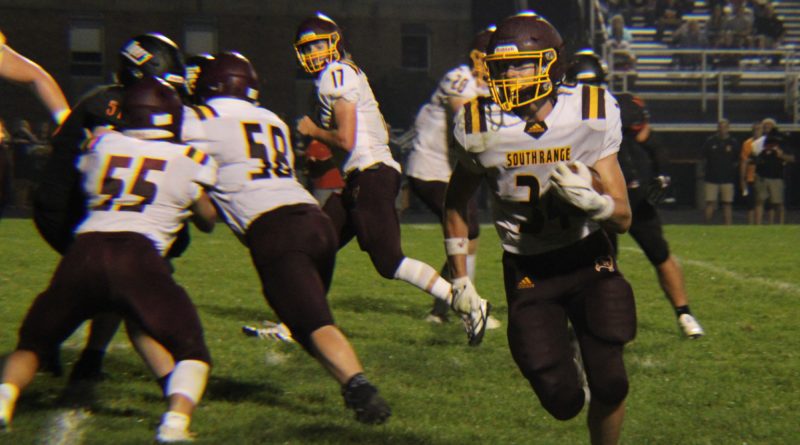 Pictured above is South Range running back Dylan Dominguez, who rushed for 179 yards and two touchdowns on nine carries Friday night.

McFarlin had five catches for 105 yards and two scores as St. Xavier made easy work of host Olentangy Liberty.

Sperling rushed for a career-high 271 yards and three touchdowns on 42 carries to lead Archbishop Hoban past Walsh Jesuit in what could go down as the game of the year in Ohio high school football.

Alcalde ran for 246 yards and all five of Turpin’s touchdowns in a back-and-forth, 38-34 win over Loveland.

Allar completed 32-of-43 passes for 391 yards and four touchdowns, also carrying 10 times for 73 yards in Medina’s 35-0 win over Wadsworth. He broke the Medina County record for career touchdown passes (57).

Flowers’ 51-yard touchdown run in the fourth quarter capped an 18-carry, 164-yard night along with two TDs to lead Colerain past Mason 21-16.

Hartson rushed 28 times for 223 yards and two touchdowns in a win over Reynoldsburg, and Ohio State’s running backs coach saw the whole thing.

Just hours after getting fit for his All-American Game jersey, the 330-pound Tshabola helped open holes all night in Lakota West’s 43-17 win over Oak Hills.

Barnes scored two touchdowns in the fourth quarter to lift Buckeye to a thrilling 27-26 win over Copley.

Geselbracht rebounded from throwing an interception on his first drive by tossing three TD passes in the third quarter to deal East Central (Indiana) its first loss of the season.

Engleman threw a pair of 35-yard touchdown passes and ran for 90 yards and a score in leading Cincinnati Princeton past Dublin Coffman 44-14.

Conwell had eight catches for 120 yards and three touchdowns in an all-around dominant performance by the Avon offense against Glenville.